A column over the weekend by the Reno Gazette-Journal’s Chris Murray talks about Nevada striking while the iron is hot to become a “national program” in college basketball. Not surprisingly, the bottom line is money—investing in men’s hoops. What was eye-opening was a list Murray included that showed what each Mountain West school spent in 2016-17 on men’s basketball (excluding Air Force), according to the U.S. Department of Education . At the top is San Diego State at $5,924,498. Boise State is second-to-last at $2,821,386, less than half of what the Aztecs (and UNLV, for that matter) spend. So here are the Broncos, the only team in the Mountain West to land a top-three seed in the conference tournament in each of the last four seasons. Reason to appreciate the sometimes underappreciated Leon Rice.

One way to view it: Boise State’s cost-per-victory is really low—$141,000 based on the 20 wins the Broncos had in 2016-17. San Diego State’s cost-per-victory was $311,800. And how about UNLV, which spent $5,888,664 on men’s hoops a year ago? The Rebels spent $535,300 per win in 2016-17. Boise State’s NCAA Tournament pedigree isn’t what anyone wants, but based on money spent, methinks Rice is a good value. The Broncos have six straight 20-win seasons, the longest streak in the Mountain West, and seven 20-win campaigns in eight years under Rice. Boise State had just seven 20-win campaigns combined in 40 Division I seasons before he arrived.

For the record, Nevada was fifth in Mountain West men’s basketball spending in 2016-17, with an investment of $3,396,777. That rose this past season as the Wolf Pack upped coach Eric Musselman’s salary, and it will probably rise again. Third in the conference was not New Mexico, but Colorado State, at $4,512,525. The Lobos were fourth with $4,130,599. The only publicly-reported school spending less than Boise State was San Jose State at $2,012,188 (although Air Force was likely lower as well). Clearly, the Bronco program needs more funding if it’s to grow. Talk amongst yourselves.

It’s Hall of Fame week at Boise State, with the first induction class in 10 years set to be honored Friday night. The group includes two football players, Kellen Moore and Nate Potter. It’s no secret that there’s a huge backlog of deserving players since the turn of the century, so it’s going to take a while (the ceremonies will be held every other year). In his Opinionator column at KTIK.com, Mike Prater has come up with an “All Non-Hall of Fame” football team. And he didn’t create an easy out for himself, restricting his team to 11 players on offense and 11 on defense. So Prater has one quarterback: Ryan Dinwiddie, who exponentially raised the bar from 2000-03 and has since taken his offensive mind into the coaching world as quarterbacks coach of the Calgary Stampeders in the CFL.

From there, Prater got into debate territory with Boise State non-Hall of Fame running backs. He took Brock Forsey and Ian Johnson over Doug Martin, Jay Ajayi and Jeremy McNichols. Based on what they did while they were Broncos, you can’t go wrong with Forsey and Johnson. Forsey came out of Centennial High as a walk-on and ended up as one of the top career scorers in college football history. Johnson’s junior and senior years did not compare to his sophomore campaign, but that one season helped lift Boise State to heights nobody could have imagined, capped by the Statue of Liberty in the 2007 Fiesta Bowl. I don’t know how you differentiate at wide receiver. Prater went with Matt Miller and Thomas Sperbeck. Can I please rule it a tie with Austin Pettis and Titus Young?

The next-toughest position group was the secondary. Prater cut himself some slack by creating a 3-3-5 defense, with five defensive backs. Still, this is tough. He chose Kyle Wilson and Jamar Taylor as cornerbacks, George Iloka and Darian Thompson at “cornerback/safety,” (well, Iloka did play some corner), and Quintin Mikell as a safety. All of them were NFL Draft picks except Mikell, who nevertheless ended up having the longest NFL career of any of them. It’s about what they did as Broncos, of course, and Mikell changed the way we thought about the prototypical Boise State defender when he helped usher in the school’s golden era upon his debut in 1999.

That’s all good. But try these names on for size: Orlando Scandrick, Donte Deayon, Gerald Alexander, Jeron Johnson and Marty Tadman. Talk about playmakers. Consider Scandrick’s two scores on returns of blocked kicks at Hawaii in 2005, Alexander’s vertical-leap block of a last-minute field goal during “Breakfast With The Broncos” at San Jose State in 2004, preserving an undefeated regular season, and Tadman’s two interceptions in the 2007 Fiesta Bowl, one of which was a pick-six as he earned Defensive MVP honors. Sheez.

BYU spring football wrapped up Saturday with the Cougars’ spring game, and five different quarterbacks directed at least one drive. One of them wasn’t Eagle’s Tanner Mangum, who didn’t participate in any 11-on-11 drills this spring as he recovers from last fall’s Achilles injury, but he did get plenty of 7-on-7 work. Mangum’s progress in player-run practices this summer will be key as he tries to retain his starting job. Of the QBs who played Saturday, sophomore Joe Critchlow was the most impressive, completing 9 of 12 passes for 130 yards and a touchdown and leading three scoring drives.

The Pittsburgh Penguins beat the New York Rangers 4-2 to win their 17th consecutive game, setting an NHL record that still stands today. The Pittsburgh run, paced by NHL scoring leader Mario Lemieux, would end with a 6-6 tie against the New Jersey Devils (back when there were ties) in the final game of the season. 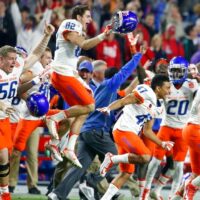 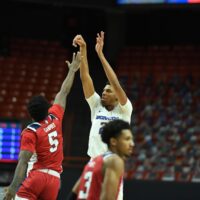