One of the most overused phrases in sports is the “chip on the shoulder.” But we know what it means. When the All-Mountain West preseason teams were released Tuesday morning, one Media Days attendee opined that the omission of Boise State players from the defensive squad would put a big ol’ chip on the Broncos’ shoulders. But when you look at the list, it’s not a major snub. There should have been a BSU linebacker included, but I’m thinking Ben Weaver and Tanner Vallejo canceled each other out in the voting. There was no lack of respect for Boise State in Las Vegas. Despite losing three conference games last year, the Broncos received 27 of 29 first-place votes to win the Mountain Division this season. Sometimes expectations weigh more than chips. But the losses weigh a ton.

Representatives of the three Mountain West teams that defeated Boise State last year, Utah State, New Mexico and Air Force, were peppered with questions about those victories (especially by the Boise media). USU players bemoaned the fact that their season went south after that resounding 52-26 win in October. “We got a little too high on ourselves,” said Aggies offensive lineman Austin Stephens. “To learn it that way was hard, but we can let that motivate us and build on what had happened to that point.” New Mexico stubbed its toe against Colorado State the week after stunning the Broncos at Albertsons Stadium. “After that Boise game, I wish I would have given my guys two days off instead of one, with the energy it took to win that game,” said Lobos coach Bob Davie.

A couple things stood out on the preseason depth chart Boise State unveiled Tuesday. Earning the third starting spot at wide receiver alongside Thomas Sperbeck and Chaz Anderson is Cedrick Wilson, the junior college transfer from Coffeyville Community College. At 6-3, and with an apparent penchant for converting third downs, Wilson is the polar opposite of small and shifty Shane Williams-Rhodes, the guy he essentially replaces. Coach Bryan Harsin said Wilson has earned the spot. “He’s a great preparer, a very good student,” said Harsin. Wilson will be wearing No. 1 this season, same as SWR last year. The Broncos don’t assign that jersey arbitrarily.

Also interesting was the initial makeup of the Boise State offensive line. At the all-important left tackle spot, there’s an “or” between Archie Lewis and Will Adams. They’ll be charged with replacing Seattle third-round draft pick Rees Odhiambo as Brett Rypien’s primary pocket protectors. Adams has done what he needed to do as a graduate transfer from Auburn. “He’s adapted as well as anyone who’s transferred in to Boise State,” said Harsin. Mario Yakoo remains on the right side at tackle—Harsin said he could still slide over to guard at times. Yakoo will be limited in fall camp. And the preseason winner at center, as expected, is Mason Hampton, the one-time walk-on out of Meridian High.

Not much roster movement at Boise State since the departures of Marquis Hendrix, Donzale Roddie and Darreon Jackson following the university’s sexual assault investigation. Harsin did say sophomore defensive end Kaleb Hill has decided to transfer and has left the program. And the status of safeties Dylan Sumner-Gardner and Chanceller James for the opener at Louisiana-Lafayette is not entirely determined. Sumner-Gardner, who was injured at Virginia and missed the final nine games of last season, was suspended from team activities at the Poinsettia Bowl. And James had a still-unexplained absence from the Blue & Orange Game in April. Harsin wouldn’t say whether either player is completely cleared, though they have been participating in player-run practices this summer.

One of my favorite revelations from MW Media Days came from Wyoming star running back Brian Hill, who has cut off his dreads. He said opponents were pulling him down by his dreads, and he was he was losing too much hair. Which makes you wonder why skill position players on offense would ever have hair flowing out of their helmets. But Hill rushed for a Wyoming record 1,455 yards and topped 200 yards four times with his dreads last year. And while talking about the strength of the Mountain West at running back, he gave props to another one with dreads who came before him a couple years ago. Watching Boise State’s Jay Ajayi in 2014 was a treat for Hill, who said, “Just to see him run, I thought, ‘man, that’s how an NFL running back looks.’”

Wyoming is the forgotten one, picked to finish last in the Mountain Division. The Cowboys are young—they were the only team at Media Days not represented by at least one senior. “Yes, it’s definitely symbolic,” said Wyoming sophomore defensive back Andrew Wingard of the Pokes’ youthful spokesmen. But the Cowboys have 17 starters returning, and they have the conference juggernauts on their schedule at home: Air Force, Boise State, Utah State and San Diego State. And this is the third year of a rebuild under coach Craig Bohl, who won three straight FCS national championships at North Dakota State. “Let’s play Boise close? No, let’s go out and beat ‘em this year,” said Wingate. “That’s coach Bohl’s mindset.” Is Wyoming this season’s New Mexico?

Troy Merritt’s victory last year in the Quicken Loans National gives him a second spot in the PGA Championship, beginning this morning at Baltusrol in New Jersey. Last year Merritt made the cut at the event and finished in a tie for 54th at Whistling Straits in Wisconsin. There’s another local tie in this year’s PGA Championship. Mitch Lowe, a 1985 graduate of Capital High, was one of the 20 club pros who qualified for the 2016 tournament. Lowe is now the head teaching pro at TPC Harding Park Golf Club in San Francisco, where the 2020 PGA Championship will be played. This is the fourth time Lowe has advanced to the championship—he also played the event in 2009’ 2010 and 2012.

The road has been a struggle for the Boise Hawks this season. The Hawks dropped to 5-13 away from Memorial Stadium last night with a 4-0 loss at Hillsboro. Hops pitchers Bo Takahashi and Palmer Betts combined for a three-hitter in the first shutout the Hawks have been handed all season. Boise scratched out just one hit after the third inning. The Hawks will try to salvage the final game of the three-game series in Hillsboro tonight.

Catching up on former Hawks in the majors, David Dahl made his debut Monday night for Colorado. Dahl’s ascent comes with an asterisk—he played six games for Boise last summer and went 3-for-24 while rusty on a rehab assignment. That wasn’t the real Dahl. He was rated the Rockies’ No. 2 prospect and was tearing it up at Triple-A Albuquerque before his call-up, hitting .484 with five home runs in 16 games. In his debut at Baltimore, Dahl went 1-for-4 and scored a run, and last night versus the Orioles he hit his first Major League home run. He’s the 120th former Hawk to reach the bigs—and the first out of Boise’s affiliation with Colorado.

I’ll have a KTVB.com Mountain West Factoid of the Day for the next two weeks. The first one deals with “the state of the program” at Boise State going into the 2016 season. The Broncos still have winningest program in the country in the new century (176-32), the highest winning percentage on their home field since 2000 (96-6 for 94.1 percent), the top winning percentage in conference games in the new century (111-13 for 89.5 percent), the highest-scoring average in the new century (40.13 points per game), and the second-longest streak of consecutive winning seasons with 18 (Virginia Tech leads with 22).

The Summer Olympics open in Los Angeles—without the Soviet Union and 14 other Soviet bloc nations. Those countries boycotted the Summer Games, partly in reprisal for the U.S. boycott of the 1980 Summer Olympics in Moscow. But the organizers of the L.A. Games, including C.E.O. Peter Ueberroth, were able to turn a rare and surprising profit of $200 million. Stars of those Olympics included sprinter Carl Lewis, who won four gold medals, and women’s gymnastics all-around gold medalist Mary Lou Retton.

NCAA Tournament in Boise, or not? 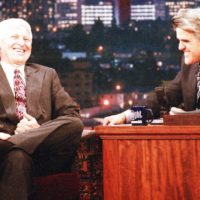