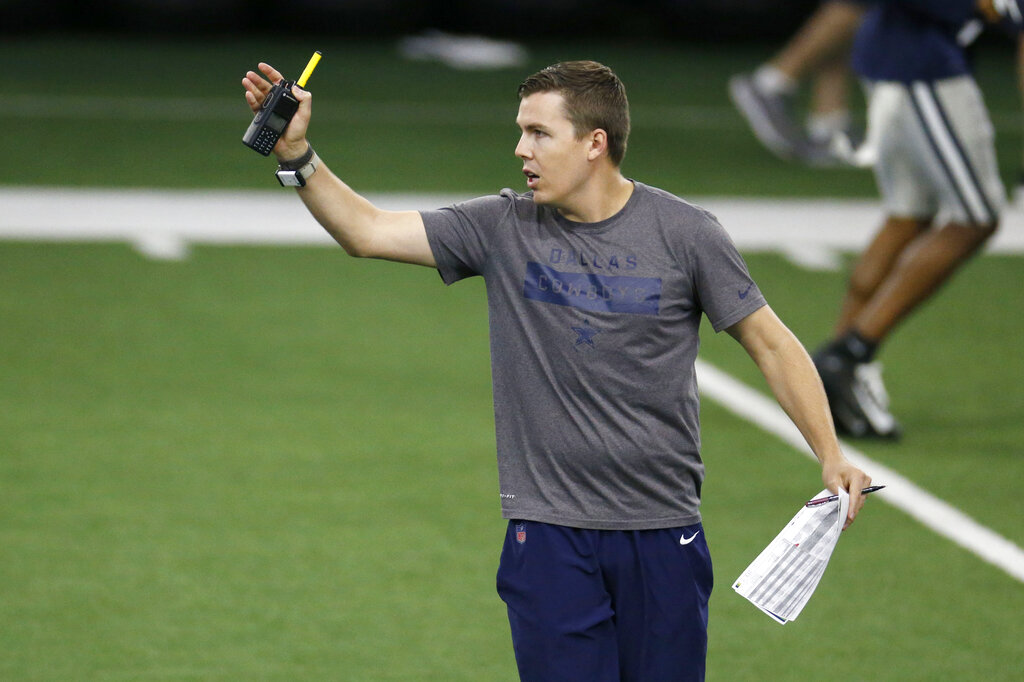 Troy Aikman is high on Kellen Moore. But Boise State probably isn’t high on Aikman and his view on what happened with Moore in the Broncos’ coaching search. And some are once again saying Aikman is wrong when he claims Moore accepted the Broncos’ coaching job. According to Aikman, “Then as they were working out some details, there was a bit of a disagreement and it was that Kellen backed out of the deal because he questioned the overall commitment of the university in supporting the football program and his opportunity to succeed.” Well, Moore withdrew from the Boise State job before Jeramiah Dickey was named the new athletic director. I doubt that Moore even had a chance to talk to Dickey. I could be wrong, but I think they would have been on the same page. Dickey pledges to find the money.

OUTSIDE THE BRONCO BOX

Andy Avalos is probably still be considered the favorite to land the Boise State job, but the dynamic has changed in the last 72 hours. Since Dickey was named AD on Sunday, names with no ties to the Broncos program like Graham Harrell and Brian Johnson, and even Tom Herman have surfaced. Harrell and Johnson are rumored to be on the interview list. And particularly in Johnson’s case, it has softened some of the hard edges in Bronco Nation’s Team Andy camp. Johnson, who quarterbacked Utah to its upset of Alabama in the Sugar Bowl 13 years ago, has been a fast-riser in the coaching world. He’s credited with the development of Florida quarterback Kyle Trask—and the Gators’ standing as the top-passing team in the country this season.

THE DECKS ARE BIGGER AT AUBURN

Another bleed-blue Bronco, Jeff Pitman, is headed to Auburn to become Bryan Harsin’s strength-and-conditioning coach. Pitman, who was on his second tour of duty at Boise State, was a former Broncos player and was a high school star at Melba. His first Boise State stint as a coach was under Dirk Koetter and Dan Hawkins. Pitman then followed Hawkins to Colorado and spent two seasons at Western Carolina before returning to the blue turf with Harsin. Pitman is the architect of Boise State’s infamous “running of the decks” at Albertsons Stadium, the grueling summer routine that epitomized the “conditioning” part of Pitman’s job title. He’s probably sizing up Jordan-Hare Stadium as we speak.

Dave Pilipovich was fired at the end of last season by Air Force. But the Falcons’ Princeton-style offense didn’t go with him. Air Force replaced Pilipovich with one of its successful head coaches from the past, Joe Scott, who actually installed that system at the academy. So the Falcons are just as difficult to play, as Boise State will find out tonight in ExtraMile Arena. After all, Scott graduated from Princeton. So how does a team like the up-tempo Broncos get ready for that? Well, coach Leon Rice doesn’t want his team to overthink the Falcons’ deliberate, back-cutting attack. “You’ve got to know how much to prepare for (Air Force’s offense) and how much to play with free minds,” said Rice after Game 2 against San Jose State last Saturday. What an interesting opponent for Devonaire Doutrive’s debut.

MORE THAN A ROLE PLAYER

The situation with 5½ minutes left against San Jose State last Saturday night was not for the faint of heart. The Spartans had drained all the momentum away from Boise State, and it was “upset alert” time. Then Max Rice came into the game and calmly drained an NBA three from the top of the key to break a 71-71 tie. It only reversed the momentum momentarily, but safe to say the Broncos wouldn’t have won without that shot. Rice is certainly more that the coach’s son. KTVB’s Jay Tust suggests that Rice “is going to make a strong push for Mountain West Sixth Man of the Year this season” and notes that his 88 points in nine games off the bench are the most in the conference by a wide margin.

LOVILLE IS THE LEADER

This leads in perfectly to the backdrop of tonight’s Boise State women’s game against Air Force. Jade Loville, who was huge off the bench last season, is now the centerpiece of the Broncos lineup—and she has been named Mountain West Player of the Week. In Game 1 versus San Jose State on New Year’s Eve, Loville poured in a career-high 31 points and converted a game-clinching three-point play at the end of Boise State’s 77-75 victory. She followed with 22 points in last Saturday’s 70-53 win over the Spartans. After averaging 8.0 points as a sophomore, Loville is currently scoring 20.6 points per game as a junior for the 5-0 Broncos.

Good news for college basketball in the Treasure Valley: Northwest Nazarene and College of Idaho have salvaged the 2020 Mayors Cup—in 2021. NNU and C of I have scheduled games in Nampa on January 26 and in Caldwell on February 6. The series dates back to 1933. In the meantime, the Yotes will be in Spokane tonight and Thursday night to face Whitworth. Tonight’s game will mark the first meeting between the two teams since the 1996 NAIA Division II national championship game—at NNU’s Montgomery Fieldhouse.

January 6, 2011, 10 years ago today: The longest game in Boise State basketball history results in a 102-101 Bronco victory at San Jose State in Leon Rice’s first season as coach. The contest went four overtimes after Boise State had blown a 15-point second half lead. The Broncos thought they had won it at the end of the third OT when senior guard La’Shard Anderson hit a three-pointer at the buzzer, but it was waved off after a video review. But they persevered when Anderson, who led all scorers with 31 points, made a steal with one second left in the fourth OT.