We keep riding the 2019 preseason magazine wave today with Street & Smith’s. Mark Anderson of the Las Vegas Review-Journal handles the Mountain West section this year. The theme is all the players lost by the top teams in the conference. Three of those schools have to replace quarterbacks. The one that doesn’t, Utah State with Jordan Love, has only one other offensive starter returning. “But Boise State brings in the top recruiting class among Group of Five programs, and it’s not difficult to imagine the Broncos taking their usual spot at the top,” writes Anderson. (Not usual enough, if you ask Boise State players.) Anyway, he likes Air Force as a dark horse in the Mountain Division, and “schools such as Hawaii or UNLV that have proven quarterbacks” in the West being “much tougher outs than expected.”

Some of the observations: Boise State has the best facilities, the top NFL prospect, STUD end/linebacker Curtis Weaver, and the top transfer, tight end Austin Griffin, the nation’s No. 1-rated junior college player at that spot. And here’s a good one. The “coordinator to watch” is Boise State OC Zak Hill. “The Broncos’ offense has been strong under his watch, but he will truly get attention if Boise State excels with a new quarterback and running back,” writes Anderson. That’s true. Hill came aboard in 2016, Brett Rypien’s sophomore year, so this is the first time he’s had to break in a new QB. Hill was a nominee last year for the Broyles Award, given annually to college football’s top assistant coach. He could really earn it this season.

Seniors Kekoa Nawahine and John Molchon will represent Boise State at Mountain West Media Days in Las Vegas next month. It’s usually a good bet that players chosen for that duty will be walking out as Broncos captains when the season begins. Nawahine, the safety out of Rocky Mountain High, wants to put a sub-par 2018 season behind him, and this is an indication he will. Turning the corner as a leader is a huge first step. Molchon, the left guard from Las Vegas, is sometimes overshadowed by O-line mate Ezra Cleveland and all the NFL talk surrounding him. But Molchon was also first-team All-Mountain West last year. And at 6-5, 322 pounds, who knows what the future might hold for him?

SUPPLY AND DEMAND IN VEGAS?

One more snippet on UNLV football today. The Rebels move into the Raiders’ new stadium next year, and according to the Las Vegas Review-Journal, the university has announced its premium seating price structure. All-inclusive VIP Club Seats will range from $2,000 to $2,500 per seat, pretty close to what club seats are for Boise State at Albertsons Stadium. Suites, which hold either 16 or 22 people, will cost between $22,000 to $40,000 per season. Suites in the Steuckle Sky Center are around the $50,000 level. On one hand, the UNLV pricing looks like a bargain, with the $1.8 billion jewel beckoning. But even with the new digs, Rebel football won’t have near the demand the Broncos’ product does. Basketball is king at UNLV, and even that is being buried by the new world of pro sports in Vegas.

SOME SEE BUYER’S REMORSE IN CHARLOTTE

San Diego State’s Jalen McDaniels has become one of the most controversial picks in last week’s NBA Draft. Not because people question his ability, but they wonder about his character. The Charlotte Hornets picked McDaniels in the second round—and, among others, Scott Fowler of the Charlotte Observer is not aboard. “The Hornets should have never waded into the McDaniels mess at all, instead staying far away from a player who has been sued by two former female high school classmates in Washington state, (accusing him of) secretly recording them without their consent while they were performing sexual acts,” writes Fowler. “Before you tell me McDaniels was 17 at the time and that everyone does stupid stuff as a teenager, let me ask you this: What if one of these young women had been your daughter?”

HOME IS WHERE THE WINS ARE

Isaac Collins drove in three of the Boise Hawks’ four runs and Frederis Parra turned in another stellar start as a five-game losing streak came to an end in a 4-0 win over Eugene Tuesday night. The key blow came in the bottom of the fourth inning when Collins looped a single into left-centerfield to plate two runs. Parra scattered four hits over seven scoreless innings while improving to 2-0. All four of the Hawks’ victories in the young season have came at Memorial Stadium. By the way, the Emeralds manager is Lance Rymel. Former Voice of the Hawks Mike Safford Jr. points out that Rymel played in 71 games as a catcher for Boise in 2012 and 2013.

WELL, HE DID PITCH HERE ONCE

This is one of those reaches that we always get a hard time about. But, the latest former Boise Hawk to make the majors is pitcher Adbert Adzolay with the Chicago Cubs. Adzolay was called up late in the 2014 season and made (drum roll) one appearance for the Hawks. It was about the same time Yankees star Gleyber Torres was here (Torres played in seven games in 2014). What’s cool is, Adzolay made his debut last Thursday against the New York Mets, threw four innings of relief, and—just like that—picked up his first major league victory. He allowed only one hit and one run and struck out five. Then Adzolay made his first big league start last night versus Atlanta. He yielded a home run on the first pitch of the game but didn’t allow another run or hit while going 4 2/3 innings. The Braves eventually won 3-2.

June 26, 2012: The BCS presidential oversight committee announces that after years of fan angst, a four-team FBS college football playoff will be instituted beginning with the 2014 season. The two seeded semifinals would be played as part of the existing bowl games, with the national championship game to be created separately. Six bowls would rotate hosting the semifinals, so there would be four major bowls every year outside the playoffs, with one spot guaranteed for a Group of Five school. Boise State would fill that slot in the first year—in the 2014 Fiesta Bowl against Arizona. 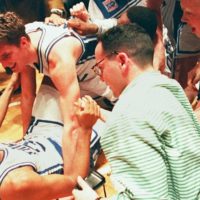