Whoever is in first place after the first week of conference play in Mountain West men’s basketball next season will stay there for almost four weeks. Guaranteed. That’s because the league schedule begins with two game isolated in early December. And that’s because the Mountain West Tournament had to be moved up a week in March due to the CONEXPO-CON/AGG International Construction Trade Show taking over Las Vegas March 10-14. Boise State opens MW play at New Mexico three weeks before Christmas, the earliest conference game in Bronco history. That will be followed by a home game in ExtraMile Arena against Colorado State on December 7. Conference action won’t resume until New Year’s Day.

The Pit in Albuquerque is dicey enough. But December 4? “I hate the fact that we start league that early—that’s hard,” said Boise State coach Leon Rice yesterday on Idaho SportsTalk. Rice pointed out that the Broncos won’t have Oregon transfer Abu Kigab available until the end of the first semester. Normally that would be in time for conference games, but not first these first two next season. Other nuggets from the Mountain West schedule: the teams Boise State skips next season are Fresno State (at home) and Colorado State (on the road). The Boise State women flip-flop on the locations the first week of December and on the skipped opponents. Boise State’s two byes come on January 22 and on February 29, the final day of the regular season.

ALL-IN ON THE NEW THREE-BALL

Rice also talked more about the new, deeper three-point line in NCAA men’s basketball. He remembered thinking, “Scoot up—get on the line, get on the line!” when Boise State’s Derrick Alston would take aim from 23 feet out last season. Now, the extra space can pay off for Alston. “He’s already been shooting a lot of these,” said Rice. Alston connected on 38 percent from beyond the arc last season. Justinian Jessup is built for the longer distance, too. “Alston is about 6-9, and Jessup’s 6-6,” added Rice. “They’re not just little guys trying to get it there.”

CORD’S REHAB ON A ROLL

Bryan Harsin’s update on Boise State quarterback Chase Cord on Idaho SportsTalk Wednesday has gained some traction. “He’s been doing some of the runs out there, so he looks good,” said the coach of Cord, who tore his ACL in practice last October. The goal was to get him back in time for fall camp, and Harsin said there’s no reason Cord shouldn’t be. He has a brace on his knee, and he’s not full-speed yet—but he has two months to go. Call it cautious optimism. “Before we cut him loose, we need him to be right,” Harsin said. True freshman Hank Bachmeier got massive amounts of hype going into spring football. But reality set in coming out. Bachmeier will have a learning curve, whie Cord has been in the Boise State program for two years and has meaningful game experience. And he played well.

As you know, the redshirt rule changed last year in college football, allowing qualifying players to appear in four games without losing a year of eligibility. Mike Wittman of Mountain West fan site MWCConnection.com has put together a good analysis on how it worked for key true freshmen in the conference. In the case of Boise State, all was well with wide receiver Khalil Shakir, even though he missed the final four games of the season. Writes Wittman: “He showed he belonged, gaining 240 yards between (receiving) and rushing to go along with two touchdowns, and is primed for a breakout year.” In Wittman’s eyes, running back Andrew Van Buren was on the other side of the coin. “He only got 34 touches, just under four touches a game,” Wittman writes. “Was it enough for a year of eligibility?”

ONE STEP CLOSER IN THE STEEPLE

Allie Ostrander breezed through her prelims heat in the 3,000-meter steeplechase Thursday night at the NCAA Outdoor Track and Field Championships in Austin, TX. The Boise State superstar advances to Saturday’s final, seeking to become only the 15th woman in NCAA history to have won the same event three years in a row at nationals. And just 90 minutes after the steeple, she’ll race in the 5,000-meters final. Ostrander still appeared fresh when she finished Thursday, turning around to congratulate exhausted fellow competitors and help some of them who struggled across the finish line in the oppressive heat. The Broncos’ Kristie Schoffield also advanced to the 800-meter final, while Alexis Fuller fell short in the 1,500. Fuller ends her Boise State career as a five-time All-American.

HEAD START ON THE HAWKS ROSTER

I can’t recall the Boise Hawks ever releasing their Opening Night roster this early, as a lot always happens between the MLB Draft and the Northwest League season, which doesn’t begin for another week. But the initial list is out. There are nine Hawks returnees at the outset, the most familiar and productive of which are infielders Daniel Jipping and LJ Hatch. Jipping hit .285 last season with 10 home runs and 33 runs batted in. Hatch collected 41 hits in the 42 games he played for Boise.

June 7, 2012: Boise State’s Kurt Felix wins the national title in the decathlon at the NCAA Outdoor Track and Field Championships in Des Moines, IA. Felix, already ticketed to the 2012 Summer Olympics in London to represent Grenada, won the competition by 106 points. He became the fourth Bronco ever to win an individual title at outdoor nationals, joining Jake Jacoby in the high jump in 1984, Eugene Greene in the triple jump in 1991, and Gabe Wallin in the javelin in 2004 and 2005. He has since been joined by Emma Bates in the 10,000-meters in 2014—and, of course, Allie Ostrander in the 3,000-meter steeplechase in 2017 and 2018. 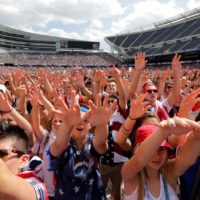 This Day In Sports: The ‘other’ football finally takes root