It’s happened elsewhere, and it could happen here. There’s a push to keep the NCAA Men’s Basketball Tournament out of ExtraMile Arena next March, when Boise is scheduled to host the event for the 10th time. Pat Forde of Sports Illustrated reported yesterday that three letters signed by a large coalition of student-athletes and advocacy groups were sent to the NCAA asking it to bar the state of Idaho from hosting NCAA-sponsored events while a law limiting female transgender and intersex sports participation is on the books. “Given Idaho’s adoption of a discriminatory law that directly impacts college athletics, violates NCAA values, and undermines the dignity and well-being of NCAA athletes, Idaho schools no longer qualify to host NCAA events,” the letters state. Will 2020 go from bad to worse?

Among those signng the letters were Boise State assistant women’s tennis coach Maria Lopez and track and field athlete Malia Pivec. Forde noted yesterday on Idaho SportsTalk that there is precedent in this situation. In 2016-17, the NCAA moved seven championship events out of North Carolina after the state passed the so-called “Bathroom Bill,” removing anti-discriminatory protections for lesbian, gay, bisexual and transgender people—most notably banning people from using public bathrooms that don’t correspond to their biological sex as listed on their birth certificates. Many of those who support the Idaho bill don’t give a hoot if Boise gets to host an NCAA Tournament. The transgender ban bill was sponsored by Rep. Barbara Ehardt of Idaho Falls and signed into law in March by Gov. Brad Little.

It was 10 years ago today that Mountain West Conference presidents voted unanimously to make Boise State its 10th member, effective July 1, 2011. It was a rollercoaster ride. Four days earlier, the league had put an invitation to Boise State on hold due to a rapidly changing college sports landscape. The MW was holding out hope it could land Colorado first, but the Buffaloes had announced a move to the Pac-10 the day before. The Boise State invite was the culmination of a seven-year effort by university president Bob Kustra to get the Broncos into the Mountain West. In that time, the Boise State football team posted four undefeated regular seasons and won six WAC championships and two Fiesta Bowls. It was a landmark day for a school that had been in Division I-A for only 14 years.

IT’S THE POSTSEASON THAT COUNTS, BUT…

Athlon Sports put Boise State at No. 23 in its preseason Top 25 three weeks ago. Now Athlon has released its preseason All-Mountain West picks (going four teams deep), and the Broncos have eight first-teamers, double that of any other school. Two of them are quarterback Hank Bachmeier and defensive tackle Scale Igiehon. The magazine is betting on the considerable upside of that duo. The other first-team selections are wide receiver Khalil Shakir, offensive tackle John Ojukwu, linebacker Riley Whimpey, cornerback Jalen Walker, nickel Kekaula Kaniho and return specialist Avery Williams. Athlon second-teamers from Boise State are Williams (as a cornerback), running back George Holani and STUD end-linebacker Demitri Washington.

MERRITT’S BEEN HEALTHY ALL THE WAY THROUGH

Former Boise State star Troy Merritt is in the field as regular play resumes on the PGA Tour today at the Charles Schwab Challenge in Fort Worth. When we last saw Merritt, he was coming off a top 25 finish in the Arnold Palmer Invitational at Bay Hill (he tied for 24th) and was even-par in the first round of The Players Championship on March 12. That’s when everything stopped cold in the sports world. “My game was rounding into shape,” Merritt told Caves & Prater last week on Idaho SportsTalk. “I didn’t really like being a ‘healthy scratch.”

Merritt said on IST he has “played quite a bit of golf in Idaho” the past three months. The course gets a little more difficult today at the storied Colonial Country Club. Merritt will be playing in front of an empty gallery. That isn’t a problem. “Guys like me who rarely see a spectator in a regular event, it’s easy to stay away from people,” quipped Merritt. He says this is the way to get the sport going again, though. “The PGA Tour, I think, has done a really good job,” Merritt said. “We’ve got to set a pretty good example (for the other sports).” World ranking points are going to be magnified now that the season is short. “I’m right on the bubble of getting into the PGA Championship,” said Merritt.

LIGHTS FOR THE YOTES

State-of-the-art lighting has been installed at College of Idaho’s Wolfe Field, the Coyotes’ baseball facility, and at Simplot Stadium. It came about thanks to a public-private partnership between C of I, the City of Caldwell and the Graye & Brenda Wolfe Family, longtime supporters of the school. The baseball lighting meets all requirements for hosting the NAIA Opening Round Tournament, along with all Idaho high school state tournaments and summer baseball events. There will be some night baseball games. Afternoon football games at Simplot Stadium are so wildly popular, C of I surely doesn’t want to mess with that. But the Yotes will be able to practice under the lights, and night soccer games are in play, too.

June 11, 2012: The Los Angeles Kings’ 45-year quest for a Stanley Cup ends with a 6-1 victory over the New Jersey Devils in Game 6 of the Finals. The Kings became the first eighth-seeded playoff team ever to win the NHL championship, dispatching the top three Western Conference seeds along the way and going 16-4 in the postseason. The Kings finally did what they never could do in eight seasons after bringing in hockey’s greatest player, Wayne Gretzky, in 1988.

What if there was a “Pacific Conference”? 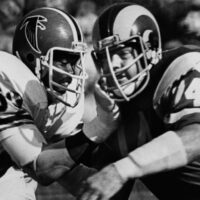 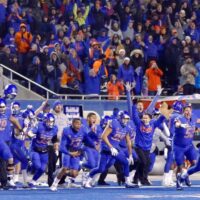 This Day In Sports: Mountain West championship No. 2