The first three games yesterday were good ones, but there were no upsets. The last one was a blowout—and it was a gigantic upset. Early in Buffalo’s game against Arizona, it was already clear that the Bulls were playing harder than any of the other seven teams playing in the NCAA Tournament’s Boise bracket. Crashing the boards, contesting loose balls, and locking down on the Wildcats’ 7-1 star, Deandre Ayton, Buffalo was leaving it all out in the floor. It paid off with a 40-38 lead at halftime. Arizona grabbed the lead 1½ minutes into the second half, but then the Bulls kicked it into another gear and roared away from the Wildcats, leading at one point by 25 and winning 89-68. That earns Buffalo a date with Kentucky tomorrow in the Round of 32 in Taco Bell Arena.

The best game of the day in terms of drama was the first one, with Gonzaga surviving UNC Greensboro 68-64. It was essentially a home game for the Zags—their fans were everywhere—and they looked in control when they led by 12 in the second half. But it was the Spartans who were up 64-62 with less than two minutes left before Zach Norvell Jr. drained a three-pointer with 20 seconds remaining to get the Bulldogs over the hump. Gonzaga is going to have to make some free throws if it’s going to go very deep into this tournament. It was misses from the charity stripe that helped UNC Greensboro get back in it, as the Zags were just 13-for-25 from the line.

Davidson was the team that many predicted would be in Buffalo’s spot with a possible takedown of Kentucky. But UK weathered the storm, thanks partly to the fact that Davidson didn’t have anyone like alumnus Stephen Curry drilling three-pointers. That would have changed the game. The North Carolina version of the Wildcats made 11 threes, but they attempted 33 of them, and a lot of the misses came at crunch time in a 78-73 loss. Amazingly, Kentucky won this game without even making a three-pointer, the first time UK has gone without one in nearly 30 years. The other first-rounder saw Ohio State stop South Dakota State and the “Dauminator,” Mike Daum, 81-73. Daum’s drives into the paint were often stifled by big bodies and long arms not seen in the Summit League, but he still scored 27 points.

Aside from Gonzaga, Arizona had the most out-of-town fan support of the eight teams that played in Taco Bell Arena yesterday. The Wildcats faithful were loud and confident in the first half, but their “U of A” chants lost a lot of steam down the stretch. Zags fans who were shut out of yesterday’s first session are no doubt making friends today with Arizona folks who are trying to dump their second round tickets. Boise fans were very into South Dakota State and Davidson, but nothing like the support they gave Buffalo during the Bulls’ incredible performance in the late game. We’re all suckers for underdogs. Heard in the stairwell while exiting the arena: “I think Kentucky should be worried Saturday.” That was met with a chorus of “yeahs” from a bunch of people who didn’t know each other.

San Diego State created a little drama in its first-round game in Wichita last night. The Aztecs had been playing catch-up with Houston all evening and trailed by 13 points early in the second half. But in the final minutes, they caught up. Cougars star Rob Gray, who poured in 39 points, scored with one second left to put Houston up by two. The Aztecs’ Trey Kell was able to get a 25-foot shot off at the buzzer, but it missed, and they lost 67-65. Nevada now tries to carry the Mountain West flag today in Nashville as a No. 7 seed against No. 10 Texas. The Wolf Pack have been missing point guard Lindsey Drew since he injured his Achilles at Boise State four weeks ago. How much will the Pack miss him this afternoon?

At halftime Wednesday night, Boise State’s season looked like it was ending on the sourest of notes. The Broncos trailed Washington by 15 points after going a stunning 5-for-28 from the field. But the way they played after halftime in the first-round NIT loss, when they had looked like toast, is something they can carry with them into the offseason. Boise State scored 53 points in the second half and would have taken the Huskies to overtime had Lexus Williams’ three-pointer not rimmed out at the horn. That half’s worth of effort, in fact, changes the tone for the Broncos. “They played hard until the buzzer sounded,” UW’s Jaylen Nowell said. “I heard one of their players say, ‘if we’re going to go down, we’re going to go down fighting.’ So that was very cool for him to say that and that shows how much leadership is on that team.”

Boise State thus ends the season 23-9. It’s the second time in the Leon Rice era the Broncos’ have kept their defeats to single digits. They featured the best player in school history, NBA-bound Chandler Hutchison, and they showed their moxie by out-rebounding opponents in 27 of 32 games (they were plus-9 at Washington). Boise State does have to live with the fact it lost five of its last eight games. “Finish” is a word ingrained in sports vernacular, and it’s something the Broncos were unable to do at some pivotal moments this season.

If you need any proof that an upset of top-seeded Louisville this morning by the 16th-seeded Boise State women in the NCAA Tournament, Rick Bozich of WDRB-TV in Louisville has these encouraging notes: “The average margin of victory in 16 vs. 1 games last season was 55.3 points. Of the last 76 women’s games matching 1 and 16 seeds, five have been decided by less than 20 points. Meanwhile, 31 have been won by 40 or more. The last 16 seed to defeat a one seed was Harvard, which toppled Stanford, 71-67 in 1998. Here is the asterisk—Stanford lost one starter to a knee injury in the team’s final regular-season game and then another during a practice leading into the tournament.” The Cardinals are facing no such issues today. But hey, that’s why they play the games. The Broncos have nothing to lose.

Paul Semons has toiled in the shadows the past three seasons for Boise State football. The 6-3, 278-pound senior defensive tackle from Eagle High has one career tackle—back in 2015 as a redshirt freshman in the 52-0 win over Idaho State. But maybe this year he becomes one of those classic Bronco walk-on stories with a strong spring and contributions in the fall, because he certainly had momentum going into spring ball this week. Coach Bryan Harsin tabbed Semons as the star of the weight room in the offseason. “Paul Semons had a heck of a winter conditioning (session),” said Harsin. Semons was an All-State D-tackle as a senior at Eagle.

A score similar to Wednesday night’s Boise State-Washington NIT game, but a much different flow. At Hec Edmundson Pavilion in Seattle, the Broncos fall to the Huskies 73-68 in the second round of the NIT. Boise State led by three at the half but ended up being called for a staggering 31 personal fouls in the game. Arnell Jones, Jeff Kelley and Greg Dodd all fouled out, hurting the Broncos down the stretch. Chris Childs led Boise State with 21 points as the season finished at 23-7—the best yet to that point. 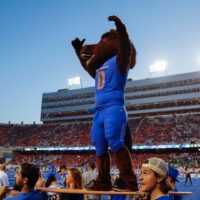 New era around the Blue 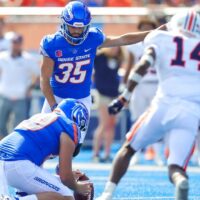 Beware Hawk when he carries that chip