Another magazine round as we wrap up this holiday week. One of the oldest such publications is Street & Smith’s, which profiles all 255 FBS and FCS teams. Street & Smith’s picks Boise State to win the Mountain West over San Diego State, but it has UCF Peach Bowl-bound as the top-ranked Group of 5 team. The Knights come in at No. 20, with the Broncos at No. 21. BSU has had—and still has—sustainability, though. Street & Smith’s points out: “Boise State continued its dominance on the recruiting trail in the 2018 cycle, signing the top-rated class in the Mountain West for the eighth consecutive year.” The top recruit? This is not breaking news. “Receiver Khalil Shakir is the headliner of the bunch and should fit in perfectly in the Broncos’ offense.”

Street & Smith’s, like a few other publications, picks San Diego State over Fresno State in the West Division. The reason seems to be a combination of the Bulldogs having to replace their entire defensive line—and their inability to sneak up on people a year after becoming only the second team in history to go from double-digit losses to double-digit victories. Street & Smith’s still sees the West as the weaker division and goes with the Broncos as the conference’s survivor this year: “Boise State figures to be tested in the deeper Mountain Division from the likes of Colorado State, Utah State and Wyoming, but this is an experienced team used to winning big games.”

So what will 2018 bring for Idaho as the Vandals return to the Big Sky? Street & Smith’s picks them to finish eighth in the conference (in contrast to Lindy’s, which has Idaho No. 3 in the Big Sky and No. 12 in the country). Says Street & Smith’s: “It’s hard to figure how Idaho will fit in as it plays in the Big Sky for the first time in more than two decades. The Vandals won three games in 22 seasons at the FBS level, but decided to return to their roots after seven seasons in the far-flung Sun Belt Conference. Coach Paul Petrino lost his top skill players on offense but has a good nucleus on defense.” One of the departed guys on offense is quarterback Matt Linehan—there’s no clear-cut heir-apparent right now. Incidentally, Street & Smith’s predicts Weber State as the Big Sky champion.

Former Boise State stars Chandler Hutchison and James Webb III are set for the NBA Summer League in Las Vegas, with play beginning today. Webb, who made his NBA debut this past season with Brooklyn, opens with the Nets against the Orlando Magic this afternoon. Hutchison, as the 22nd overall pick in the NBA Draft two weeks ago, will have the attention of the Chicago Bulls—and their fans—as he gets into action versus the Cleveland Cavaliers tomorrow night on ESPN2. One of Hutchison’s teammates in Vegas will be Donte Ingram out of Loyola Chicago, the Cinderella Final Four qualifier in this year’s NCAA Tournament. Ah to be a fly on the wall and hear Ingram talk to Hutchison about what happened when his Ramblers came into Taco Bell Arena last November and lost 87-53 to the Broncos.

The Boise Hawks have their second four-game winning streak of the season after an 8-5 win over Eugene last night. It was Daniel Jipping who gave the Hawks some separation with a two-run homer during a four-run fifth inning. One of the sidebars of the season so far is the fact the Hawks reported sellouts for every game at Memorial Stadium through the 4th of July. The run ended last night, but it seems like Hawks baseball is a summer staple again. Minor league teams are famous for padding numbers with season ticket totals, but Boise general manager Bob Flannery was on Idaho SportsTalk yesterday noting that these days, those season ticket seats are being used. The Hawks are averaging 3,801 fans per game.

Boise State already has a replacement for women’s softball coach Cindy Ball, who left last week for the top job at UCF. It’s Maggie Livreri, who has been with Utah the past seven seasons—the last two as associate head coach. Livreri helped the Utes to three straight NCAA Tournaments from 2015-17, including back-to-back Super Regional appearances. She knows the Mountain West, too, having played and coach at UNLV before her stint with the Utes. Livreri will begin her head coaching career with a solid nucleus from a team that won the Mountain West this season and has added former Eagle High star Bradie Fillmore as a transfer from Cal.

The 2018 Kelly Cup Playoffs weren’t kind to Idaho Steelheads goaltender Tomas Sholl, who went 0-2 in the postseason this spring. But the Steelheads are banking on Sholl’s amazing finish to the regular season as they have signed him for the upcoming season. Sholl joined the Steelheads at the end of February, and he appeared in 11 games with Idaho through the end of the regular season, going 9-0-1 with four shutouts. In March, Sholl became the first goalie in Steelies history to win consecutive ECHL Goaltender of the Week awards, and he put a wrap on it by being named ECHL Goaltender of the Month. Through 19 regular-season ECHL appearances with the Steelheads and Adirondack Thunder, Sholl has not suffered a regulation loss.

What a whirlwind the past month for Vallivue High grad Gabby Barker. She got married and is now Gabby Lemieux, and she completed her four-year career at Texas Tech and has turned pro. This week Lemieux is playing her first LPGA Tour event, the Thornberry Creek LPGA Classic in Oneida, WI. She struggled to a five-over 77 in the first round yesterday, but this is all for the experience. After this, Lemieux is headed for the Symetra Tour, where she plans to play 11 tournaments. She got into this week’s event through a sponsor’s exemption. The Thornberry Creek Classic is sponsored by the Oneida Nation, and Lemieux is a Native American from the Shoshone-Paiute tribe. Bishop Kelly alum Maddie Sheils is also in the field—she shot an even-par 72 yesterday.

Called the “Game Of The Century” and held in conjunction with the Chicago World’s Fair, baseball’s first All-Star game is played at Comiskey Park. Babe Ruth rose to the occasion, smacking a two-run homer in the third to lead the American League All-Stars to a 4-2 win over the National League. The Sultan of Swat’s Yankees teammate, Lefty Gomez, got the win before more than 49,000 fans. 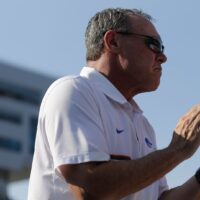