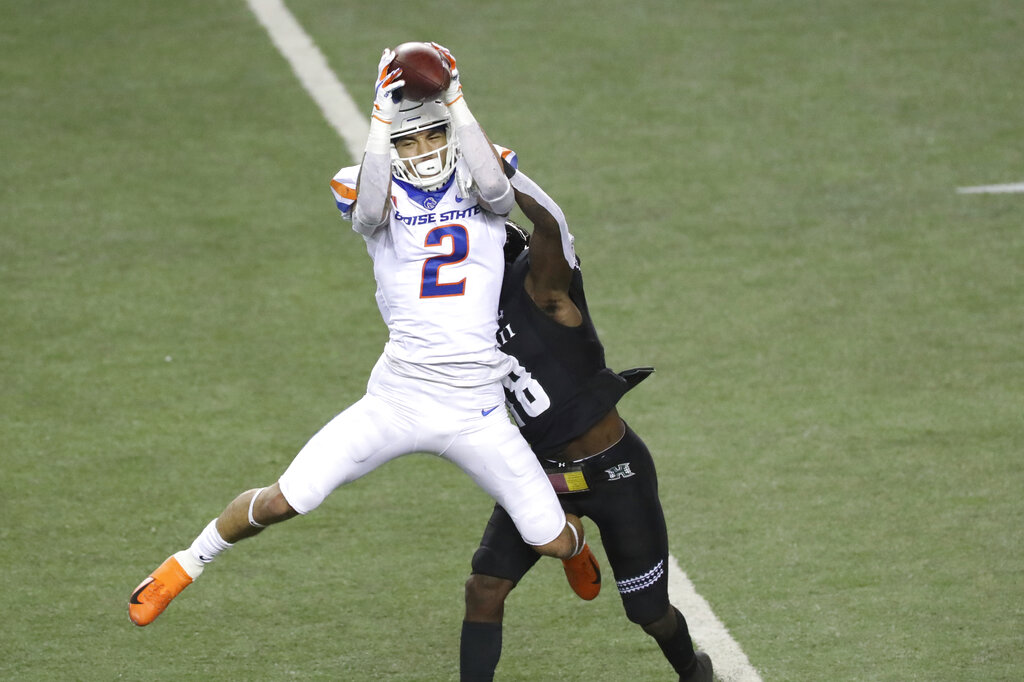 Coach Andy Avalos said Sunday that both of his quarterbacks, Hank Bachmeier and Jack Sears, are operating the new Boise State offense at a high level. Avalos even added that true freshman Taylen Green “is now able to operate and run the majority of the playbook.” So what’s it going to be like? When asked at Mountain West Media Days how much of offensive coordinator Tim Plough’s new scheme the Broncos showed in the Spring Game, Khalil Shakir just laughed. He thinks fans will be impressed with the real thing. “They’ll see a completely new offense,” said Shakir. It’s an offense I’ve never run before. It’s amazing. It’s very fast.” It was more plodding last year. Not to bring up Kellen Moore, but Kellen Moore’s Broncos would surprise teams with a no-huddle attack mixed in with the shifts and motions. It’s all on the table.

SHAK AT THE HEAD OF THE PACK

Boise State special teams coach Stacy Collins revealed Monday that Shakir is at least penciled in as starting punt returner. “Right now he makes great decisions when the ball’s in the air, plus there’s the maturity factor,” said Collins. As prevalent as Avery Williams was on punt returns the past four years, he was occasionally spelled by Shakir, who has 15 career runbacks. They’ve covered only 65 yards, though (4.3 yards per return), so the Broncos will be look for more Avery-esque numbers from Shakir this year. CT Thomas and Stefan Cobbs are waiting in the wings, according to Collins.

TEAM SPOKESMAN FOR A DAY

Defensive end Shane Irwin, who was pressed into starting duty last fall for Boise State and responded with a banner season, created some social media buzz Monday after Zooming with the media. Irwin said Oregon transfer running back Cyrus Habibi-Likio told him, “You guys have a Pac-12 defensive line, first and second string.” Irwin liked that. He’s one of them. Then there was this about his offensive counterparts: “The O-line is frickin’ stout all around…they’re getting better every day…it’s exciting.” And if the platitudes poured on Ben Dooley by Irwin are accurate, Dooley will be starting at right tackle at UCF two weeks from Thursday.

The Preseason AP Poll released Monday didn’t contain many surprises. Just like in the Coaches Poll last week, Boise State is ninth in line to get into the Top 25.Nevada is, too—both teams received seven points in the Others Receiving Votes category. Oklahoma State was No. 22 in the Coaches Poll but is first in line to get onto the AP list. UCF is actually two points behind the Broncos. The same three Group of 5 teams made the AP Top 25 as made the Coaches Poll and, therefore, lead the New Year’s Six race out of the gate: Cincinnati at No. 8, Coastal Carolina at No. 22 and Louisiana-Lafayette at No. 23.

ALL EYES ON CARSON STRONG

“Carson Strong and other QBs who could be the next surprise of the NFL draft,” reads a headline on an Adam Rittenberg story at ESPN.com. There are two pieces to this. First, how good the Nevada star is, and can be. “You think of where the Zach Wilsons have come from, the Trey Lances have come from, Josh Allens, Jordan Loves, those kids have all come from a similar background as Carson,” Wolf Pack coach Jay Norvell told ESPN. “So, is it possible for Carson to be a guy like that? Absolutely. But it’s obviously up to him.”

On the other hand, Chris Murray at Nevada Sports Net Talks about something that’s not up to Strong: his health. Murray points out that Strong has had three surgeries on his right knee, including two in the last few months. Irritation in that knee led to him being pulled midway through last Monday’s practice. Strong apparently hasn’t practiced since. Nevada isn’t raising red flags yet, but this quote from Norvell is: “We have a long season. Even this first game is not the only important game we’ll play. The most important thing is we get him back for the bulk of the season.” Sounds like they’re preparing for Strong to be out when the season begins at Cal on Labor Day weekend. Nevada, by the way, is moving fall camp to Stanford to get away from the hazardous air quality in Reno.

FROM THE ‘UH, NO’ DEPARTMENT

I saw this in a Dennis Dodd column at CBSSports.com about a possible alliance between the PAC-12, Big Ten and ACC: “Who absorbs who doesn’t really matter at this point. We’re almost assured of dropping from 10 to nine FBS conferences. Ten years ago, realignment offered a step up for the likes TCU (Big 12) and Utah (Pac-12). This time, it threatens to thin the herd with the likes of Oklahoma State, Kansas State and Baylor no longer being major-conference members. Kansas could wind up playing basketball in the Mountain West.” Uh, no. (That was obviously tongue-in-cheek.) A lot of crazy things are bound to happen the next few years, but that isn’t one of them.

The field as of Monday for the Albertsons Boise Open this week does not include any of golf’s big names, but it does feature veterans like four-time PGA Tour winner Camilo Villegas and two-time winner D.J. Trahan. Also teeing off Thursday will be Sam Saunders, the grandson of Arnold Palmer who made his pro debut at the 2009 Boise Open. Saunders earned a sponsor’s exemption for that tournament, but it wasn’t due to family ties. He had starred the previous three seasons at Clemson (although he has yet to break through on the PGA Tour). Saunders opened play that week in a group with another big-time amateur making his pro debut, Rickie Fowler. This will be the sixth time Saunders has played the Boise stop.

August 17, 1941: The birthday of a big league player best known for his nickname—and that’s unfortunate, because he was a really good player. Boog Powell was part of the Baltimore Orioles dynasty that won four American League pennants and two World Series championships between 1966 and 1971. Powell was the AL Most Valuable Player in 1970. Powell got his nickname from his father, who shortened it from “Bugger.” Boog Powell, 80 years old today.