When you hear a 6-2, 260-pound outside linebacker/defensive end has committed to Boise State, what’s your first thought? Raise your hand if you said, 1) Hmmm…Curtis Weaver is probably departing for the NFL, and 2) could this be the next Curtis Weaver? Herbert Gum of Diboll, TX, gave his verbal on Thursday. Calling him another Weaver already might be a reach, but he did pick the Broncos over LSU, Missouri, Arizona and Kansas State, among others. Speaking of Weaver, he’s added first-team FBS All-America honors from Walter Camp, a first in Boise State history. Weaver also picked up second-team nods from USA Today and The Athletic, while Boise State running back George Holani is on The Athletic’s Freshman All-America second-team.

THE PARTY LINE ON BRONCOS-HUSKIES

Let’s delve into bowl handicapping today, via Adam Rittenberg’s prediction for all 41 bowl games at ESPN.com. Here’s Rittenberg’s crystal ball for the Las Vegas Bowl: “Chris Petersen’s final game as Huskies coach comes against the program he built into a national sensation. At least one team uses the Statue of Liberty play in a game that includes so many Boise State coaching connections on the Washington staff—Petersen, new head coach Jimmy Lake, offensive coordinator Bush Hamdan (and more). Boise State has been the better team, but expect Washington to play hard for both Petersen and Lake. The Huskies’ defense is the difference in a close one. Prediction: Washington 24, Boise State 21.” That’s interesting. How hard will UW play?

Ryan Dinwiddie has been in Canada for a long time. He was a quarterback in the CFL; then he started his coaching career there. Thursday he was named head coach of the Toronto Argonauts. Dinwiddie was one of the most competitive gamers Boise State has ever seen. What I remember most about Dinwiddie statistically is that he threw for 31 touchdowns in his senior year—and he was robbed of countless more. There were so many times that he’d connect for a big gainer only to see his receiver tackled at about the one-yard line. Then the Broncos would run it in for the TD. Best example: a 45-3 win at SMU, when—from the Boise State one-yard line—Dinwiddie hit Lawrence Bady over the middle, and he ran it 98 yards to the Mustangs one. And yes, the Broncos ran it in.

Dallas hosts the L.A. Rams Sunday as everybody tries to figure out what the heck is going on with the Cowboys. Bob Sturm of The Athletic takes a look at the paradoxical Dallas offense. Despite a 6-7 record, Sturm writes, “We find the Cowboys at No. 1 in the NFL with 431 yards per game. We find them No. 1 in passing offense with 307 yards per game. We find them as the No. 1 third-down offense in the NFL despite just watching them play a game where they appeared awful in this regard. This offense is No. 4 in the entire NFL in explosive plays—I promise. They have more 20+ yard plays than nearly any team in the NFL.” Alas, Dallas cannot score points anymore.

You know what’s next. “As I am always asked, is this on Kellen Moore?” Sturm adds. “I think it is dangerous to only give him credit for the good but none of the blame for the bad. On the other hand, we know that head coaches tell their coordinators what they want and don’t want to see. I would prefer to see Kellen Moore in an environment without Garrett to know for sure, but that will not likely happen in Dallas.” Certainly, things aren’t going well for the former Boise State great right now. But amidst Dak Prescott’s slump and general team dysfunction, do we have a clear idea of his abilities?

Boise State-related NFL notes going into Week 15: former Broncos defensive back Jamar Taylor, recently released by the Seahawks, has signed with Atlanta and has been added to the Falcons’ 53-man roster. Taylor will be in uniform Sunday against the 49ers in Santa Clara. Jeremy McNichols, who has bounced around on practice squads the past three seasons, has been released from the Chicago PS. The uncertainty continues for Leighton Vander Esch, who is doubtful (you can count him out) for the Cowboys on Sunday, and Dallas has placed Cedrick Wilson on injured reserve following the knee injury he suffered toward the end of last week’s game at Chicago. Wilson had five catches for 45 yards this season.

The Boise State men are cautiously optimistic that Saturday afternoon’s game against Alabama State will be a confidence-builder, if nothing else. The Hornets from the SWAC are 1-8 on the season and are coming off a 55-point loss to Kansas State Wednesday night. There are some Broncos whose confidence was tested in Wednesday’s 69-56 loss at Tulsa. Derrick Alston, Justinian Jessup and Alex Hobbs combined to go 7-for-27 against the Golden Hurricane. Boise State, now 5-4, is hoping for friendlier rims and friendlier backdrops in ExtraMile Arena. Reminder: this is the last game the Broncos will play without Oregon transfer Abu Kigab. The Boise State women, coming off a solid win over BYU, play at Eastern Washington Sunday afternoon.

NOW HUTCH IS HEALING A SHOULDER

Former Boise State star Chandler Hutchison is on the shelf again. The second-year Chicago Bull injured a shoulder two weeks ago in a loss to the Warriors, and he remains doubtful through this weekend. Hutchison, the 22nd overall pick in the 2018 NBA Draft, missed half of his rookie season with an injured toe, then was limited at the start of this season with a hamstring issue. “There’s nothing that will be lingering long-term,” he told the Chicago Sun-Times, stressing that he’s staying engaged. “Just stay locked in like I was playing in the game. It’s not terribly hard.” And here’s a hard-to-find pro hoops nugget: former College of Idaho standout Roosevelt Adams was the no. 1 overall pick in the Philippine Basketball Association rookie draft. Adams was an All-Cascade Conference pick in 2017-18.

It’s still only December, but it’s not too early for the Idaho Steelheads to make a push upward in the standings. The Steelheads started the season 5-0-1 in October, but now they’re 12-9-5 and in third pace in the ECHL Mountain Division. The Steelies have 29 points in the standings, eight behind the division-leading Allen Americans. They wrap up their first-ever series versus Fort Wayne tonight and tomorrow night in CenturyLink Arena. The Komets are 15-7-2.

December 13, 2014, five years ago today: In a landslide, Oregon’s Marcus Mariota becomes only the second player from a Northwest university—and the first Hawaiian-born athlete—ever to win the Heisman Trophy. Mariota threw for 4,454 yards and 42 touchdowns against only four interceptions, and he rushed for an additional 770 yards and 15 TDs. He led the Ducks to a 13-1 record and a 59-20 rout of Florida State in the Rose Bowl, a game in which he was named MVP. As sometimes happens with Heisman winners, Mariota hasn’t been able to replicate his college success during his NFL career.

The free agents of college basketball

Jerry Kramer: “You can, if you will” 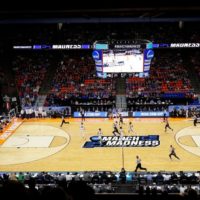