In the hype leading up to a bowl game a lot is made of how important that result is going into the offseason. A win adds juice to winter conditioning, while a loss has a lingering effect. Boise State posted one of the most dominant victories in the history of bowl games last December when it drilled Northern Illinois 55-7 in the Poinsettia Bowl and outgained the Huskies by a staggering 621 yards. Then the carryover effect is forgotten as the months go by. Coach Bryan Harsin says that’s a good thing as fall camp begins today for the Broncos. “At this point it doesn’t (affect us),” said Harsin. “Our team has changed so much since then. If we lean back on that game we’re in big trouble.” The only remnants that matter, Harsin said, are the new things they tried in that game that worked and will help them moving forward.

Tanner Vallejo met the media yesterday for the first time since before the Poinsettia Bowl, for which he was suspended from the team. The standout linebacker and 2014 Fiesta Bowl Defensive MVP has the look of a leader as a senior after a step back as a junior. “I grew up a lot the past half a year,” said Vallejo yesterday. “It’s probably the toughest offseason I’ve ever been through here. I really took it upon myself to be a better teammate.” Vallejo also likes the tweaks in the Boise State defense this year, as he moves to a newly-defined SAM linebacker position. That’ll allow him to do everything he enjoys. “I like to play in space—I like to play inside,” Vallejo said. “It’s definitely fun to match up against wide receivers and see how you are.”

Quarterback Brett Rypien’s new role as Boise State team leader was on display yesterday. The guy is cool, calm and collected. At Mountain West Media Days, Harsin talked about Rypien’s abrupt debut in the third game of the season last September. “Even though we microwaved him to get him out there, we’d have liked to marinated him a little bit,” said Harsin. Said Rypien yesterday, “Marinated—that’s kind of a funny word. I feel very comfortable with the offense now. Last year I didn’t have a complete command of the offense and how coach Harsin wanted to operate it.” And through all that, Rypien threw for 3,353 yards and 20 touchdowns in 11½ games. To think there could be some growth this season…

Boise State’s 30-Year All-Blue team occupied a lot of the summer on the airwaves (and online in this column). Now, the voting by fans has been revealed—and in a nutshell, the biggest upset was in the secondary where D. Ross, an All-Big West pick in 2000, got one of the spots over the likes of Gerald Alexander, Gabe Franklin, Quintin Mikell, Jeron Johnson, Orlando Scandrick, Jamar Taylor and Darian Thompson. Don’t get that one. Also, nice to see that the Division I-AA standouts did not get short-changed in a crowded defensive line field, as Erik Helgeson and Pete Kwiatkowski earned spots on the squad.

The Sun Belt announced yesterday that Boise State’s game at Louisiana-Lafayette will indeed kick off at 10 a.m. Mountain time on September 3. The contest from Cajun Field will air on the American Sports Network and ESPN3. The release says “affiliates for the American Sports Network broadcast will be announced at a later date.” The patchwork ASN is owned by Sinclair, which also owns KBOI-TV. So Channel 2 presumably has first dibs to air the game in the Boise market.

Kellen Moore had surgery scheduled on his broken fibula yesterday and is said to be out 3-4 months now, essentially ending his 2016 season with the Dallas Cowboys before it began. There isn’t a provision that would allow the former Boise State great to come off injured reserve between the season’s mid-point and the end of the campaign. Dallas appears to be leaving the door open for Kellen next year. After quickly dismissing the notion that the Cowboys would be interested in Nick Foles last Friday, owner Jerry Jones tried to go back to Foles with hat in hand, but the former Arizona Wildcat has agreed to terms with Kansas City.

FBS teams can count only one game each year against FCS schools toward bowl-eligibility, and Wyoming already has a home game set versus FCS Wofford in 2018. So that has evidently forced the Cowboys to nix their trip to Moscow that season in light of Idaho’s move back to the FCS. Vandals athletic director Rob Spear told the Casper Star-Tribune that the scheduled 2019 game between Wyoming and Idaho in Laramie will “probably” still take place. Idaho also opensfall camp today.

Not that Nampa’s Tyler Aldridge wouldn’t want to play in the Albertsons Boise Open in September, but his goal is to skip it this year. Aldridge can secure his PGA Tour card for the 2016-17 season if he finishes in the top 125 of the FedExCup standings. Otherwise he’ll be battling for a card in the Web.com Tour Finals. Aldridge is currently No. 131 going into the Travelers Championship today in Cromwell, CT. There are three PGA Tour events left in the regular season. Troy Merritt is also in the field at the Travelers, while Graham DeLaet is gearing up for the Summer Olympics as he represents Canada in Rio.

Boise’s Kristin Armstrong was on a list of 17 athletes in a poll at NBCSports.com regarding who should be the U.S.A. flag-bearer during the Opening Ceremonies at the Summer Olympics in Rio tomorrow night. Yesterday Michael Phelps was chosen for the honor. It makes sense for the most decorated Olympian of all-time (see “This Day In Sports” below). And maybe it’s just as well for Armstrong, who KTVB reports has been subject to social media vitriol from, among others, the cycling community.

Boise natives in the big leagues have been extremely rare, but now there have been three this decade. Last night, James Hoyt joined Stephen Fife and Josh Osich when he made his debut for the Houston Astros. Hoyt took the mound in the seventh inning during the Astros’ 3-1 loss to Toronto and struck out two while walking one. The Boise High grad did not allow a hit nor a run. Hoyt took a quirky route to the majors, playing in three independent leagues and the Mexican League before getting a shot in the Houston organization. His rise has been rapid since. Hoyt was leading the Pacific Coast League in saves with 28 and had an ERA of 1.62 when he was summoned from the Fresno Grizzlies.

KTVB.com Factoid of the Day: When Fresno State joined the conference in 2012, the expectation was that the Bulldogs would help raise the bar in MW football. And the first two years in the league, they did, sharing the championship with Boise State and San Diego State in 2012 and winning it outright in 2013. But the past two seasons, Fresno State has gone 6-8 and 3-9. Last year the Bulldogs posted their their fewest wins since a 3-8 season in 1978 and their lowest winning percentage since a 2-9 campaign in 1973. They did not have any first-team postseason all-conference selections in 2015, the first time that’s happened since 1951. Fresno State was the program Boise State looked up to when it joined the WAC in 2001. The Mountain West needs the Bulldogs to resuscitate.

American swimmer Michael Phelps competes in what we thought would be his final race and temporarily retires as the biggest Olympic medal-winner of all-time. The 27-year-old Phelps swam the butterfly leg of the men’s 4X100 medley relay at the Summer Games in London, winning the 18th gold medal of his career and 22nd medal overall. Phelps’ hardware haul began in Athens in 2004 and continued in Beijing in 2008, when he broke Mark Spitz’s record of seven golds in a single Olympics (he won eight). Now he gives it one more go in Rio. 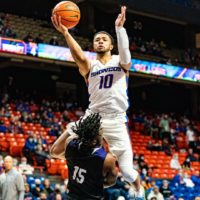