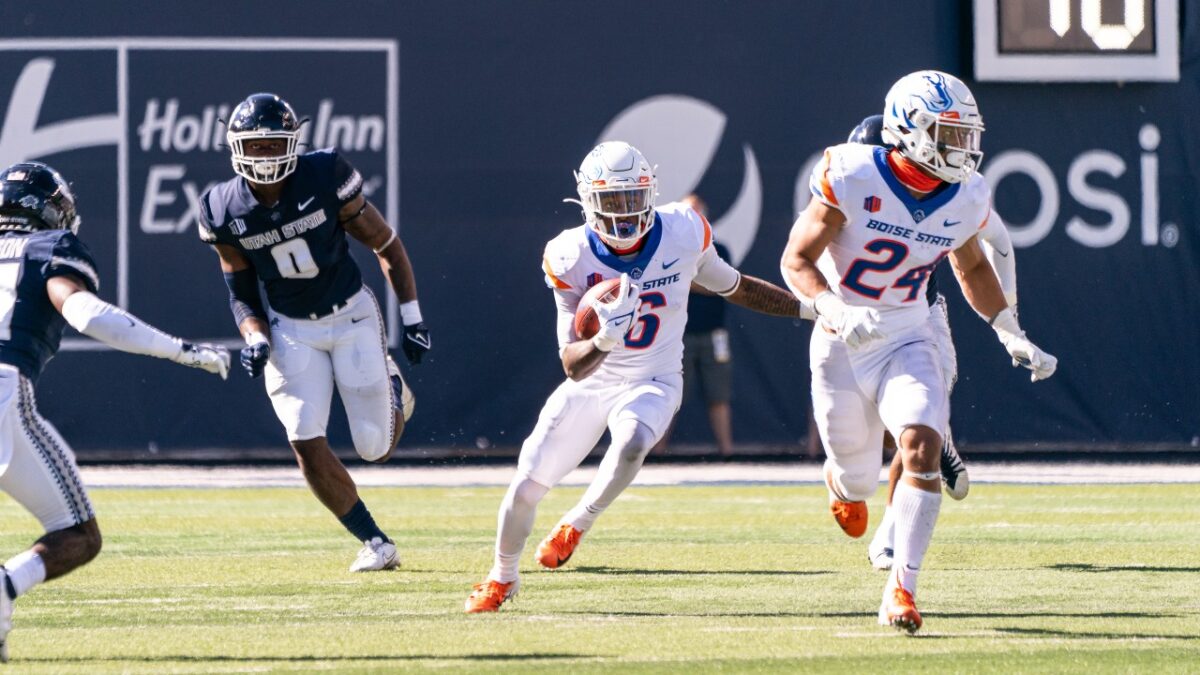 Before the season started, the strength of the Boise State offense, by consensus, was the wide receivers group. And that thought has held through the first four games of the season. Well, the Broncos will meet their match Saturday afternoon against Nevada. They not only want to protect the Blue, they want to protect their room, because Boise State has Athlon’s No. 2 receivers/tight ends group in the Mountain West—and Nevada has the No. 1 unit. You’ll see both of the Preseason All-Mountain West wide receivers in Saturday’s game, the Broncos’ Khalil Shakir and Nevada’s Romeo Doubs. They are fourth and fifth, respectively, in catches per game in the league. While the Wolf Pack will be without Elijah Cooks, out for the season with a foot injury, Boise State may get Stefan Cobbs back three weeks after his injury versus UTEP.

It’s not just what the Boise State wideouts do through the air, as evidenced by the Utah State game. Shakir, CT Thomas and Octavius Evans combined for 10 carries and 42 yards on the ground last week. We’ll see if that trend continues versus Nevada, especially if Cobbs is back in the lineup. It’s important to see Thomas become part of the Broncos’ attack again. He came into Logan with just two catches, but he had three grabs for 35 yards and three rushes for 25 yards against the Aggies. Thomas and Evans joined the program together in 2017, and Evans has had a hard-luck road. This year, however, he is Boise State’s second-leading receiver with 12 catches for 137 yards. Additionally, Davis Koetter has emerged as a reliable threat. Koetter is also the only non-quarterback to attempt a pass.

You might notice that the Athlon unit rankings lump the wide receivers and tight ends together. That’s where Cole Turner comes in. Nevada’s 6-6 senior tight end is a force, with 14 catches for 135 yards and a touchdown in three games. With that, here’s a September recap of Boise State’s tight ends. They have indeed been targeted in the Broncos’ four games, but they have only nine receptions combined (10 if you include Scott Matlock’s “fat guy touchdown” last week). Riley Smith, who had 15 grabs for 155 yards and a TD in the abbreviated 2020 season, has five for 50 this year. Tyneil Hopper and Kurt Rafdal have two catches apiece, including Hopper’s first touchdown, and that’s it. The old offense didn’t feature John Bates much last year, and the new offense hasn’t featured Smith much this season.

ANOTHER HAPPENIN’ DAY IN THE STANDS

Regardless of how you feel about COVID-19 protocols at Albertsons Stadium, you know there’s going to be an electric environment surrounding the blue turf for the Nevada game Saturday. And that will always be important at Boise State. When Oklahoma State visited 12 days ago, Boise State didn’t send the Big 12 a message on the scoreboard, but it did in atmosphere. As often happens, the crowd of 36,000-plus sounded like 60,000 as the Broncos and Cowboys battled. That won’t change this week, as this game sets up perfectly. The Mountain West’s two preseason favorites face off in a rivalry that comes back to life, with a beautiful 75-degree afternoon in store.

ON THE HORIZON IN PROVO

Next week, Boise State will face a crowd of 65,000 that’ll sound like, oh, 80,000. BYU announced Wednesday that its game against the Broncos at Lavell Edwards Stadium is sold out. Speaking of electric. Before that, the Cougars go up to Logan Friday night to tangle with Utah State. We’ll see what kind of measuring stick that is after Boise State beat the Aggies 27-3 last Saturday. By all rights, BYU should dominate that game as the No. 13 team in the country. The Cougars did meet some resistance from South Florida in its 35-27 victory in Provo last week, though. The Bulls are now 1-3.

HUNGRY VS. HUNGRY IN FLAGSTAFF

Idaho State is still looking for its first win three games into the season, and Flagstaff wouldn’t seem to be the place to get it Saturday against a Northern Arizona team that toppled in-state big boy Arizona 21-19 two weeks back. But the Lumberjacks fell flat at Northern Colorado last Saturday in a 17-10 loss and are now 1-3. The Bengals, meanwhile, had a 21-14 halftime lead over Sacramento State in Holt Arena last week before falling 23-21. The position to watch: quarterback. Oft-injured ISU QB Tyler Vander Waal left the Sac State game in the second quarter. Freshman Hunter Hays came on for Vander Waal and tossed two interceptions.

I couldn’t help but notice this headline at Sports Illustrated’s The Spun: “NFL World Speculating About Kellen Moore’s Future.” It’s funny how the former Boise State great silences his critics again and again. Writes Mike Hladik, “Some of the talk on social media during and after last night’s game was that Moore will be running his own team sooner rather than later. There’s a chance it could be the Cowboys too, if Jerry Jones decides to get rid of Mike McCarthy and promote the 33-year-old coordinator.” Moore may have called his best game as an offensive coordinator in the Cowboys’ 41-21 win over the Eagles Monday night, especially in the first half. The second half included a two-yard touchdown pass from Dak Prescott to former Broncos star Cedrick Wilson, who was able to keep his toes inbounds.

It’s tough for Boise State men’s golf to break through the media bubble, especially in the fall. But what the Broncos did earlier this week is incredible. They won the Mark Simpson Colorado Invitational in Boulder by 10 strokes on Tuesday, and their second round score of 262 was the third-lowest team round in NCAA history. Boise State’s team score of 818 for the tournament was 14th all-time in men’s college golf. The Broncos went into the week at No. 38 in Golfweek’s national rankings. Meanwhile, coach Dan Potter has hired local standout golfer and tour pro Joe Panzeri as an assistant coach at Boise State. Panzeri graduated from Mountain View High before playing collegiate golf at Washington and San Diego. He has two victories on the PGA Tour Canada.

This Day In Sports…brought to you by BACON FOR HOPE…supporting Hope House in Marsing.

September 30, 2006, 15 years ago today: Boise State wins its 11th straight game over then-members of the Mountain West Conference by shocking Utah, 36-3, in sold-out Rice-Eccles Stadium. Star linebacker Korey Hall set up two scores with interceptions, and fellow senior Colt Brooks notched his first career touchdown on another, as the Broncos had four picks on the day and held the Utes to 178 yards. Things were just as impressive in the stands, as the Salt Lake Tribune estimated 8,000 BSU fans made the trip. And they made noise wire-to-wire.

All should have the Broncos’ attention