Leighton Vander Esch may not have that much to gain today at Boise State’s Pro Day, but Cedrick Wilson does. After a serviceable performance at the NFL Combine a month ago, Wilson will look to show off in position drills today. He did make progress at the Combine following some skepticism at the Senior Bowl. “I thought his Senior Bowl week, he struggled getting off the line versus the press,” said Charles Davis of NFL Network. “That was a thing that he had to really work on. So he went back to his offseason training camp to work on it. You know who he got most of his work against? Derwin James.” James is a projected first-round safety out of Florida State. We’ll see if it pays off.

Other Broncos participating in Pro Day include Brock Barr, Montell Cozart, Alec Dhaenens, Mason Hampton, Gabe Perez, Jake Roh and Ryan Wolpin. Hampton and Roh would seem to have the best shot at undrafted free agent deals in the NFL. Roh will try to demonstate that his lower left leg injury has healed and show the skills that saw him score nine touchdowns on 39 catches as a senior. The standout tight end was injured on a wildcat run near the end of Boise State’s 44-19 Senior Night win over Air Force last November and missed the final three games of the season. Pro Day will begin this morning with measurements and testing (vertical leap, broad jump, bench press), followed by the on-field testing (40-yard dash, shuttle sprints, position drills).

A year from now, we’ll probably see David Moa in the mix at Pro Day. Right now, the rejuvenation of the senior defensive tackle is a focal point of Boise State spring football. Everything Moa needs to prove on the field he proved during his All-Mountain West sophomore year in 2016. But last season didn’t quite measure up. Moa’s sack total dropped from 8.5 to two last season and his tackles-for-loss from 10.5 to 3.5. Coach Bryan Harsin says all the ingredients are there for a Moa Constrictor comeback. “He’s at the point now—it’s really the day-to-day work you do on the field, in the classroom, in the weight room,” said Harsin. Moa has also rebounded from a September disturbing the peace arrest that resulted in his missing the Virginia game. “As a leader, he’s one of our better ones,” Harsin said.

Late this year we’ll see the final edition of the Mountain West-Missouri Valley Challenge—at least on the current four-year contract. But there’s new bite in this series after the NCAA Tournament. Jon Rothstein of CBS Sports reports that the two conferences will make the most of it by pitting Nevada against Loyola Chicago in a rematch of the Sweet 16 clash won 69-68 by the Ramblers 12 days ago. The game will be played in Chicago, according to Rothstein. Loyola had to travel for last year’s Challenge. You know where the Ramblers went—and what happened to them.

It’s time we started getting to know the premiere opponent on Boise State’s 2018 football schedule. Oklahoma State is a week into spring football, with all eyes on who will replace star quarterback Mason Rudolph. Although the competition is billed as wide open, senior Taylor Cornelius is said to have an edge over sophomore Keondre Wudtee after Week 1 of drills. The wild card is Dru Brown, a graduate transfer from Hawaii who will arrive in Stillwater this summer. Brown started against Boise State in the Rainbow Warriors’ 52-16 loss to the Broncos at Aloha Stadium in 2016. He was 16-of-31 for just 125 yards, but he did rush 11 times for 61 yards. The Cowboys also await the summer arrival of Spencer Sanders, ESPN’s No. 8 dual-threat quarterback in the 2018 class. Boise State visits OSU on September 15.

There’s no guarantee Eagle High grad Tanner Mangum will be the starter in his one final shot at playing time on the blue turf this fall. BYU is in the final week of spring football, and the talk has been of a battle between junior Beau Hoge, sophomore Joe Critchlow and true freshman Zach Wilson, the one-time Boise State commit. Mangum is rehabbing his injured Achilles in semi-anonymity. But his recoverery has been quicker than expected, and he’s taking part in non-contact drills this spring. “I’m surprised,” new quarterbacks coach Aaron Roderick said. “He seems to be way ahead of schedule. He’s running with no limp, full speed and sprinting. It’s been good because he’s getting time every day with our guys, he’s learning our offense and he throws in all our throwing drills.” The Cougars and Broncos face off November 3.

It looked like Josh Osich’s status with the San Francisco Giants was tenuous at best at the end of last season. The Bishop Kelly grad had a couple forgettable years out of the bullpen, posting a combined 5.54 ERA in 2016-17. It was discouraging after Osich put up a 2.20 ERA with 27 strikeouts in 28 2/3 innings over 35 appearances as a rookie in 2015. Now he’s hoping for a renaissance. This spring, Osich threw 11 shutout innings in 11 outings for the Giants, striking out 16 batters while walking only three. “I saw what I did in 2015, and I thought I pitched pretty well then,” Osich told MLB.com. “Why not go back to it?” One thing he did was resume holding his hands closer to head-high at the beginning of his pitching motion, contrasting with the lower point of origin that he used the past two seasons.

Now the regular season has started, with extremely mixed results for the one-time Oregon State Beaver. On Opening Night last Thursday, Osich was the first out of the bullpen after a tremendous start by the Giants’ Ty Blach. Osich threw a scoreless, hitless sixth inning with two strikeouts and a walk in San Francisco’s 1-0 win at Dodger Stadium. Then Sunday night, Osich was the first one summoned from the ‘pen again after Chris Stratton had allowed three L.A. runs. Osich gave up two more in two-thirds of an inning, and suddenly his ERA is a bloated 10.80 going into today’s home opener versus the Mariners at AT&T Park.

The official end of Paul J. Schneider’s run as the Voice of the Broncos. Schneider was on Boise State’s football and basketball microphone for 35 years, calling touchdown thrown by everyone from Jim McMillan to Jared Zabransky—and interceptions by everyone from Rolly Woolsey to Marty Tadman. His most famous call of all was Ian Johnson’s two-point conversion that won the 2007 Fiesta Bowl. KBOI had temporarily lost the rights to Boise State football and basketball games that they acquired in 1973, when Schneider was sports director of what was then KBOI-TV and Radio. In 10 days, Paul J. will be fittingly be inducted into the Boise State Athletic Hall of Fame. 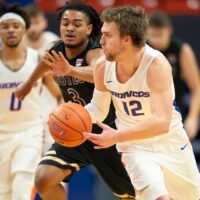