About a year ago, Utah State was No. 21 in the CFP rankings and Boise State No. 23. The Broncos, of course, beat USU 33-24 to move on to the Mountain West championship game. The Aggies would go on to a 52-13 rout of North Texas in the New Mexico Bowl and an 11-2 finish to the season. Coach Matt Wells parlayed that into a job at Texas Tech, and from there Utah State went retro. Gary Andersen, who had left Logan after the 2012 season, returned to the program he built early this decade. The key was that Andersen wanted to be a head coach again. He was 19-7 in two seasons at Wisconsin but wanted to be back in the West. So Andersen went to Oregon State, but burned out after just 2½ seasons and a 7-23 record. He up and left OSU, surrending $12 million on his contract. At USU, Andersen is rejuvenated.

When Andersen landed back in Logan last winter, he summoned Mike Sanford Jr. as his offensive coordinator. Sanford had just been fired as head coach at Western Kentucky but professed to be energized by a return to the O.C. ranks. There’ll be some polite handshakes before and after the game, as Sanford was Bryan Harsin’s first O-coordinator at Boise State in 2014. Harsin was also tight ends coach on Dan Hawkins’ Broncos staff when Sanford was a backup quarterback. This is a pivotal game for Sanford, not only because it’s against his alma mater. He needs his offense to function at a high level. USU was second in the nation in scoring last year at 47.5 points per game—the Aggies are currently 70th at 28.0 points per.

THROWING FOR THE CAMERAS

Media footage posted on Twitter Tuesday showed clips of the very beginning of Boise State football practice. As you might expect, the video of choice was of Broncos quarterbacks Hank Bachmeier and Chase Cord. Both were shown throwing a pass. Of course, everyone in these parts hopes that represents progress in the recovery of Bachmeier and Cord. But is Boise State just playin’ possum? On a related note, the Broncos rolled up 235 yards of total offense in the first quarter against New Mexico last Saturday with Jaylon Henderson at QB. That’s pretty good. Henderson could very well be in the lineup this week. Then again, Utah State piled up a whopping 274 yards in the second quarter against Wyoming. That was with Jordan Love at quarterback, though, and his status remains in question.

If Utah State wins the showdown this Saturday, there could still be a three-way tie for the Mountain Division title, and the Broncos could still make the Mountain West championship game. If the Broncos win in Logan, they clinch the division and host the title tilt on December 7. The West Division is more clear-cut this week. The winner of the San Diego State-Hawaii game in Aloha Stadium will win the division crown and go to the championship game. This will be the first Rainbow Warriors home game with a title of any kind on the line since UH beat Boise State 39-27 for the outright WAC championship in 2007. Hawaii drew 50,000 fans that night. The ‘Bows attracted an announced 19,858 in their last home game against San Jose State.

FROM THE BRONCO NOTEBOOK

In the new College Football Playoff rankings, Boise State is up one spot to No. 20. The Broncos are now right on the heels of Memphis and Cincinnati at Nos. 18 and 19. The Tigers jumped the Bearcats, but only one of them can be the American conference champion and, therefore, eligible for a New Year’s Six bowl. And in the NFL, former Boise State star Jeremy McNichols gets another look, as he has been signed to the Chicago Bears practice squad. McNichols has been on the roster at Tampa Bay, San Francisco, Indianapolis, Tennessee, and now the Bears since being drafted in the fifth round by the Buccaneers 2½ years ago. He’s appeared in three NFL games—his only stats came in 2018 with the Colts: two carries for four yards.

Remember “Butch Cassidy & The Sundance Kid” when Butch said, “Who are these guys?” That’s an understandable question on the College of Idaho campus as the Coyotes prepare for their first-ever appearance in the NAIA Playoffs on Saturday against Ottawa University of Arizona. Nobody knows much about Ottawa—the Spirit have only being playing football for two seasons. But they’ve made a big splash this year, going 9-1 with an average score of 45-17. Ottawa is averaging 478 yards per game behind a red-hot quarterback, Austin McCullough, who’s thrown for almost 3,000 yards and 33 touchdowns against nine interceptions. The Yotes will have their hands full. But hey, they should. It’s the playoffs.

As familiar as BYU seems, Boise State’s game against the Cougars tonight in ExtraMile Arena will be its first against them since 2008. It was a lively six-year series in the first decade of the new century, with the Broncos winning back-to-back games over BYU in 2006-07. The Cougars lead the overall series 9-4. BYU is now under the direction of first-year head coach Mark Pope, who led Utah Valley to three postseason appearances. Boise State will need a lot more than Derrick Alston to win tonight, but that’s a good place to start. Alston is averaging 25 points per game through the first three games of the year, the top mark in the Mountain West and No. 13 nationally. He is the first Bronco to score at least 20 points in each of the first three games of a season since Roberto Bergersen did it 21 years ago.

The Boise State women try to erase a rare misstep from last season when they open this evening’s doubleheader against Washington State. The Cougars, coming off an 11-day layoff, are 2-0 after dominating both Pepperdine and BYU. The Broncos have been looking forward to this one, as last year’s game in Pullman produced probably the team’s low-point of a 28-5 season, a 95-71 loss. We’ll see how the three goes tonight—that may ultimately decide this game. The Broncos are averaging 27 three-point attempts per game. Back on the men’s side, the 2019 United Heritage Mayors Cup wrapped up Tuesday night in Caldwell, and the Yotes got ‘em back. College of Idaho burst out to a 17-point halftime lead and cruised to a 90-69 win over NNU. Nate Bruneel led C of I with 24 points.

After playing 13 of their first 16 games on the road this season, the Idaho Steelheads begin a 12-game homestand tonight when they host Orlando. This is the only meeting of the season against the Solar Bears following a three-game series last March in Orlando that saw the Steelies win two of three games and clinch a playoff spot in the process. It’s the Solar Bears’ first visit to Boise. The hottest Steelhead right now is forward Will Merchant, who scored a goal in each of the team’s three road games last week and leads the team in tallies with eight. Merchant is also tied for second in the ECHL in power play goals with four.

This Day In Sports…brought to you by COLTRIN CENTRAL VACUUM…home of the VROOM Garage RetractVac!

November 20, 1999, 20 years ago today: Boise State clinches its first Big West championship and first berth in a Division I-A bowl game with a 45-14 win over Idaho at Martin Stadium in Pullman. The Broncos broke the game open with a 21-point first quarter, including a 68-yard broken-play touchdown pass from Bart Hendricks to Gavin Reed. Linebacker Kareem Williams sealed it with a 44-yard interception return for a touchdown late in the third quarter. The victory launched Boise State’s 12-game winning streak over Idaho, which has lasted into perpetuity. 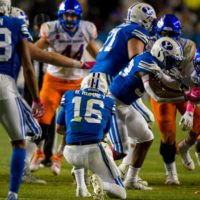 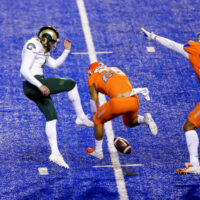 Home for the Holidays makes sense