What would Boise State-San Diego State week be without some thoughts from Bronco Nation’s favorite coach, the Aztecs’ Rocky Long? There’s a story in the San Diego Union-Tribune aimed, it appears, at stirring the pot for Saturday night’s game, headlined: “Boise State remains the national name in matchup with No. 19 Aztecs.” San Diego State is playing the “no-respect” card. “If you go past the Rocky Mountains, they know who Boise State is and they don’t know who the rest of us are,” Long said. “So that makes sense. Those people associate our league with Boise because of history.”

The next subject was Long’s declaration that there’s no “Boise State mystique” after the Broncos beat the Aztecs on that nine-degree night on the blue turf in 2014. “I said that a couple years back because I was making sure everybody knew,” Long said. “Honestly, in our league, I don’t think anybody sees that anymore. Two years ago, they lost three league games. Last year, they lost two. So I don’t think anybody in our league sees that anymore, but everybody past the Rocky Mountains sees that.”

San Diego State is one of only seven undefeated teams left in the country, and Boise State looks to be the biggest test the Aztecs have remaining on their schedule. A New Year’s Six bowl is coming into view. At 6-0, SDSU is, as they’re saying down there, “halfway to history,” The Aztecs’ No. 18 position in the Coaches Poll is the highest ranking for the program in 40 years. With the good comes the speculation, as in, can San Diego State hang onto Long? The resignation of Gary Andersen last week at Oregon State got the water cooler talk going. Some suggested that Long would wait for the UCLA job to come open. “That is people that don’t understand the situation,” Long said. “There’s no way any of those places are going to hire a 67-year-old man.” Besides, he said, “I’m very content where I am.”

There was an interesting dynamic in the young Boise State secondary last week. First, Avery Williams got the start at cornerback in place of Reid Harrison-Ducros at BYU. Then, Kekoa Nawahine established himself as the anchor of the group with his 51-yard interception return. The best glimpse of the future, however, may have come from Kekaula Kaniho, the true freshman safety from Kahuku, HI. Kaniho’s the one that forced what should have been a BYU fumble in the first quarter (the official review, for some reason, didn’t agree). He later delivered a big hit on a tackle-for-loss midway through the third quarter when the game was still in doubt. There’s sure to be a pick in Kaniho’s future. He was Hawaii’s prep Defensive Player of the Year last season after returning interceptions for touchdowns in five straight games.

BYU offensive coordinator Ty Detmer says Eagle High grad Tanner Mangum will start at quarterback Saturday at Mississippi State. You’d have to think, however, that Mangum is just one big SEC hit from landing on the sidelines, so the Cougars have been getting true freshman Joe Critchlow ready this week as well. It was Critchlow whose redshirt year was burned with just over two minutes left in last Friday’s 24-7 loss to Boise State. “We didn’t play him at the end to waste a year for him,” said Detmer. “That was a time in the game where it felt like we could get him in, get him some reps and get some game time because it’s been a while for him. Let him get that feel and the juices flowing and be ready for the next time.” Next time very well could be in Starkville.

Boise State graduate Trent Johnson, who’s been out of basketball since being fired as head coach at TCU a year and a half ago, has been hired as an assistant at scandal-rocked Louisville. He will join the staff of David Padgett, who was appointed interim coach when Rick Pitino was forced out last month. Johnson’s coaching career started at Boise High and morphed into successful stops at Nevada and Stanford—he reached the Sweet 16 at both schools. Johnson’s son and Padgett played together at Reno High when Johnson was coaching the Wolf Pack. He spent last season traveling the country and attended the Boise State-Nevada game in Taco Bell Arena with his former Bronco coach, Bus Connor.

The Idaho Steelheads will be without one of their mainstays when the 2017-18 season opens tomorrow night. Defenseman Corbin Baldwin has been suspended for two games and fined an undisclosed amount by the ECHL after an elbowing penalty that was reviewed and was ruled to be an illegal check to the head. Baldwin, who has played in every regular season game for the Steelies the last two years, will see that streak broken now, as he’ll miss both games this weekend against the Norfolk Admirals in CenturyLink Arena.

The PGA Tour had just finished its season-opening Safeway Open in the Napa Valley last Sunday when a wildfire consumed the grandstands at Silverado Country Club late that night. Tour pros were among the thousands escaping the flames in the Wine Country. Now the tour is on the other side of the world, at the CIMB Classic in Kuala Lumpur, Malaysia. On Monday, former Boise State star Graham DeLaet tweeted, “Land in Hong Kong to hear about the fires in Napa. Thankful my family and the Tour family made it out safe. Thoughts are with those affected.” The field at the CIMB Classic includes Delaet, but it is very different. The top 10 golfers on the Asian Tour Order of Merit are exempt into the tournament. Players from all around the globe qualified for the CIMB off of the Asian Tour.

The Celebration of Life will be held for Connie Thorngren this afternoon at Boise State. Thorngren, the Broncos’ first women’s athletic director in the 1970’s, passed away on October 1 and is certainly worthy of a tribute. She basically founded the Boise State women’s sports program, coaching field hockey, volleyball and basketball before concentrating on hoops—and leading the Broncos to nationals for the first time in 1975 (at that time it was the 16-team AIAW National Tournament). Thorngren stepped away from coaching in 1983 but continued to teach at Boise State until her retirement in 2000. The university owes her a debt of gratitude.

Magic Johnson makes his NBA debut for the L.A. Lakers, scoring 26 points in a 103-102 win over the L.A. Clippers. Kareem Abdul-Jabbar won the game on a last-second shot, and Johnson leaped into Kareem’s arms, overcome by his infectious enthusiasm. Magic’s legend would be sealed at the end of the season when he moved from guard to center in Game 6 of the NBA Finals, replacing Abdul-Jabbar and scoring 42 points to give the Lakers the title over the Boston Celtics. 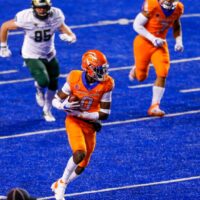 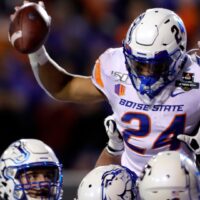