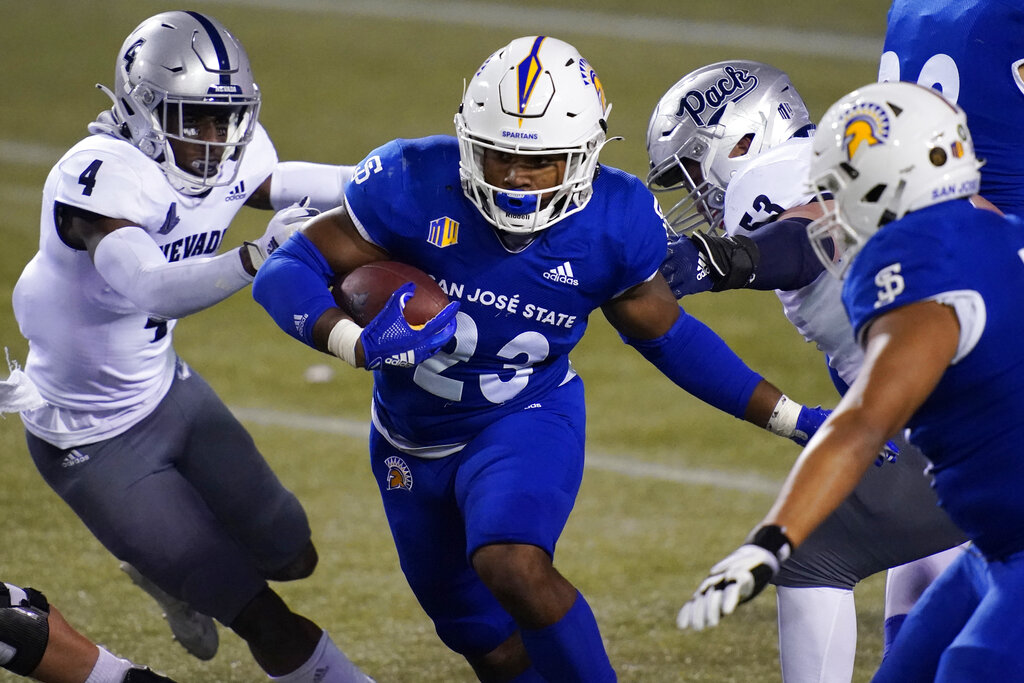 With the health of Boise State running back George Holani in question, we have an instant key to Saturday’s Mountain West championship game against San Jose State in Las Vegas. The Broncos must run and stop the run, and it won’t be as easy to stop it as it was at Wyoming without snow this week. Coach Bryan Harsin said Monday he expects Holani to be ready to go against the Spartans, but count me skeptical. Holani did not look good when he left the field in Laramie. That would leave it in the hands of Andrew Van Buren again. Van Buren rushed for a game-high 79 yards and a touchdown in the win over the Cowboys, but it took him 26 carries to do it. He’s averaging just 3.6 yards per attempt for the season. The positive: Van Buren continues to lead the Mountain West in rushing touchdowns with eight.

San Jose State’s Tyler Nevens, on the other hand, has delivered one explosive play after another. Van Buren’s longest run of the season is 17 yards—Nevens averages more than half of that every time he carries the ball: 8.9 yards per tote. In the past two games, he has rushed for 336 yards on just 28 carries. In the second half blitz against Nevada last week, Nevens busted off two 69-yard runs, one of them a touchdown leading to the 30-20 victory. Numbers are close between the Broncos and Spartans passing games. Stopping the run has to be the differentiator for Boise State. Statistically, San Jose State is better at it, yielding 127.5 yards per game to the Broncos’ 183.5.

Two of my Scott Slant subjects last week were: “The QB behind the curtain” and “The healing tight ends room.” Wasted space, mostly. Quarterback Jack Sears and tight end John Bates were both missing for Boise State at Wyoming, and we don’t know why. If it was COVID-related, does that window go through the Mountain West title game? Without Sears (and true freshmen Cade Fennegan and Andy Peters), Chase Cord had to suit up as an emergency QB, probably far from 100 percent. He certainly would have been capable of handing off, but putting him in harm’s way by attempting a pass would have been a stretch. There’s always tight end Riley Smith, the former quarterback who could probably handle the assignment. (Smith and Tyneil Hopper held down the tight end fort in Laramie without Bates.)

THERE’S A PRIZE IN THE DESERT

The Arizona Bowl has announced that the winner of this Saturday’s game is headed to Tucson on New Year’s Eve. Both San Jose State and Boise State will be invited to bowls—the leading candidate for the losing team in the title tilt is the First Responder Bowl the day after Christmas in Dallas (um, that would have everybody here checking the extended forecast in the Dallas-Fort Worth Metroplex). The team that wins won’t have to sacrifice eyeballs for a trophy. The inaugural Arizona Bowl in 2015 wasn’t even on national TV. This one will be shown on CBS.

Football’s early signing day is Wednesday, and Boise State has one more recruit in the corral ahead of it. Defensive lineman Ahmed Hassanein, a 6-5, 265-pound Egyptian by way of Loara, CA, committed to the Broncos Monday night. Hassanein plans to sign Wednesday before going to Egypt to spend the holidays with him family. He’s apparently a late-comer to football and has huge upside. “Said it last night but really excited to see how Ahmed develops,” said 247 Sports recruiting analyst Greg Biggins. “This is a kid who loves hard work, loves the grind and really wants to be good. He’s not a typical prima donna athlete I see a lot of in SoCal, he’s a worker and has a chance to be really good I think.”

The key date for Boise State right now is December 21. That represents the Broncos’ next scheduled game, the first of a two-game series against New Mexico. The delay in the series requested by the Lobos will work out in Boise State’s favor if it’s after the threshold when Arizona transfer Devonaire Doutrive is eligible to play his first game. We think it is. It may depend on when Doutrive’s fall semester grades are posted by his professors. Only then will the semester officially be in the books. Based on the football team’s experience leading into bowl games in the past, though, it’s typically done by then. Doutrive’s going to be one hungry individual. Not forgetting that UMass-Lowell transfer Donovan Ivory is in the same boat.

The preseason Mountain West polls are looking accurate right now—San Diego State and Boise State still appear to be the top two teams in the conference. The Aztecs have a serious leg up, though, as they’ve climb to No. 18 in the AP Poll and have debuted at No. 20 in the Coaches Poll. The Broncos haven’t received a vote in either yet. SDSU made the biggest jump of any team this week in AP after a convincing 80-68 road win at then-No. 23 Arizona State. The Aztecs are one of only five teams in the country to notch two wins over ranked teams so far this season. Reminder: Boise State and San Diego State aren’t scheduled to meet until the final two games of the regular season at Viejas Arena.

College of Idaho is logging some miles. The Coyotes are never quite sure where they’re going next in this COVID chaos. They actually played Eastern Washington last Friday night and fell 80-56 (I thought it was going to be Sunday—it’s hard to keep things straight). The Yotes have arranged two more games this week, as they travel to Portland tonight to meet the Pilots and to Seattle Thursday night to meet the Redhawks. These are the fourth and fifth countable Division I games of 2020-21 for the Yotes, the most of any NAIA team this season and most in program history

December 15, 1997: In an emotional ceremony at Candlestick Park, the San Francisco 49ers retire Joe Montana’s No. 16 jersey. Montana, considered by many at the time to be the best quarterback in NFL history, led the 49ers to four Super Bowl titles during his 14 seasons in San Francisco. The festivities began with a video replay of Montana’s most famous throw, “The Catch,” his six-yard touchdown pass off his back foot to Dwight Clark that beat Dallas, 28-27, in the 1981 NFC championship game and led to the Niners’ first Super Bowl trophy.