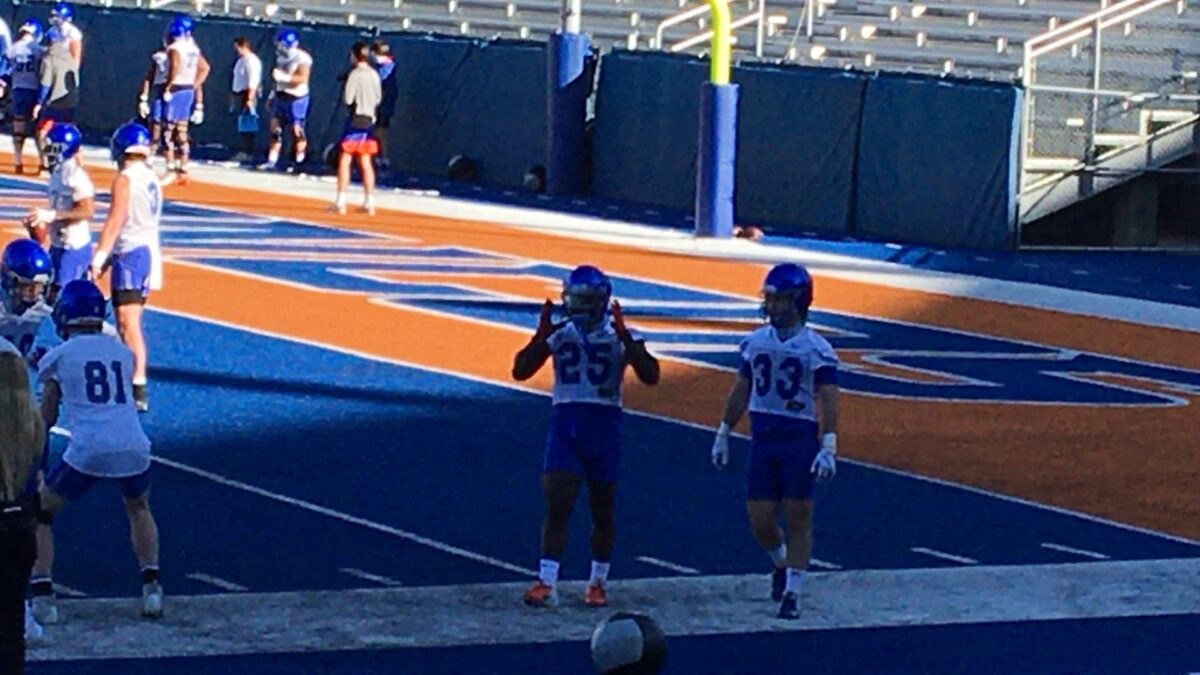 Among the notables suiting up when Boise State spring football debuted last Friday was running back George Holani. He was wearing a knee brace, but there were lots of knee braces out there, many of them precautionary, no doubt. Holani was a full participant in drills. Another was fellow running back Taequan Tyler, a junior college transfer who missed the season due to a torn Achilles suffered last summer. Tyler appeared to be full speed. He was the forgotten man as Boise State’s running game struggled last season following Holani’s torn MCL at Air Force. Would the 5-9, 218-pounder from Waco, TX, have made a difference? There’ll be hype surrounding the arrival of Oregon transfer Cyrus Habibi-Likio this summer. But remember Tyler’s name. The Broncos may yet have what coach Andy Avalos calls “dependable depth.”

Holani was seen only once after Halloween, in a spot start at Wyoming that didn’t last long after he scored the Broncos’ first touchdown. For the season, he logged only 19 carries for 110 yards and two touchdowns, plus seven receptions for 52 yards and two more TDs. That’s good production for what was probably five quarters of football in 2020, but Boise State’s running game struggled without Holani. With Andrew Van Buren forced to carry the load as the feature back, the Broncos were last in the Mountain West with 3.3 yards per rushing attempt. For the record, Van Buren was also out there going through Day 1 drills.

HARSIN IS SET FOR LIFE, DO YOU THINK?

Bryan Harsin didn’t leave Boise State for Auburn just for the sake of coaching at college football’s highest level. Get this: Harsin has signed a contract with the Tigers that cover six years at an average of $5.25 million per season. The deal is replete with bonuses. What could possibly go wrong? Not much. If Auburn were to fire him, Harsin would be owed 70 percent of his remaining salary through the contract term, according to ESPN. Half of that would be paid within 30 days of termination. He made $1.85 million with the Broncos last season, his seventh at his alma mater.

Bob Behler pointed out on Idaho SportsTalk Monday that you may hear the names of Naje Smith and Pavle Kuzmanovic for the first time in a long while when Boise State faces SMU in the NIT on Thursday. With Abu Kigab and Max Rice out, coach Leon Rice may have to go further down the bench and roll the dice against the Mustangs. Smith has scored just 11 points this season and hasn’t played since Game 2 at Nevada five weeks ago. The 6-7 junior forward has logged just 12 minutes in the new year. Kuzmanovic, the true freshman from Serbia, has been on the bench for two months—he also has 11 total points this season.

Boise State has been okay in the NIT, going 4-6 since its first appearance in the tournament 34 years ago. The four victories were all feel-good moments in Broncos hoops history: the 62-61 win over Utah in 1987, the 84-69 triumph over UNLV followed by the 73-70 victory over Wisconsin-Milwaukee in the Idaho Center cameo in 2004, and the 73-68 upset at Utah in 2017. The latter is the only road win ever for Boise State in the NIT. The Broncos’ last berth in the event resulted in a 77-74 defeat at Washington in 2018 in Chandler Hutchison’s final game. That game started like some of Boise State’s recent ones—how about a 5-for-28 ledger from the field in the first half? It ended as one of the best games of Hutchison’s career, as he almost single-handedly rallied the team with 39 points and 14 rebounds.

NNU BUMPS INTO A BUZZSAW

The Northwest Nazarene men’s stay at the NCAA Division II Tournament is over. Colorado School of Mines made sure of it Monday night in an 84-52 Sweet 16 victory in Golden, CO. But what a great building block the two tournament wins over the weekend were for the Nighthawks and coach Paul Rush. NNU was smothered by the Orediggers from the get-go in the third game, shooting a season-low 31 percent from the field. Nighthawks star Ezekiel Alley was held to 10 points on 4-for-16 shooting but was still named to the West Region All-Tournament team. One other postseason note: Big Sky women’s champion Idaho State has been tabbed a No. 13 seed in the NCAA Tournament and will open against Kentucky this Sunday.

BRONCOS RUN INTO THE TOP 10

The Boise State women’s cross country team entered Monday’s NCAA Division I Championships No. 10 in the nation—and came out No. 9. It was the Broncos’ third top-10 finish at nationals, joining the back-to-back sixth-place efforts in 2017 and 2018 (during the Allie Ostrander era). Boise State’s top runner was graduate student Tyler Beling, who finished 39th to earn All-America honors.

March 16, 1989: Fresh off a win over Boise State in the Big Sky championship game, the Idaho Vandals return to the BSU Pavilion five days later to face UNLV in the first round of the NCAA Tournament. The Vandals, behind star junior center Riley Smith, stayed with the Rebels for most of the game before falling, 68-56. It was the first of back-to-back trips to the Big Dance for Idaho and coach Kermit Davis. But the Vandals have not been back to the NCAA Tournament since 1990.