Dennis Dodd of CBS Sports.com has come out with his “2017 Hot Seat Rankings” for college football coaches, ranging from 5, “win or be fired,” to 0, “untouchable.” About half of the nation’s FBS coaches fall in 1, “safe and secure.” That’s where Boise State’s Bryan Harsin is, along with seven of his other Mountain West brethren (including the two newcomers). The Mountain West coach with the hottest seat, according to Dodd, is Utah State’s Matt Wells, who gets a 3 rating (“pressure is mounting”). Two coaches were rated 2, “all good…for now,” Colorado State’s Mike Bobo and UNLV’s Tony Sanchez. The conference did have one “untouchable,” San Diego State’s Rocky Long.

There were only 12 out of 130 FBS coaches to be deemed “untouchable” by Dodd. One of the others is Washington’s Chris Petersen. Coach Pete may be 27-14 overall with the Huskies since leaving Boise State, but it’s a “what have you done for me lately?” world. Last season, of course, UW was 12-2 and made the College Football Playoffs. Idaho’s Paul Petrino is in the same boat. Petrino is rated in the “safe and secure” zone, not because he’s 15-33 overall with the Vandals, but because he led them to a 9-4 record and a Famous Idaho Potato Bowl victory last season.

We don’t quite know what we’re going to get from the quarterback position when Troy comes to the blue turf to challenge Boise State September 2. But we have a good idea of what to expect the week after at Washington State from Luke Falk, he of the 480 yards and four touchdowns on a whopping 71 attempts in last year’s 31-28 loss to the Broncos. A recent story by Stefanie Loh in the Seattle Times wondered what the NFL expects of Falk after he’s drafted next spring. NFL Network scout Daniel Jeremiah wrote a detailed report on Falk, and he compared the Cougar senior to the Washington Redskins’ Kirk Cousins. Hmmm… The 6-4 Falk will have a different look this season. Loh says he played at about 215 pounds last year, but by the end of spring ball, he was up to 226.

Today on KTIK’s Idaho SportsTalk, Jeff Caves and Bob Behler will mark Bob’s 10th season as Boise State’s play-by-play announcer this fall. Behler arrived at a good time in 2008. His first game was Kellen Moore’s debut at quarterback. His third was the Broncos’ monumental upset of Oregon at Autzen Stadium, Kellen’s first road game. So what has changed as the 2017 season approaches? There’s this. Behler grew up in Stockton, CA, but he went to school at the University of Georgia. Before coming to Boise, he was the Voice of the Minutemen at UMass, and he actually had a slight Massachusetts/New England accent his first few years here. Now it’s faded—he sounds all Idahoan.

There was no first PGA Tour victory for Graham DeLaet this weekend, and there’ll be no British Open this month. But who can sneeze at another top 20 finish and a check for $69,500? The former Boise State star was three shots off the lead after a six-under 64 in the first round of the Greenbrier Classic, but he struggled to a 70 Friday and a 71 Saturday. DeLaet finished with a 69 yesterday—a bogey on the 18th cost him a little cash.

There are many who say tonight’s Home Run Derby will overshadow tomorrow night’s All-Star Game. That would be a shame. But there is a former Boise Hawk to follow in tonight’s contest in Miami. The Marlins’ Justin Bour is seeded seventh and will open against one of the most celebrated players in baseball this summer, rookie phenom Aaron Judge of the Yankees. Bour is qualified—he’s having an outstanding season, clubbing his 20th homer of the season Saturday night in Miami’s win over the Giants. Yesterday at AT&T Park, Bour went 2-for-4 and knocked in two runs, bringing his season RBI total to 59 and upping his average to .289.

In 30 years of Boise Hawks baseball, we’ve seen a lot of varied talent come thrrough. There’s been the winningest manager in Northwest League history, an American League MVP and a National League MVP, a bunch of All-Star Game selections, some Rookies of the Year, and a slew of World Series participants. But we’ve never had the cover model for ESPN’s “Body” issue—until now. There he is, the Chicago Cubs’ Javier Baez, without any clothes on, in mailboxes and on newsstands everywhere. The address bar is strategically placed. Full disclosure: Baez played only two games for the Hawks in 2011, going 1-for-6 with an RBI. But hey, he counts.

The Hawks carried a 3-0 lead into the eighth inning last night—then hung on for a 3-2 victory over Vancouver at Memorial Stadium. Boise got it done on just five hits. One of them was the eventual game-winner, a sixth-inning solo home run by Daniel Jipping, his sixth of the season. Juan Pena came on in the ninth with one out, a run in and a man on and struck out both Canadians he faced to notch his second save of the summer.

With a Rose Bowl crowd of 90,185 rooting them on, the U.S. women’s soccer team produces one of the great moments in American female athletics. After the final went scoreless in regulation, the U.S. defeated China 5-4 on penalty kicks to win the FIFA World Cup. It was the Americans’ second World Cup crown, but the first to attract massive attention across the country. The game-winning kick—and one of the most replayed highlights in history—came from Brandi Chastain, who promptly ripped off her jersey, revealing what became soccer’s most famous sports bra ever.

Still some firsts out there for Rypien 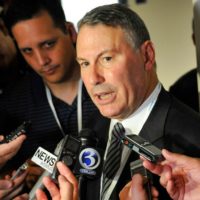 This Day In Sports: One year in – the Broncos are out?

Homecoming in the visitors’ dugout