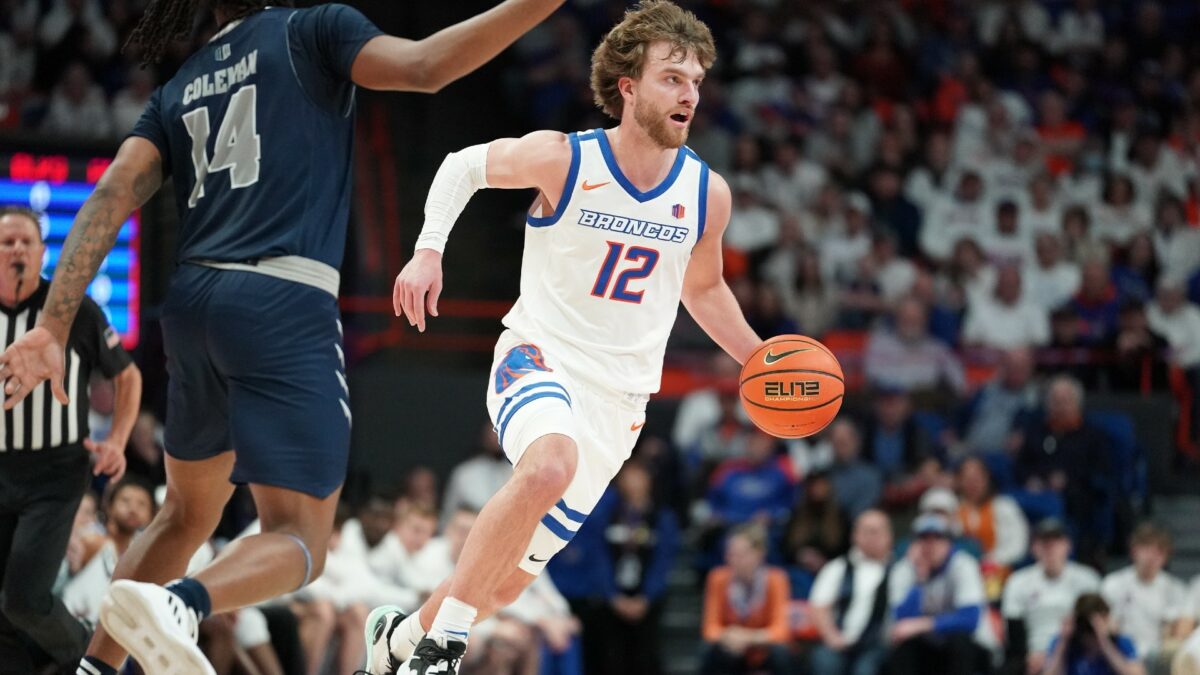 You can’t talk about Boise State’s 77-62 win over Nevada Tuesday night without talking about Max Rice, the coach’s son who’s only starting because of favoritism from his dad, Leon. I jest, of course. (That couldn’t be further from the truth.) Max was in rarified air in Extra Mile Arena, scoring the Broncos first eight points, notching 21 by halftime, and coming oh-so-close to a 30-point game. The anticipation in the building was palpable, and when Rice was sitting on 29 points and hit a layin with just under seven minutes left, the crowd thought he had done it. But no—offensive foul. He ended with 29, the most by a Bronco since Abu Kigab put up 32 against Prairie View A&M early last season. In this, the 55th year of Boise State basketball as a four-year program, there have been only 64 individual performances of 30 or more points.

It was a pivotal victory, moving the Broncos into sole possession of first place in the Mountain West—at least until San Diego State’s game at Colorado State tonight. The progress Boise State has made since opening the conference schedule with a loss in Reno is real. The Broncos have won five straight games, and they’ve won each of the last four by 15 or more points. And last night’s win went a lot deeper than a hot night from Rice. Boise State turned the ball over only eight times and forced 15 by the Wolf Pack. The Broncos locked down defensively in the second half. They used a combination of Tyson Degenhart, Lukas Milner and even Naje Smith to limit the Pack’s seven-footer, Will Baker, to 4-for-10 shooting and just two rebounds. It was a complete game, a Quad 1 win against a really good squad.

There have been three Boise State games since the last Scott Slant column. We need to acknowledge the other two. The 85-68 win at Wyoming last Saturday night was a “take care of business” game. The Broncos were favored by four points and won by 17 against a team that has massive injury issues. And it was the ol’ tale of two halves last Wednesday at UNLV, where Boise State trailed by two at the half. Two of the Broncos’ most dependable scorers, Marcus Shaver Jr. and Chibuzo Agbo, put up only three points in the first half, but they combined for 29 in the second. Degenhart was steady throughout, logging another double-double with 17 points and 12 rebounds (plus six assists).

It’s time to shine the spotlight on Boise State freshman guard Jace Whiting. Okay, he’s an older freshman, as he just returned from a two-year LDS mission about six months ago or so. But he wasn’t supposed to get back into basketball shape so quickly—and specifically, adjust to the mental rigors of the game like he has. We saw a little something when he made his debut in the season opener back in November, but now he’s an ultra-key piece off the bench for the Broncos. Whiting was central to that second-half surge at UNLV, scoring 10 points and draining a pair of three-pointers. The former Burley Bobcat is fearless when attacking the basket and is relentless on defense. I don’t know if any Bronco plays harder.

ENTER THE YOUNG: JEANTY IS NO. 1

Pro Football Focus has released its list of the highest-graded true freshman in college football last season. No. 1 in the country—regardless of position—is Boise State running back Ashton Jeanty. Writes Max Chadwick: “The former three-star recruit was among the top 15 FBS running backs in both overall grade and rushing grade (90.6). George Holani was Boise State’s leading rusher, but Jeanty was more impressive on his touches. Of Jeanty’s 821 rushing yards, 73.8 percent came after contact, a top-10 rate among all Group of Five running backs.” Jeanty saved his best for last—the 178 rushing yards he racked up in the Broncos’ 35-32 win over North Texas in the Frisco Bowl.

Boise State’s super-senior list for the 2023 season is official now. There will be eight of them, including offensive linemen Cade Beresford and Garrett Curran, wide receivers Billy Bowens and Stefan Cobbs, tight end Riley Smith, EDGE Demitri Washington, defensive end Cortez Hogans and linebacker DJ Schramm. That’s especially big on defense. We already knew about Hogans, but Washington and Schramm hadn’t announced their decisions. With all the attrition along the defensive line, Washington and Hogans are much-needed individuals. And Schramm, a great story as is with his come-out-of-nowhere year in 2022, brings an anchor to the middle of the Broncos defense. His leadership will be essential next season.

AND AN ASSIST FROM THE PORTAL…

Add the return of Washington to what Boise State has culled from the transfer portal, and the Broncos appear to have calmed the nerves of those who predicted doom on the D-line. Since Boston College transfer Kivon Wright committed a little over a week ago, Boise State has brought in EDGE Tyler Wegis from Utah and defensive tackle Sheldon Newton from Northern Arizona. Newton has the ability to fill up the middle a la the departed Scott Matlock and Divine Obichere—he’s 6-4, 316 pounds. Also, with JL Skinner off to the NFL, the Broncos have picked up a similarly-sized safety, Milo Lopez (6-3, 200) from Cerritos College in California.

BACHMEIER TO LET IT FLY IN FLORIDA?

The prevailing rumor was that former Boise State quarterback Hank Bachmeier was going to emerge from the transfer portal on the Cal campus. But that didn’t work out for whatever reason, as the Bears brought in transfer Sam Jackson from TCU. So word is that Bachmeier is going all the way across the country to join Florida Atlantic, in the same state he made his stunning collegiate debut in 2019. If the NFL is the ultimate goal, he’ll have to scrub the first four games of last season from everybody’s memory and play lights-out. The Owls went 5-7 last season, but they have a good coach in Tom Herman, the former Texas and Houston coach who was hired last month. Bachmeier will have to get used to smaller crowds—FAU averaged 20,679 fans per game in 2022, helped by one throng of 30,000-plus against UCF.

SHAK WILL BE BACK THIS WEEK

Among Idaho ties in the NFL, well, a lot of them saw their seasons end last weekend. One who didn’t is former Boise State star Khalil Shakir. The Buffalo Bills are moving on against the Cincinnati Bengals, and Shakir helped. He had three catches for 51 yards, one of them a 31-yarder from Josh Allen midway through the fourth quarter when the Bills faced a third-and-one at their own 19 in the eventual 34-31 win over Miami. The 17 yards-per-catch were right on Shakir’s season average. Also advancing are DeMarcus Lawrence and Leighton Vander Esch of Dallas. The former Broncos helped frustrate Tom Brady in Monday night’s 31-14 win at Tampa Bay (especially LVE). Meanwhile, Cowboys fans are probably blaming Kellen Moore for the missed extra points, if you know what I mean.

STEELIES LOOK TO REGAIN THEIR GROOVE

Since their franchise-record 12-game winning streak was snapped January 6, the Idaho Steelheads are 2-3. But they’re still pretty darn good. The Steelheads still have the best record in the ECHL at 28-6-1. They looked like their old selves last Saturday night in a 4-0 victory over Utah. Goaltender Remi Poirier notched his second shutout and eighth straight win, and the defense was huge for him—Poirier only had to make 22 saves. Following a 4-1 loss to the Grizzlies in a Martin Luther King Day matinee, the Steelies head to Rapid City for a pair of games this Friday and Saturday.

MERRITT TO THE DESERT

Troy Merritt’s next PGA Tour assignment is The American Express, beginning tomorrow on three courses in La Quinta, CA. Merritt will be first off the tee in the first round on the Pete Dye Stadium Course at 9:30 a.m. our time. The former Boise State star played well last week at the Sony Open in Hawaii, but so did everybody else. Merritt carded three round in the 60s and finished four-under for the tournament, but he tied for 65th. Merritt came away with just under $17,000.

January 18, 1983, 40 years ago today: The International Olympic Committee presents Jim Thorpe’s family with replicas of his Olympic medals, 70 years after they were taken away. Thorpe, known 100 years ago as the greatest athlete in the world, won gold medals in the decathlon and pentathlon at the 1912 Summer Games in Stockholm. Later that year Thorpe would lead his football team, Carlisle Indian School, to the national collegiate championship. But his Olympic medals were stripped when it was reported he had made $25 a week playing semipro baseball a couple years earlier. The IOC restored the medals in 1982. 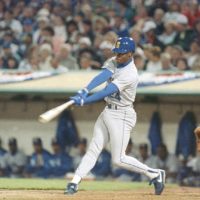 This Day In Sports: A hot start to Junior’s hottest season