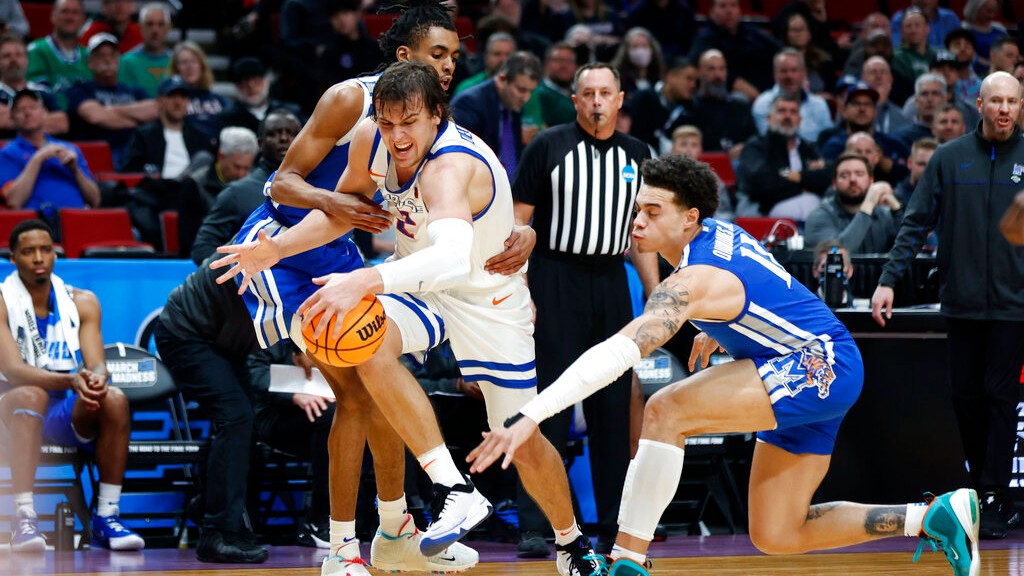 Who is next season’s Abu Kigab for Boise State? The consummate leader? At this point, it’s kind of obvious. Tyson Degenhart is on an amazing trajectory, and even as a sophomore, he is poised to be the face of the Broncos. Degenhart is more soft-spoken than Kigab, but he sure has loud body language on the court. And his volume should increase in the timeout huddles and in practice moving forward. The body language? Degenhart feels momentum swings, as evidenced by his upward-motion waving to the crowd after a big bucket and his arms jutting up into the air while he’s lying flat on his back after taking a charge. He’s already a star after starting 28 consecutive games and averaging 9.9 points for the season. Now, Degenhart’s intangibles will really come into play as the Broncos try to sustain success.

THE WAIT FOR ROSTER CHURN

Now we find out what’s out there in the big bad world of basketball for Marcus Shaver Jr., Emmanuel Akot and Mladen Armus. Will one or two or three of them return to Boise State? Shaver’s season did not end on the upswing, through no fault of his own. An undisclosed sickness affected him in the postseason, and in the Mountain West and NCAA Tournaments, Shaver went 7-for-39 from the field and 1-for-14 from three-point range. Bronco Nation hopes he’ll come back for more building of his resume. Akot could have overseas money waiting for him, but if he’s really thinking NBA, another season in Boise would be the way to go. For Armus, there’s a pro circuit back home, the Basketball League of Serbia, that may be calling his name. This is going to be an interesting couple of months.

Regardless of who comes back, developing depth next season is at the top of Boise State coach Leon Rice’s to-do list. Rice commonly used between seven and nine players this season, and the average needs to be closer to nine if the Broncos are to sustain success. (Memphis used 12 in the first half alone against Boise State last Thursday.) Max Rice was always the sixth man, and Naje Smith was usually the seventh, but even the Energizer Bunny had games where he played single-digit minutes. Lukas Milner was used sparingly but delivered on some jaw-dropping clutch plays, and Pavle Kuzmanovic played confidently when he got the chance. Now we’ll have to see what can happen with the mysteries at the end of the bench: sharp-shooting R.J. Keane, 6-10 Burke Smith, and Tri-Cities guard Kobe Young.

Any bench talk has to start with Max Rice. The junior from Bishop Kelly had a remarkable season after the strangest of starts as he worked his way to 100 percent following a broken foot in the Mountain West Tournament last year, plus offseason hip surgery. After beginning the campaign 1-for-23 from three-point range, which was supposed to be his sweet spot on the stat sheet, Rice went 23-for-67 (a serviceable 34 percent) the rest of the way. While averaging less than 22 minutes per game, he also added 17 steals and 33 assists. Rice’s contributions weren’t as obvious this season, but they amounted to more.

FROM NAMPA TO MUST-SEE TV BY THE BAY

Three years ago, Adonis Arms was playing for Northwest Nazarene, averaging 20.6 points per game and earning Great Northwest Player of the year honors for the 20-8 Nighthawks. Then Arms decided to try his hand at a higher level, transferring to Winthrop, redshirting a year, and averaging 10.4 points per game there last season. Arms graduated from Winthrop, and now he’s at Texas Tech as a super-senior starter for the Red Raiders. He’s gone from playing Simon Fraser in Nampa to the biggest game of his life—Duke Thursday night in the Sweet 16 in San Francisco. Will Arms and his teammates be the ones to end Mike Krzyzewski’s storied coaching career? Arms put up 15 points in the first round in Texas Tech’s rout of Montana State—then settled for five in a 59-53 second round win over Notre Dame.

THE TRACKING OF TILLER BEGINS NOW

Boise State’s first football commit of the 2023 class is a quarterback: C.J. Tiller, who transferred to Rancho Cucamonga, CA, for his senior year. Tiller gave the Broncos his verbal last Friday after a campus visit a couple weeks ago. He’s a 6-3, 200-pound three-star recruit who threw for 3,886 yards and 36 touchdowns the past two seasons at Williams Field High in Gilbert, AZ. He’d be a truefreshman in 2023, so it’ll be a long time before we know how this pans out, but Tiller seems like a really good kid. Ron Counts of the Statesman chronicled his battle with Crohn’s disease that almost ended his career, requiring 13 surgeries between the sixth and eighth grades. If Boise State offensive coordinator Tim Plough is a great developer of quarterbacks, Tiller sounds like a prime candidate for that.

READING BETWEEN THE RB LINES

Coach Andy Avalos gave spring football props to one particular Boise State position group on offense before the Broncos scattered for spring break. And it’s the unit everybody wonders about. Avalos said the running backs have been performing at a high level. Maybe we can connect some dots there. George Holani is healthy, and Tyler Crowe must be doing his job. But there are only five running backs on the roster. That leaves Taequan Tyler, Danny Smith and true freshman Ashton Jeanty. Smith is a journeyman back, and Tyler is trying to crack the rotation. So Jeanty must be having an impact on Avalos’ evaluation, right? And if he is, Jeanty’s decision to graduate early from Lone Star High School in Texas is paying off. The 2022 season is setting up well for him. I’m told he’s not going last in drills.

JONES JUMPS UP THE LEADERSHIP LADDER

One of the greatest pleasures of watching college football is seeing players develop from anonymous freshmen into unexpected stars. At the safety spot, JL Skinner was not an unexpected star for Boise State. You’d have to say Tyreque Jones was, though. Beyond Jones’ vast improvement in ability is his emergence as a leader. “I’ve grown a lot—maturity, leadership, as far as knowing the defense, I can help just about anybody that’s on the field,” Jones told the media last week. “Being a lot more vocal, taking control of the defense. And my position asks a lot, demands a lot, setting the coverage and making sure we as a defensive corps are all on the same page.” Jones was fourth on the team with 52 tackles last year and added two interceptions and a forced fumble. He’s on a par with Skinner now.

A year ago, the Dallas Cowboys elected not to pick up the fifth-year option on Leighton Vander Esch. But the former Boise State star will get a fifth season in Dallas nevertheless. Vander Esch, who bounced back nicely for the Cowboys last year after a couple of injury-plagued campaigns, won’t be getting the big money (by NFL standards). But he’ll take what he can get, and that’s a one-year contract that can max out at $3 million. Vander Esch started 16 games for Dallas in 2021, making 72 tackles with a sack and an interception.

IT TAKES A WHOLE HAND TO COUNT ‘EM

The Idaho Steelheads have the reigning ECHL Player of the Week going into tonight’s game against the Wichita Thunder in Idaho Central Arena. It doesn’t take a rocket scientist to figure out who it is. In just his second game since being acquired by the Steelheads in a trade, forward Ryan Dmowski scored five goals and added an assist in last Saturday’s win over Utah. The five goals tied a 22-year old franchise record held by the legendary Cal Ingraham. It was the first career hat trick for Dmowski, who came over from the South Carolina Stingrays in a trade one week ago. He became the 34th player in ECHL history to score at least five goals in a game.

ICING FOR C OF I’S O’NEIL

Jake O’Neil’s first basketball season at College of Idaho wraps up with an All-NAIA Tournament Team honor. O’Neil, the former Fruitland Grizzly and one-time Boise State golfer, posted a pair of double doubles as the Coyotes reached the quarterfinals in Kansas City. Also named to the All-Tournament Team: former Mountain View High star Jalen Galloway, who gets a ring as a member of Loyola of Louisiana’s national championship team. Galloway, a former Yote, scored four points Tuesday night as the Wolf Pack beat Talladega 71-56 to secure the crown. The Yotes gave Loyola its closest call of the tournament, falling 60-53 last Saturday morning to finish their historic season 32-5.

March 23, 2014: Wichita State, the first team ever to start a college basketball season 35-0, sees its undefeated run come to an end in a 78-76 loss to Kentucky in the round of 32 at the NCAA Tournament. It was the Shockers’ first loss since a Cinderella run to the Final Four the year before. The Wildcats, who had beaten Boise State 70-55 three months earlier, did it with one of John Calipari’s one-and-done teams on the floor. Two UK players, Julius Randle and James Young, would be picked in the first round of the NBA Draft that June.

Jake Plummer: ‘The Snake’ goes from Hill Road to the Hall 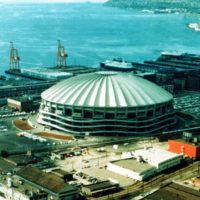