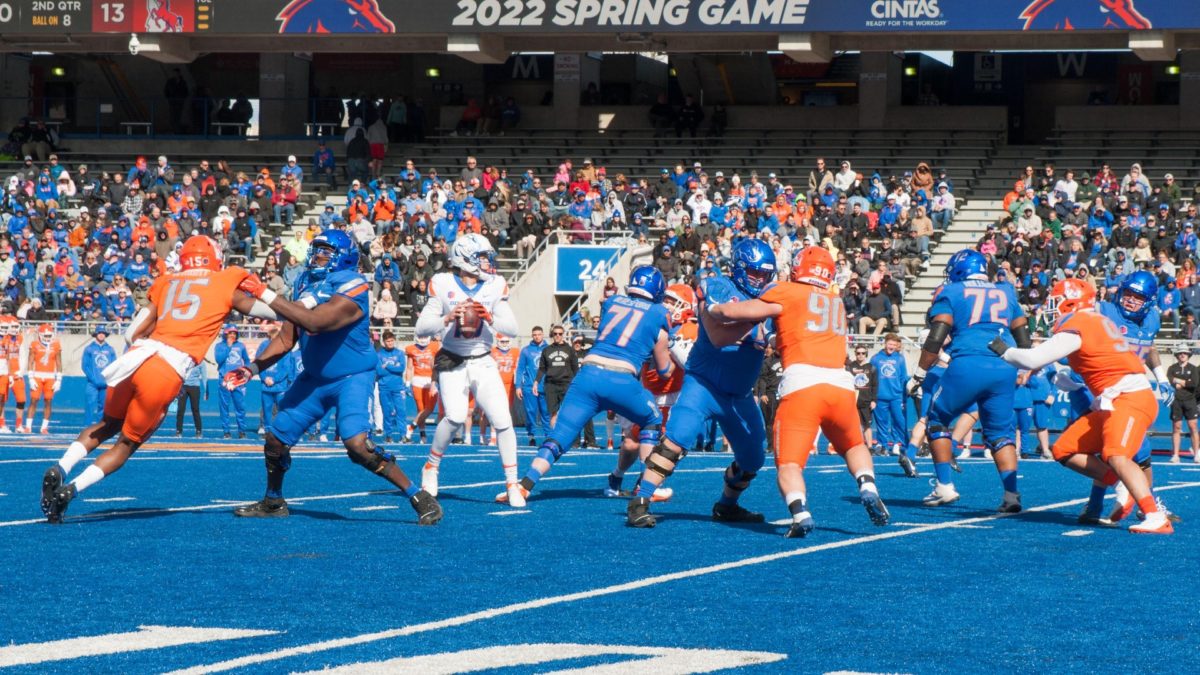 It’s kind of where Boise State is right now. Bronco football is part of the national conversation, but only in this context from Stewart Mandel’s College Football Mailbag at The Athletic: “Which Group of 5 team is positioned to be the next Boise State/TCU/UCF?” Mandel lists these candidates: SMU, Memphis, Appalachian State, UTSA, UAB, San Diego State, Louisiana, Coastal Carolina, Liberty. Ain’t no Broncos there. Mandel does tip a cap to their longevity. “Boise State sustained success for decades over multiple coaches, while TCU did it with one coach. UCF has had very high highs and low lows. Based on history, a program needs to recruit near the top of the G5 to get up there, and it needs to have resources in place to sustain it.” Right out of Jeramiah Dickey’s playbook.

NOT MUCH ‘O’ IN THE SPRING GAME

It was a standard Spring Game at Boise State last Saturday. Fans of the defense were happy—fans of the offense, not so much, as the defense dominated 42-28, utilizing that complicated scoring system. Bronco Nation has to keep in mind how good the defense looked when it reviews the combined quarterback stats in the game: just 17-of-42 for 130 yards with one touchdown and three interceptions. The guy on offense who looked the part was wide receiver Stefan Cobbs, who pulled in six catches for 61 yards and the lone TD.

IT STARTS WITH THE QUARTERBACKS

The immediate future for Bronco football is—for the fourth straight year—Hank Bachmeier. There normally aren’t lots of touchdown passes in the Spring Game, so Saturday didn’t tell us much with Bachmeier’s one TD. But touchdowns will be a measure of Bachmeier’s success as a senior. In three seasons, he’s thrown for 35 of them. To be fair, he’s missed seven games due to injury, and the 2020 season was sliced in half by COVID. But last year, Bachmeier appeared in all 12 games and had 20 touchdown passes. Not that many. And the Spring Game wasn’t much of a table-setter for this fall. Nor was it for backups Sam Vidlak and Taylen Green. Although I’d maintain that we still haven’t seen a true picture of Green. He didn’t get to run in live situations, and, well, that defense was good.

THE O-LINE WILL TAKE SHAPE, THOUGH

There’s reason for optimism on the Broncos’ offensive line. The shaky Spring Game numbers on offense weren’t helped by the absence of left tackle fixture John Ojukwu and guards Garrett Curran and Ben Dooley. But Washington State transfer Cade Beresford was solid in Ojukwu’s place and is poised to hold down the right tackle spot moving forward. And Kekani Holomalio-Gonzalez eased back into his center spot after almost eight months on the shelf. The image that’s hard to get out of your mind is the photo of gargantuous 6-5, 310-pound offensive lineman Oluwafunto Akinshilo, the junior college transfer who became part of Boise State’s 2022 recruiting class Friday. He’s eligible immediately.

THE CORNERS CLEAN UP

Caleb Biggers was first name out of Boise State coach Andy Avalos’ mouth when Bob Behler asked him after the Spring Game who stood out in spring football. Biggers, who returns as a super senior this year, is a key reason everyone’s so high on the Broncos secondary now. The 2021 Bowling Green transfer notched three tackles in the Spring Game Saturday and—more importantly—two pass breakups. It was very difficult for any receiver not named Cobbs to get separation. Biggers’ star continues to rise. He was a backup until Markel Reed went down with an injury in Game 5 last year. Then Biggers grabbed the starting job at cornerback and held on tightly. Reed will have to battle to regain it. Biggers was the top tackler among the corners last season with 34 stops.

IT TAKES A VILLAGE TO BUILD A VILLAGE

Trying to parse out the highlights of Boise State’s Athletics Master Village unveiled last week is tough. At the top of the list is a new Varsity Center. Makes sense, as the current one has been there in some form since Bronco Stadium was built in 1970. I like the 360-degree concourse at the stadium. If everything goes according to plan, capacity will top 40,000. That’s a good number for whatever comes down the pike. You know what will disappear there as these projects are under construction and then completed: parking spaces. At ExtraMile Arena, new club and loge seating would decrease capacity (which is fine) and increase revenue (which is fine). And the idea of a 5,000-seat arena for Olympic sports is very cool.

When asked about the top priority on Boise State’s 12-step wish list for its Athletics Master Village, Dickey definitively said Friday on Idaho SportsTalk it’s the east side of Albertsons Stadium. It has to be. That’s the stadium’s most glaring weakness—and the university’s biggest opportunity to create a cash cow. Now what the Broncos need is a financial jump-start.

What could really get this off the ground? I look at the name “Athletics Master Village” and think its begs for a title sponsor. I mean, why not name the whole enchilada? It could be called “Jackson’s Village” (not to put pressure on John Jackson or anything). Then it could be branded that way. Any ancillary event around Bronco football, basketball, soccer, gymnastics or volleyball would be taking place at (“Insert Name Here) Village. And Dona Larsen Park could be (“Insert Name Here) Village East.

When a recruiting analyst like Greg Biggins says Boise State won a tight recruiting battle for offensive lineman Jason Steele, believe him. The Broncos beat out Arizona State, Cal, San Diego State and Fresno State for Steele, who hails from the same California high school (Murrieta Valley) as Hank Bachmeier. Biggins calls Steele one of the top O-linemen in the region. He’s playing tackle in high school but projects as a center or guard in college. Steele is the second straight Broncos commit to hold multiple Power 5 offers, as linebacker Wyatt Milkovic gave his verbal last Friday. Milkovic had been offered by Cal, Colorado and Iowa State. This 24/7 quote from Milkovic was enlightening: “(Boise State doesn’t) offer 300 to 400 kids so when they actually offer, it’s a lot more special.

STEELIES HANGIN’ BY A THREAD

The Idaho Steelheads’ chances of extending the longest postseason streak in North American pro sports are on the ropes as they wind up the regular season this weekend at Utah. The Steelheads need to beat the Grizzlies twice and hope for a lot of help to see their 23rd consecutive playoff run. There have been times during the streak that every team in a division made the postseason field. This is not one of those years. If it does end in West Valley City, it’ll bring a premature exit to captain A.J. White’s season. White was named the Steelheads’ 2021-22 Most Valuable Player after leading the team in scoring with 25 goals and 42 assists.

After some rest and relaxation at his Meridian home last week, Troy Merritt tries to pick up where he left off on the PGA Tour as he tees off Thursday morning in the RBC Heritage at Hilton Head, SC. The former Boise State star is coming off his second-best payday of the season: $344,000 after a tie for fourth two weeks ago at the Valero Texas Open. Merritt is 48th currently in FedExCup standings and is in good position to qualify for each of the first two legs of the FedExCup Playoffs late this summer.

Former Boise State star Coby Karl is capably following in his dad George’s footsteps, coaching the Delaware Blue Coats into the G League Finals this week. Game 1 of the best-of-three series against the Rio Grande Valley Vipers was Tuesday night on ESPN2, with Delaware falling 145-128. Karl, who previously led the L.A. D-Fenders, guided Delaware to a 22-10 regular season record. His G League roots go back to his days as a member of the Idaho Stampede, for whom he played 98 games from 2008-13. Karl played for the Broncos from 2003-07.

April 13, 1997, 25 years ago today: Tiger Woods, playing in his first Masters at the age of 21, becomes the youngest player ever to win the tournament, with a record-low score of 270 and a record-high victory margin of 12 strokes over Tom Kite. This is a big day in Masters history. In 1975, Jack Nicklaus won his fifth Masters, edging Tom Weiskopf and Johnny Miller by one stroke. And on this day in 1986, the 46-year-old Nicklaus shoots a 30 on the back nine and a 65 for the final round to become the oldest player ever to win the Masters.