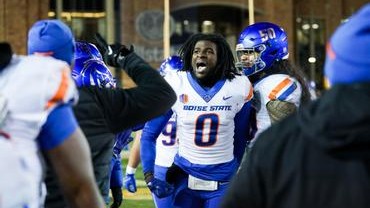 Boise State wants to keep its eye on the prize, and the prize this week is not the Mountain West championship, it’s an undefeated conference season. The Broncos are playing the defending MW champions Friday morning on big boy CBS, and this is not a time to take the day off. Andy Avalos gave a “next question” answer Monday after being asked how he was going to approach this game with the title game berth already wrapped up. Boise State appears to be all in, as it should be. If Stefan Cobbs, Ezekiel Noa and Tyreque Jones, for example, aren’t close to 100 percent, they shouldn’t play, of course. But anyone else enduring the usual nicks of a long season needs to pull out all the stops to get to that 8-0 Mountain West record. It would be disappointing if they were looking ahead. Fresno State can wait.

Last year, the Boise State defense played its best red zone game of the season in the 27-3 win at Utah State. The Aggies rolled up 192 yards in the first quarter and 317 in the first half, but they had not a point to show for it. And, as you know, USU went on to win a title after they laid that egg in Logan. The point is, this team can move the ball, putting up 35 points against San Jose State, which has one of the conference’s best defenses. The Aggies have their own George Holani in Calvin Tyler Jr., the Oregon State transfer coming off a 125-yard game with three touchdowns. Tyler has six 100-yard efforts this year. And you remember the Titus Swen Show last week in Laramie. USU has been improving every week since its 1-4 start, winning five of their last six games and becoming bowl-eligible.

THERE’S THIS GUARANTEE ON SENIOR DAY

Boise State’s two lead characters in the end-of-game drama have won Mountain West honors, and why not? The Defensive Player of the Week is JL Skinner, who had the interceptions on consecutive snaps in the final two minutes to seal the 20-17 win at Wyoming (the first one should have, the second one did). And the Freshman of the Week is Taylen Green. As for Skinner, we don’t know exactly who all will be walking for Senior Day on Friday morning, but we do know one of them will be Skinner. The Senior Bowl selectee is coming down the home stretch, having gone over 200 career tackles last Saturday while notching his sixth and seventh career interceptions. And remember that he played only eight games as a true freshman in 2019 and six during the COVID year in 2020.

Dirk Koetter brought this up Monday, and a couple other people had brought it up to me over the weekend. That touchdown-saving tackle on Wyoming’s dramatic final-minute fumble return was not Green’s first of the year. Green also prevented a TD after a San Diego State interception in September. It was the very first possession of Green’s very first start, and he stopped the Aztecs’ Dezjhon Malone after a 31-yard return. The coolest story yesterday was Koetter saying TCU coach Gary Patterson offered Green a scholarship as a defensive end out of high school. Seriously. Now, is he the favorite for Mountain West Freshman of the Year? Who else could it be? The only freshman on the preseason all-conference team this season was Colorado State tight end Tanner Arkin. He has 13 catches for 110 yards.

After Boise State’s sixth win three weeks ago, we heard about how that made the Broncos bowl-eligible for the 25th straight year, the third longest streak in the nation behind Ohio State and Georgia. But what Boise State did last Saturday night at Wyoming was far more significant. The Broncos clinched their 25th straight winning season, and that is the longest FBS streak in the country. Since the Broncos last had a losing season, every other major college program has had one. Examples: Alabama in 2000, 2003 and 2006. Clemson in 1998 and 2010. Georgia in 2010. And Ohio State in 2011. That is a remarkable Broncos run. And to think that the last week of September, we wondered if Boise State would even get there this year. Now this team has a shot at a 10-win season. Or more.

VANDALS RESUME TOO GOOD TO IGNORE

Idaho has lost four games this season, but none of them was a bad one, and the selection committee recognized that in giving the Vandals a berth in the FCS Playoffs. Idaho travels all the way to Southeastern Louisiana Saturday in the first round. Hopefully quarterback Gevani McCoy will be in the lineup. McCoy has been named one of 25 finalists for the Jerry Rice Award that goes to the FCS Freshman of the Year. Five of them are QBs, and McCoy is the only one to lead his team into the playoffs. He also has 25 touchdown passes, tops among that group. McCoy has only thrown five interceptions this season.

Former Boise State and now former Auburn coach Bryan Harsin is interested in the Colorado job, according to Dennis Dodd of CBS Sports. Dodd says Northwestern defensive coordinator Ryan Walters “is largely considered the favorite.” But the Harsin thing sure is ironic. The Buffaloes interim coach right now, Mike Sanford, is his former offensive coordinator with the Broncos. And Harsin saw the guy who gave him his first job at Boise State, Dan Hawkins, go to Boulder 17 years ago not have a tremendous amount of success.

CAN DINWIDDIE BE COAXED SOUTH?

Former Boise State quarterback Ryan Dinwiddie, now head coach of the Toronto Argonauts, is on top of the CFL world now after leading his team to the Grey Cup championship last Sunday. The Argos took a wild 24-23 win, rallying from a nine-point deficit in the fourth quarter. A blocked field goal by Toronto in the final minute sealed it. Now speculation is bubbling about the possibility of Dinwiddie becoming offensive coordinator at his alma mater. I’m sure his salary information is out there, but I haven’t seen it. That’s important: can the Broncos pay be better than that of a CFL head coach? There’s also this: Dinwiddie told Idaho SportsTalk last week that his wife is from Calgary and that his family loves Toronto.

BRONCOS SHAKE IT OFF IN SOUTH CAROLINA

I wonder how we’ll look back at the Myrtle Beach Invitational at the end of Boise State’s hoops season in March. There was an incredible bounce-back from the discouraging 54-42 loss to Charlotte last Thursday. Coach Leon Rice said after that one, “I’m going to learn a lot about my team the next 24 hours.” He sure did. Boise State thumped Loyola Chicago 70-48 on Friday, then knocked off Colorado 66-53 Sunday night to win the fifth-place game. This is a Buffaloes team that had put up 103 points in a rout of Texas A&M in the tournament. Marcus Shaver Jr. led the charge again, posting a double-double with 20 points and 10 rebounds and adding three steals.

Th Broncos started slowly in each of their first three games this season, but nothing like that opener in South Carolina. How about a 40-minute slow start against Charlotte? The only drama was: would the Broncos top the 39 points they scored a year ago versus Cal State Bakersfield? Boise State shot 31.5 percent from the field. But the Broncos completely turned it around over the weekend. And they got some good news while they were there. Boise State landed an on3.com Top 150 recruit last Thursday, 6-5 guard Chris Lockett Jr, a four-star from New Orleans. Lockett’s National Letter of Intent is already signed, sealed and delivered. He also had scholarship offers from Ohio State, Kansas, LSU, Baylor, Memphis, Georgetown and others.

College of Idaho was swept last year by Northwest Nazarene in the United Heritage Mayors Cup. That was the scene-setter for Game 1 of the 2022 series between the two Canyon County rivals Tuesday night. And it was in doubt until well past the final regulation buzzer. The Coyotes broke through, though, winning 70-67 in overtime. And the Yotes did it at Johnson Sports Center, the first time they’ve won in Nampa in eight years. This was the 210th meeting between C of I and NNU, the oldest basketball rivalry in the Gem State, dating back to a 23-16 College of Idaho win in 1933.

I can’t remember a hotter start to an Idaho Steelheads season than this one. The Steelheads are 10-2-1 after a three-game sweep of the Utah Grizzlies last week in West Valley City, and they’re finally home again to begin a three-game series against the Allen Americans. What stands out is goal differential. The Steelies have outscored opponents by more than two goals per game so far (3.92-1.85). They’ve allowed the fewest goals per game in the ECHL and have held foes to two or less in 10 of 13 games. Part of that equation is the penalty kill—Idaho leads the league in that category as well at 93.5 percent.

November 23, 1972, 50 years ago today: Oklahoma avenges its loss to two-time defending national champion Nebraska in the previous season’s “Game of the Century” with a 17-14 win in Lincoln. Instead of the anticipated duel between the Cornhuskers’ eventual Heisman Trophy winner, Johnny Rogers, and the Sooners’ Heisman runner-up, Greg Pruitt, it was turnovers that told the tale. Nebraska had six of them. Oklahoma would finish the season 11-1 and ranked No. 2 in the country after blanking Penn State 14-0 in the Sugar Bowl. The Huskers concluded legendary coach Bob Devaney’s final season 9-2-1, finishing No. 4 in the final AP Poll after routing Notre Dame 40-6 in the Orange Bowl.