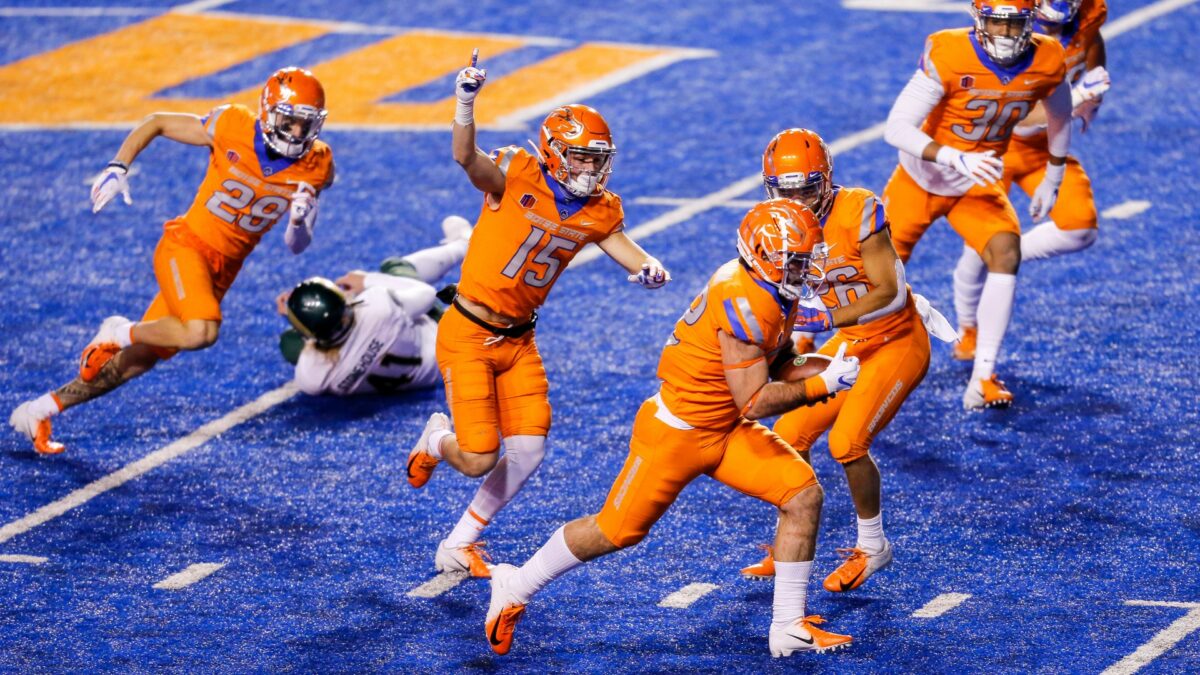 When Isaiah Bagnah was moved to weakside linebacker early in Boise State’s fall camp, the writing seemed to be on the wall on the depth chart. Bagnah, the junior from Lethbridge, Alberta, has shown he has the “it” factor the past two seasons with a combined nine sacks. Competing with Bagnah was going to be a formidable task for senior D.J. Schramm, but he’s been up to it. Schramm has been among the most-praised players during camp and indeed has a chance to start in 10 days at Oregon State. He was a highly-touted member of the Broncos 2018 recruiting class but has only 36 career tackles. Schramm is best-known for taking a blocked punt by Avery Williams in for a touchdown against Colorado State in 2020. Props to Schramm for sticking it out.

AROUND THE WATER COOLER: TIGHT ENDS

It’s annually a trendy topic for Bronco Nation: What about the tight ends? It’s a topic right now, coming off a season that saw Boise State tight ends combine for just 24 catches covering 326 yards with four touchdowns. Coach Andy Avalos has praised both incumbent senior starter Riley Smith and junior Tyneil Hopper during fall camp. Smith had what you might call an off-year in 2021. Hopper seemed on the verge of a breakout that never fully materialized. Both can stretch the field if they get a chance. One of the pivotal plays of last season was the clinching 51-yard TD catch by Hopper at Colorado State, kicking off the Broncos’ four-game winning streak in late October and November. He averaged almost 19 yards a catch last year. My conclusion? Gotta get Tyneil Hopper the ball.

“When you put the No. 0 on your back, you better be sure you’ve got the skills to match the swag,” writes Pro Football Network. PFN has tabbed Boise State’s JL Skinner is the top prospect at safety in the 2023 NFL Draft. Dane Brugler of The Athletic has unveiled his latest positional rankings for the draft, and he has Skinner as the No. 3 safety behind Texas A&M’s Antonio Johnson and Alabama’s Brian Branch. “You can count the number of NFL safeties taller than 6-foot-4 on one hand,” notes Brugler. “Not only does he look good walking off the bus, but he can also run (mid-4.4 40-yard dash) and enjoys contact, two important qualities for the safety position.” Skinner has come a long way since wearing No. 33 and feeling his way through his true freshman year in 2019.

‘CAN BOISE STATE GET BACK?’

The “biggest storyline” in The Athletic’s Mountain West preview is, “Can Boise State get back?” The writeup is from respected Group of 5 writer Chris Vannini, so it carries weight. While Vannini picks the Broncos to win the Mountain Division, he writes, “This year’s team has some skill talent, but not much depth behind it—last year’s team was experienced—and the offensive line has been an issue for years.” As much as I like Vannini, I take issue with this. The depth at the skill positions is better this year, starting at running back. And the offensive line is about to take a major step forward. Vannini adds, “Coach Andy Avalos said the mindset and culture changed midway through last year and continued through the offseason. We’ll find out quickly how true that is.” I believe it to be true.

Funny how things have changed during the transfer portal era. B.J. Rains of Bronco Nation News notes that there are now three Boise State players who have entered the transfer portal since the team gathered for fall camp: Jacob Golden, Casey Kline and Jalen Richmond. That’s the most of any FBS school during the 2022-23 cycle, according to one portal tracker. So…trouble in River City? Not in this day and age. Golden, an offensive lineman, had extenuating circumstances after a DUI arrest in June. With Kline and Richmond, it was a depth chart thing. Kline, originally a linebacker, had been moved to tight end and wasn’t set to play much. He’s a senior, so his transfer is understandable. Richmond, a wide receiver, is only a redshirt freshman. Hopefully he won’t regret the move.

John Wustrow of the Idaho Press reports that College of Idaho coach Mike Moroski will go with a platoon system at quarterback, at least to begin the season Saturday at Simplot Stadium. Capital High grad Ryan Hibbs will start the first quarter of the opener against Montana State-Northern and Timberline High grad and Boise State transfer Andy Peters will play the second quarter. Hard to believe this is already season No. 9 since the Yotes brought back football. Moroski has been there for every one of them, going 38-33 and spanning the 2018 and 2019 seasons with a 17-game winning streak. C of I is lucky to have him.

TWO CUT DAYS DOWN, ONE BIG ONE TO GO

NFL cut day No. 2 has come and gone, with teams trimming rosters from 85 players to 80. At last check, all 16 Boise State products in NFL training camps have survived. The big cut day is the last one, with player counts going from 80 to 53. Khalil Shakir won’t be on that list, and we’re hoping Brett Rypien won’t be. Shakir has caught all eight of his targets over Buffalo’s two exhibition games covering 151 yards, and he leads the NFL in most explosive receptions (15+ yards) this preseason with six. Rypien’s second exhibition game was much better than his first, as he went 22-for-26 for 191 yards and a touchdown for Denver against the Bills. Broncos coach Nathaniel Hackett says Rypien will start Saturday and play the first half versus Minnesota.

There’s a story by Christopher Kamrani at TheAthletic.com that is recommended reading. Just carve out some time, because it is long. It’s headlined, “Jake Plummer wants to live forever.” Plummer, the Capital High grad who retired from the NFL 15 years ago at the age of 32, now runs a medicinal mushroom farm 40 miles north of Denver. Shoulder-length hair, purple toenails, brown flip-flops and all. He says his products can alleviate various maladies such as anxiety, allergies and digestion issues. They’ve also helped Plummer deal with residual pain from his 10 years as an NFL quarterback. “When I’m 100, I’m going to be walking around and jumping on trampolines and living my life,” said Plummer. “Why ever stop?” Just like he did when he was growing up on Hill Road.

A FAMED NAME UNDER THE RADAR IN EAGLE

Congratulations to Frank Solich. Ohio University has named its home field after the now-retired coach. It’ll now be Frank Solich Field at Peden Stadium. Why is that relevant locally? Solich has settled in Eagle, to be closer to his family and grandkids. He coached the Bobcats for 17 seasons and is the winningest coach in MAC history with 115 victories. The peak was a 10-win season in 2011, capped by Ohio’s first-ever bowl victory, a triumph over Utah State in the Famous Idaho Potato Bowl. Solich and the Bobcats won again on the blue turf in 2019. Including six seasons at Nebraska, he logged 173 career victories. Solich was famously fired by the Cornhuskers after a 9-3 season in 2003. Nebraska would give anything to be even close to that now.

YET ANOTHER MOVE BY EMMANUEL AKOT

Still trying to process the Emmanuel Akot news. The former Boise State standout, who entered the transfer portal after last season, has decommitted from Memphis and has opted for Western Kentucky after never setting foot on the court for the Tigers. The Broncos had Akot for three seasons after he transferred from Arizona. He averaged 10.6 points last season as he helped Boise State to the Mountain West championship and the NCAA Tournament. Sure, the Mountain West is a mid-major, but it’s a high-level mid-major. The Hilltoppers have hit the portal hard and should be very good next season. But I can’t help but think Akot is going to be toiling in anonymity in Conference USA. It was all sitting in front of Akot as a Bronco. There must be something we don’t know.

WHAT COULD HAVE BEEN AT HILLCREST

Philip Knowles could smell the trophy at the Albertsons Boise Open Sunday. Knowles was about to become the first wire-to-wire winner of the year on the Korn Ferry Tour and the first since 2018—and this was going to be in the first event of the Korn Ferry Finals. But he three-putted the 18th green, dropping him into a playoff with Will Gordon and MJ Daffue. Knowles then four-putted the first playoff hole, and Gordon won the 33rd edition of the event at Hillcrest Country Club. But there was a huge consolation prize. Knowles did indeed clinch the first PGA Tour card of his career. Not bad for a guy who started the season with conditional status on the Korn Ferry and zero guaranteed starts. Now Knowles has some guaranteed tee times when the new PGA Tour season begins next month.

Troy Merritt’s PGA Tour season is over after a tying for 58th last week at the BMW Championship, the second leg of the FedExCup Playoffs. Merritt is 62nd in the FedExCup standings—only the top 30 make the Tour Championship field this week in Atlanta. The former Boise State star earned more than $1.9 million, the second-best total of his career, with two top 5 finishes and seven top 25s. Elsewhere, the Boise Hawks’ Western Idaho Fair road trip continues with a six-game series at Idaho Falls. It started last night with a 5-1 win over the Chukars, giving the Hawks a rare two-game winning streak. It was one of Boise’s best pitching performances of the year, with three hurlers combining on a five-hitter. Still, the Hawks have the worst record in the Pioneer League at 25-54.

August 24, 2012, 10 years ago today: The grand opening of Dona Larsen Park, the new football home for Boise city high schools, Boise State track and field and Boise State softball. The Boise Braves christened the facility at the location of the old East Junior High School with a 38-24 win over the rival Borah Lions. Boise, Borah, Capital and Timberline were finally able to depart the increasingly cavernous Bronco Stadium after more than 40 years for the cozier confines of Dona Larsen. The site was also the home of the old Public School Field, where the city high schools and Boise Junior College once played their games. 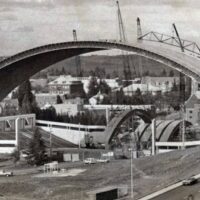 This Day In Sports: When the roof went on the Kibbie Dome

Will there be gravy this year for Octavius?