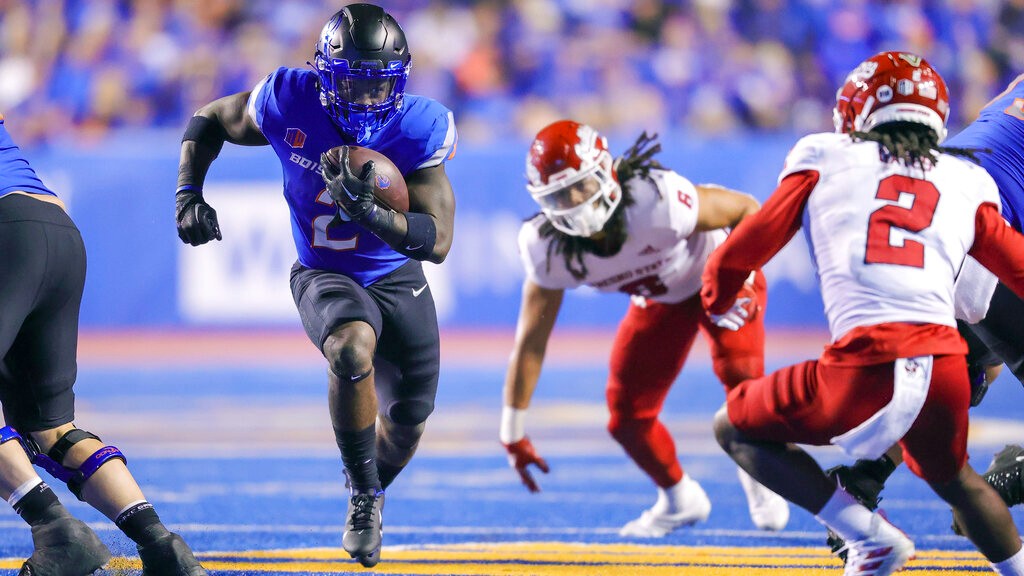 What in the world has gotten into the Boise State football team? The events of two weeks ago could have exposed a fractured locker room: an embarrassing loss, the firing of an offensive coordinator and the departure of the starting quarterback into the transfer portal. The Athletic’s Stewart Mandel wrote Monday, “Sometimes it’s just a matter of easing the pressure on everyone.” Mandel was talking about wins over the weekend by interim coaches at Nebraska, Wisconsin, Georgia Tech and Arizona State. But he could have applied that to the Broncos. A cloud dispersed, and they followed with exhilarating victories in two games that looked outright foreboding 17 days ago. If the culture was actually broken inside the Bleymaier Football Center—if the chemistry was blown up—this would have never happened.

Okay, at the midpoint of the 2022 season, Boise State officially has a two-headed rushing attack with George Holani and true freshman Ashton Jeanty. Holani carried 17 times for 157 against Fresno State—his 9.2 yards per carry was his best average since he gained 11.1 per tote at Utah State back in 2019. And Jeanty is everything everyone had hoped for going into the season. He logged his first 100-yard game versus the Bulldogs and scored two touchdowns, as his speed, vision and low center of gravity start to pay dividends. The last time Boise State had a one-two punch like this was in 2016 with Jeremy McNichols and true freshman Alexander Mattison. But carries for the Holani-Jeanty combo are more balanced. Having both of them fresh for Air Force after a bye week should be a bonus.

BIG PICTURE IN THE GROUND GAME

In the first four games of the season, Boise State rushed for just 481 yards, scored three rushing touchdowns, and averaged 3.3 yards per carry. And that includes Taylen Green’s 74-yard TD run at Oregon State. In the past two games—against Mountain West rivals, no less—the Broncos have rushed for 632 yards and seven scores, getting 6.6 yards per attempt. The transformation has been stunning. The best factoid out of this: for the first time in school history, Boise State produced two 100-yard rushers in back-to-back games, with Holani and Jeanty both in triple-digits against Fresno State. The Broncos hadn’t even had two games in an entire season with two 100-yard rushers since the undefeated 14-win team in 2009. The only other times it has happened was in 2007 and 1968.

Just two weeks ago following the infamous loss at UTEP, it was hard to name a Boise State player of the game within the team. Now, the Broncos have three of the four Mountain West weekly honors unveiled Monday by the conference. Zeke Noa got the nod on defense after a dominant performance that included his first career interception and a forced fumble, Jonah Dalmas was Special Teams Player of the Week with his four field goals (he’s connected on nine in a row), and Jeanty was Freshman of the Week.

Toward the end of the third quarter last Saturday night, the game was still in doubt, as Boise State had just retaken the lead on Fresno State, 27-20. Then Noa made the ultimate three-and-out defensive statement. It may have been bigger than Noa’s pick earlier in the game. The Bulldogs still had life. But on first down, Noa sacked Fresno State quarterback Logan Fife for an eight-yard loss.On second down, he sniffed out a swing pass from Fife to Erik Brooks and stopped it for no gain. The quarter ended, and on third down to start the fourth period, Noa stuffed Bulldogs star running back Jordan Mims out of the wildcat for a three-yard loss. That one possession accounted for three of Noa’s six tackles

Boise State’s Taylen Green was not the force against Fresno State that he was versus San Diego State, but the redshirt freshman sure learned a lot. Offensive coordinator Dirk Koetter had Green throw from the get-go Saturday night, and on his first snap he hit Stefan Cobbs for a 17-yard gain, and he capped that first drive with his first touchdown pass, a nine-yard strike to Billy Bowens. But Green also threw a bad interception later in the first quarter and took losses when he could have thrown the ball away. Man, those are teachable moments for Koetter. Green was 11-of-18 for 127 yards on the night. Bob Behler pointed this out on KTIK, though. On third down against the Bulldogs, Green was 6-of-9 for 62 yards and two touchdowns.

We interrupt this discussion of current Broncos to talk about Boise State alumni. What a day it was on Sunday. Both Khalil Shakir and Avery Williams scored their first NFL touchdowns—Shakir on a 24-yard pass from Josh Allen for Buffalo in a romp over Pittsburgh, and Williams on a eight-yard run for Atlanta in a loss to Tampa Bay. Without thinking, Shakir tossed the ball back to the ref. Fortunately, Allen retrieved it and gave it to Shakir for his trophy case. For Williams, it was his first rushing touchdown since high school. Not to be outdone, grizzled veteran DeMarcus Lawrence gave former Broncos a third TD on a 19-yard scoop-and-score for Dallas in a 22-10 win over the L.A. Rams.

It sure means something this year. Idaho and Montana will play for the Little Brown Stein Saturday in Missoula, and the winner will remain at the top of the Big Sky (though it won’t be alone). The Vandals and Grizzlies are 2-0 in conference, as are Sacramento State and Weber State. Montana State is 3-0. The Little Brown Stein hasn’t been an issue for a long time. Introduced to the rivalry in 1938, it’s been in Montana’s possession since 2000. This game was not played for 14 seasons, from 2004 to 2017, and the Grizzlies retained the trophy. The series resumed in 2018, and Montana has decisively won all three games since. It’ll be quite a scene at Washington Grizzly Stadium.

FINDING A WAY TO WIN

College of Idaho revived its football program in 2014 after a 37-season hiatus. Five years later, the Coyotes put together their best season in 66 years, going undefeated in the regular season and finishing 11-1 with a trip to the semifinals of the NAIA Playoffs. This season is feeling like that one after the Yotes rallied for a 27-24 win over Montana Tech last Saturday. They also had a 21-18 victory at Rocky Mountain last month. In 2019, C of I posted wins of 41-38, 16-14 and 24-17. The 16-14 contest was also against Montana Tech in Simplot Stadium, and it ended with a wind-aided 58-yard field goal by Kyle Mitchell. It takes games like that to win championships. The Yotes, now up to No. 7 in the NAIA Coaches Poll, has a bye week to map out the second half of their title quest.

HOTTEST HOOPS TICKET OF THE FALL

Tickets go on sale to the public today for the Capital City Classic between Boise State and Washington State on November 12 in Idaho Central Arena. We’ll see how long they last. Both teams are being hyped going into the season, with the Broncos coming off a school-record 27 wins and a Mountain West title, and the Cougars having made the NIT semifinals last spring. Boise State got by Wazzu 58-52 on a similarly neutral court in Spokane last December. Heck, WSU grads in local Boise TV alone could probably fill half the arena.

Between Albertsons Stadium and Idaho Central Arena last Saturday, almost 43,000 sports fans packed venues just a mile and a half apart. In downtown Boise, the rink was rockin’ as the Vegas Golden Knights pilfered the Arizona Coyotes 5-1 in the first NHL exhibition in 25 years in the facility. Now attention turns to the Idaho Steelheads, who opened training camp for their 25th season on Monday. The Steelies and Utah Grizzlies will engage in their traditional exhibition series this weekend—Friday night’s game will be in Boise and Saturday night’s contest will be in West Valley City.

MERRITT ON THE OTHER SIDE OF THE PACIFIC

Troy Merritt will be the first to hit off the No. 1 tee Thursday morning when the Zozo Championship begins in Chiba, Japan. That’s actually at 5:50 p.m. this evening Mountain time. Merritt doesn’t have much of a body of work yet in the 2022-23 PGA Tour season—the former Boise State star has played just two events. Merritt took a couple weeks off after tying for 59th at the Fortinet Championship in Napa, CA, last month. He missed the cut last week at the Shriners Children’s Open in Las Vegas.

This Day In Sports…brought to you by the CAPITAL CITY CLASSIC…tickets on sale now!

October 12, 2015: A bizarre day in college coaching circles. A day after placing coach Steve Sarkisian on indefinite leaving for showing up intoxicated at a team meeting, USC fires the second-year coach after new allegations arise. That came four days after Washington and former Boise State coach Chris Petersen had upset the Trojans in the L.A. Coliseum, 17-12. Petersen had replaced Sarkisian at UW the year before. And on the other side of the country, the other USC found out that 70-year-old coach Steve Spurrier was abruptly retiring. Spurrier won 228 games in 26 seasons as a college head coach at South Carolina, Florida and Duke, winning a national championship with the Gators in 1996.