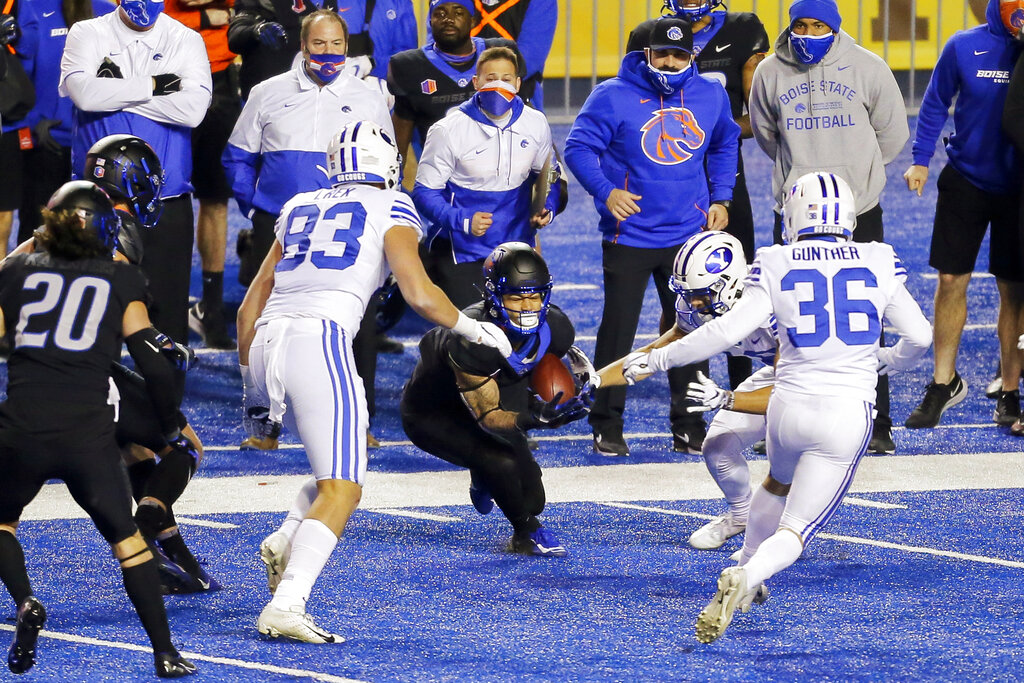 Boise State used to play lots of non-Saturday games in the WAC days. There were 34 of them in the regular season, most arranged that way to accommodate national TV. There were even four games on Wednesdays. But most of the time bye weeks helped soften the blow of quick turnarounds on either end. This is 2020, and for the first time in school history, the Broncos will play on back-to-back short weeks when they take on Colorado State Thursday night in Albertsons Stadium.

As many times as Bryan Harsin has played on weeknights—as a Boise State assistant from 2001-10 and as head coach since 2014—he doesn’t like it. “I’m a big believer in the consistency week-to-week,” Harsin said. One thing’s for sure: he’s not using last week’s short-week plan going into the BYU game as a blueprint. “We’ve got to make some adjustents in order to have a different outcome,” said Harsin.

TAKE IT AWAY, BRONCOS

One of the big subjects of the week around the Bleymaier Football Center is forcing turnovers. Through three games, Boise State has just one, and that one hardly counts (the interception by Tyric LeBeauf on the final play of the game versus Utah State). “We are not proud of that whatsoever,” said Harsin. The Broncos are pacing way behind 2019, and last year they had only 19 total—10 interceptions and nine fumble recoveries. Harsin zeroed in on the fumbles: “You create turnovers by great tackling, having multiple players around the ball.” On the interception side, there have already been some drops this season, including one against BYU that could have at least slowed the bleeding. Among FBS teams that have played three games or more, only Boise State and Nevada are sitting at one forced turnover.

THE RAMS TOOK IT AWAY

Let’s take a closer look at Colorado State’s first win of the season, the 34-24 victory in the Border War for the Bronze Boot last Thursday. CSU had 342 yards of total offense and the Cowboys 465. You know where I’m going with this. The Rams were the polar opposite of Boise State while playing their rivals. They intercepted Levi Williams once and recovered two fumbles while going turnover-free themselves. The first recovery led to a 29-yard touchdown pass from Patrick O’Brien to Trey McBride on the next play. That’s what a positive TO margin can do.

If this is any indication, there will be small dots of fans in Albertsons Stadium again for the Colorado State game. There was this from the Boise State Football Twitter account early Monday evening: “A limited number of student tickets are available for Thursday’s game! Enter by 8 AM tomorrow for your chance to be in attendance.” There have been no announced reports of any violations of the strict protocols laid out for the 1,000 or so people (including the Blue Thunder Marching Band and cheersquad) who were allowed to attend the BYU game.

DALLAS TRYING TO MAKE DO

Cedrick Wilson completed the second pass of his NFL career for Dallas Sunday. Kind of. Actually it was officially a lateral. And it came on a punt return. Wilson heaved it across the field to C.J. Goodwin, who bolted 83 yards and set up a second-quarter Cowboys field goal versus Pittsburgh. It was an interesting game as it pertained to Boise State alums. Offensive coordinator Kellen Moore got as much as he could out of emergency quarterback Garrett Gilbert and was lauded by Tony Romo on CBS for his play-calling. Leighton Vander Esch had six tackles but was called for a costly personal foul on a third down play in the fourth quarter. It was one of those “the guy who retaliates always gets caught” things. The Steelers went on to win 24-19.

ANOTHER SCHEDULE IN PENCIL

The Mountain West thought it had the basketball season figured out, until it didn’t. Nothing is for sure in 2020, and the conference has pivoted in the interest of safety and saving money. For this one historic season, it makes sense. The Mountain West schedule will now run 11 weeks instead of 10, with each school playing 20 league games, two against each team. The twist: the two games will be in the same venue, with one day off in between. So each squad will have five home series and five road series. (Will the Boise State men play its two games against San Diego State in ExtraMile Arena—or Viejas Arena?) This minimizes travel and the COVID spread opportunities that come with it. It’s more palatable than a bubble.

Despite being picked to win the Mountain West by Andy Katz of FOX Sports and Jeff Goodman of Stadium.com, the Boise State men are not bubbling under in the Preseason AP Poll. San Diego State, which was No. 6 in the final AP rankings in March, garnered six points in the “others receiving votes” category, and the Broncos had zero. But they have a chance to do something about it right off the bat in a couple weeks. Houston, which (as of now) is Boise State’s season-opening opponent, was ranked No. 17. Coach Leon Rice probably texted his good friend Mark Few Monday—Few’s Gonzaga Bulldogs are the preseason No. 1.

November 10, 2005, 15 years ago today: On the fourth anniversary of the night it started, Boise State’s 31-game WAC winning streak is snapped in a 27-7 loss at Fresno State on ESPN. The Broncos scored on their second play from scrimmage—a 67-yard run by Jeff Carpenter—but were stifled the rest of the way by the Bulldogs. Paul Pinegar’s 307 passing yards led Fresno State’s victory, its first conference win over BSU after four years of frustrating nationally-televised losses. The Broncos have lost to the Bulldogs only three times since. 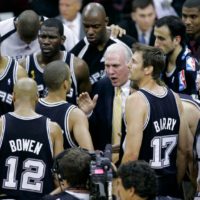