The one thing we know about 2020 is: you never know. Stadium’s Brett McMurphy tweeted Wednesday night that, according to sources, the Mountain West is “aggressively exploring” options to play an eight-game fall season, culminating with a December 19 conference championship game. The timeline would allow the Mountain West to be eligible for the Group of 5’s spot in the New Year’s Six Bowls. McMurphy notes that the league’s full season could include as few as eight teams, with Fresno State and Hawaii under difficult coronavirus restrictions and Air Force already committed to games against Navy and Army. There’s been a sense of urgency created with Wednesday’s announcement by the Big Ten that it has U-turned and will play an eight-game schedule beginning October 23-24.

Those rumblings came just hours after a statement from Mountain West commissioner Craig Thompson in response to the Big Ten move. The Cliff Notes version: the conference is working daily to facilitate a return to play as soon as possible, finalizing a plan for rapid coronavirus testing, and monitoring public health directives in member states. It was hard to imagine the Mountain West being ready to do anything before December, but now—if the rumors are true—late October is possible. A December start would mean a season that would cut right through the middle of winter. Boise is one thing, but Laramie, Logan, Fort Collins and Colorado Springs are something else (colder with a lot more snow). Mid-January through mid-April wouldn’t make that much of a difference, and it would be a lot more palatable in that scenario.

IT’LL BE AN INTERESTING RIDE

It is not fashionable to criticize the Big Ten’s decision, as so many Americans are so done with the virus that any move bringing more football back is hailed. But it ain’t going anywhere. Respected veteran writer Christine Brennan of USA Today penned a column headlined, “Big Ten’s decision to play football signals darkest day in conference’s sports history.” Brennan bemoans the daily rapid tests available for football teams—and not “for the elderly…or for school children and teachers…or for students paying for their education.” She also cited Michigan State, where “all MSU students were asked to self-quarantine” earlier this week. I hope the Big Ten’s plans (and those in the other leagues playing this fall) work out as much as the next guy, but it’s important to acknowledge that another sentiment is out there.

When Boise State athletic director Curt Apsey announced the unfortunate elimination of the baseball and women’s swimming and diving programs in early July (shocking in the case of baseball), he intimated that it probably wasn’t over. The department has axed what it says is another $1.8 million from its budget by “implementing furloughs and compensation reductions for all staff with an annual salary of more than $40,000.” Coaches and employees making more than $100,000 will face annualized salary decreases ranging from 8-15 percent, whereas furloughs for the remainder of affected staff will range from four weeks to 12 weeks. This is the other side of the COVID-19 coin—extremely painful.

The NCAA Division I Council has voted to start the college basketball season November 25, the day before Thanksgiving. That means, at this point, Boise State’s marquee start to the 2020-21 men’s season remains intact. The Broncos are part of the Orlando Invitational, which is set to begin Thanksgiving Day at Walt Disney World Resort. The field includes Gonzaga, Auburn, Michigan State, Xavier and mid-major power Belmont. The key to the NCAA’s plan: “By Thanksgiving week, 76 percent of all Division I schools will have either finished their fall semester completely or released the general student body for in-person instruction,” senior vice president of basketball Dan Gavitt said on a recent webinar.

IF MERRITT CAN SIP FROM THE WINE COUNTRY CUP…

Troy Merritt carries an unconventional kind of momentum into the U.S. Open this morning at Winged Foot. Merritt endured a sour day in California’s Napa Valley a week ago when he carded a three-over 75 in the first round of the Safeway Open. But the Boise State product improved by nine strokes last Friday, shooting a sparkling 66. He still missed the cut by two shots, though. If Merritt can bottle up that second round performance and do it two days in a row, he’ll play the weekend in a major for only the third time.

NEW SIGNAGE ON THE GROVE

With CenturyLink’s Downtown Boise footprint all but erased due to its exit from One Capital Center, it follows that the compnay’s title sponsorship on CenturyArena would end. The facility adjacent to the Grove Hotel and the home of the Idaho Steelheads will now be known as Idaho Central Arena in a partnership with Idaho Central Credit Union. The name differentiates it from ICCU Arena, the new facility at the University of Idaho for which Idaho Central Credit Union also carries the naming rights. This will be the fourth name attached to the downtown building. It opened 23 years ago as the Bank of America Centre before becoming Qwest Arena.

September 17, 1955, 65 years ago today: Hawaii shocks Nebraska 6-0 in Lincoln to avenge a 50-0 humiliation in Honolulu the prior season. The Rainbow Warriors’ 29-man team outgained the Cornhuskers’ offense, 318 yards to 219. With the game still scoreless and five minutes remaining in the fourth quarter, Hawaii halfback Bill Taylor ran 37 yards to the Nebraska 7-yard line. From there, fullback Hartwell Frietas powered into the end zone for the only score of the game. 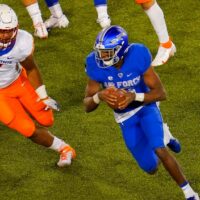