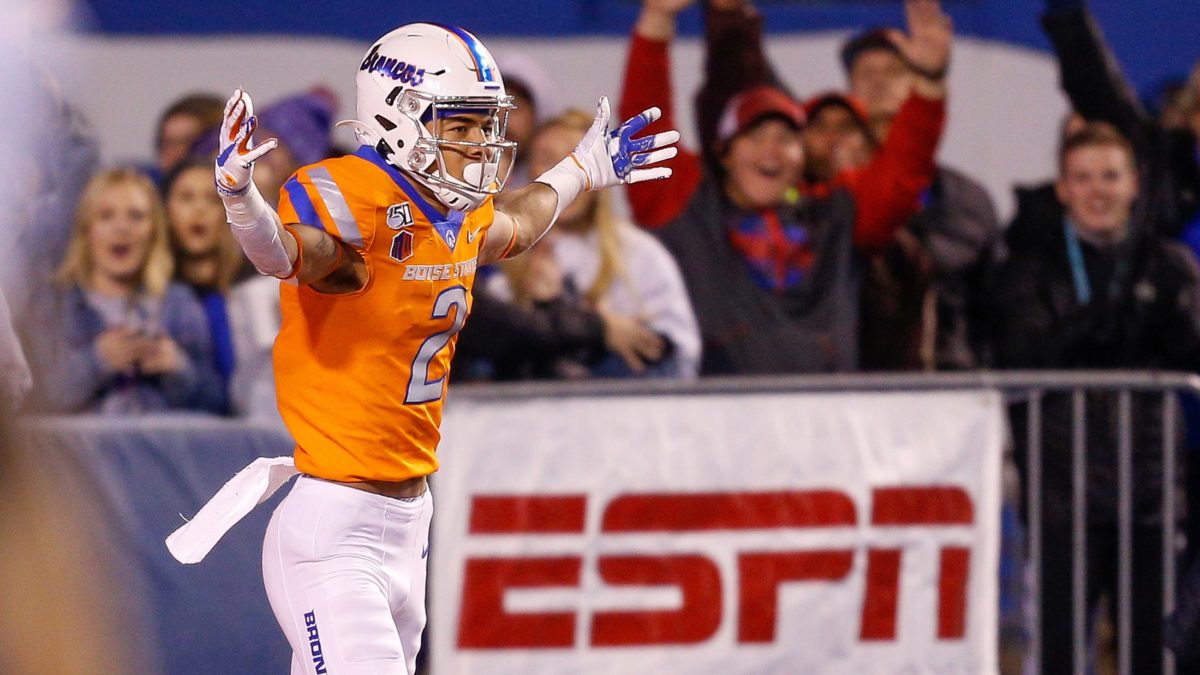 It’s hard to stomach the fact that the Boise State careers of guys like Khalil Shakir, Riley Whimpey and Kekaula Kaniho are done. Nevertheless, we shut the book now on their career stats. Shakir finished with 208 catches for 2,878 yards and 20 touchdowns while rushing 71 times for 414 yards and four TDs. Think about it—122 yards away from 3,000 receiving for his career. It could have happened in the Arizona Bowl. Whimpey registered 287 career tackles, 21.5 of them for loss, with six sacks and two fumble recoveries.

Kaniho put up 217 tackles, 28.5 of them for loss, with five sacks, six interceptions and three fumble recoveries. I’ll never forget how he finished his true freshman season: with a pick-six of Justin Herbert the last time Boise State won a bowl game, in 2017 against Oregon at the Las Vegas Bowl. And a tip of the cap to the toe of Joel Velazquez. In five seasons, Velazquez punted 153 times for a 40.9-yard average and kicked off 330 times, with 197 going for touchbacks.

Daniel Cantrell is going to pass on the opportunity for a super-senior season at Boise State and declare for the NFL Draft. Cantrell’s draft hopes might sound strange for a long-snapper, but good ones are hard to find. Did you know? There has been a long-snapper selected in each of the past seven drafts, one as high as the fifth round. Cantrell, the Bishop Kelly grad, has been a rock at a crucial spot on special teams the past three seasons, and he even got 13 tackles in. Boise State had well-documented problems this year with center snaps—but not the ones that came from Cantrell.

Central Michigan’s switch to the Sun Bowl on New Year’s Eve has created a whole new set of sidebars. Instead of CMU coach Jim McElwain’s history against Boise State and defensive coordinator Robb Akey’s mostly-fun ride at Idaho (his record versus the Broncos notwithstanding), now it’s all about their ties to Washington State and the Inland Empire. McElwain was a quarterback at Eastern Washington 40 years ago and kept an envious eye on big brother in Pullman. Akey was hired as head coach at Idaho in 2007 after a successful eight-year run as defensive coordinator for the Cougs. He spent six more years on the Palouse with the Vandals. McElwain and Akey should be a pair of inspired individuals.

It is not lost on Bronco Nation that New Year’s Day marks the 15th anniversary of Boise State’s 2007 Fiesta Bowl win over Oklahoma. To this day, ‘Circus’ and ‘Statue Left’ are viral. And look who’s in this season’s Fiesta Bowl. It’s Oklahoma State, which escaped by a whistle—literally—when it visited the blue turf in September. Now the Cowboys take on Notre Dame in Glendale, with an eye on a 12-win season. The Sooners’ bitter rival would love to celebrate this anniversary with the Broncos. Oklahoma State is a 2.5-point underdog to the Irish.

It must be fun getting to Laramie, where it’ll be minus-6 on New Year’s Eve and 11 on New Year’s Day. And “breezy.” It’ll be equally fun playing Wyoming that day in the Arena Auditorium. Boise State, 10-4, takes a seven-game winning streak up there Saturday, and the Cowboys, 11-2, are rolling under former Broncos assistant Jeff Linder. It’s hard to know what to make of the Pokes, who started 8-0 but didn’t play a particularl tough schedule. Their losses are by three points to Stanford in the Diamond Head Classic last week and by 31 at Arizona. Wyo’s rankings are all over the board, from No. 32 in the NCAA’s NET ratings all the way down to No. 90 at KenPom. Boise State is No. 61 in NCAA NET and No. 50 at KenPom.

TAKE CARE OF THE BALL

Boise State has climbed to 16th in the country in scoring defense after allowing just 55 points to Fresno State. Through all of the defensive kudos—and they are well-deserved—there’s one phase of the game that could get Boise State in Laramie. It is turnovers, which numbered 15 in Tuesday night’s win over Fresno State. Abu Kigab and Emmanuel Akot had four turnovers apiece against the Bulldogs. The Broncos are third-to-last in the Mountain West in taking care off the ball, averaging 13.4 turnovers per game. They’re second-to-last in assist-to-turnover ratio.

STEELHEADS’ JURUSIK JUMPS BACK TO THE AHL

The Idaho Steelheads end an 11-day holiday break, the longest in the ECHL, on New Year’s Eve by opening a three-game series in Texas against the Allen Americans. Steelheads goaltender Matt Jurusik has been in demand at higher levels this season, and after this roadtrip, he’ll be back in the AHL. Jurusik, who was called up to Wilkes-Barre/Scranton earlier this month, now has his first full AHL contract with the Texas Stars. He’s coming off back-to-back shutouts with the Steelies and is second in the ECHL in both goals-against average and save percentage.

December 30, 1978: Ohio State fires the most famous football coach in school history (sorry, Urban Meyer). The Buckeyes were left with little choice after Woody Hayes punched a Clemson player, Charlie Bauman, after he had intercepted a pass during OSU’s 17-15 loss in the Gator Bowl the previous day. Hayes started coaching Ohio State in 1951 and won 238 games with the team. He led the Buckeyes to 13 Big Ten titles and five national championships. But his reputation as a man with a bad temper caught up with him.