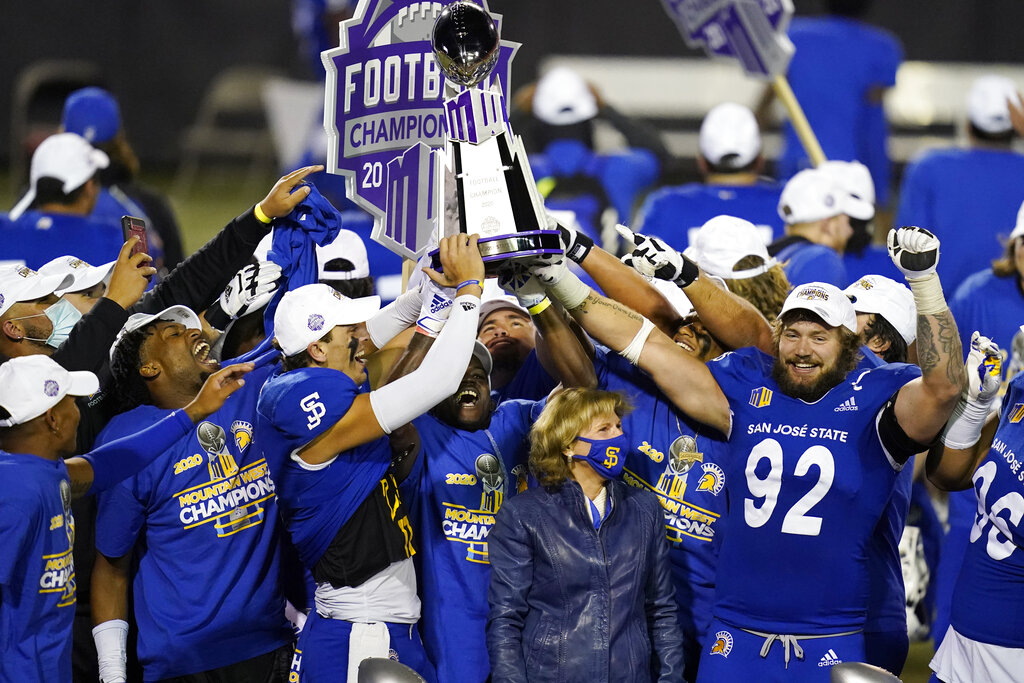 It wasn’t that close. Were it not for four red zone defensive stands, the leg of Jonah Dalmas, and the legs of Avery Williams, there’s no telling what the 34-20 score would have morphed into in the Mountain West championship game Saturday. From Nick Starkel to Tre Walker to Cade Hall, San Jose State had it going. Face it, the Spartans were meant to make history. If Boise State had been able to play George Holani, John Bates, Demitri Washington and Sam Whitney, I’m not sure the result would have been different. This game meant everything to San Jose State, and its story has become one of the best in sports in 2020. The Spartans had to move fall camp more than 300 miles to the north, were booted out again late this season by Santa Clara County, and finished with an emotional home win in Las Vegas. Props to them.

I mentioned several weeks ago that the 2020 season would affect how we look at streaks. The asterisk is real now after Boise State opted out of a bowl game on Sunday. Who can blame the Broncos? Only they know what a burden this season was for them and how it drained their psyches. Therefore, I think the Broncos can legitimately look at their streaks as still alive, as in 18 straight bowl berths in “non-COVID seasons.” Same goes for Boise State’s streaks of 11 straight years with 1,000-yard rushers and four consecutive 10-win seasons. And any program in the country with similar accomplishments should be able to do the same. The term “non-COVID seasons” will become a thing.

San Jose State handed Boise State its hat in so many ways Saturday. The Spartans limited the Broncos to 12 yards on the ground, their fifth-worst rushing output in school history and the worst in the 25 seasons of the FBS era. It’s easy to point to Andrew Van Buren, who managed just 26 yards on 11 carries. But the Boise State offensive line had one of its worst days in recent memory. Quarterback Hank Bachmeier was another inheritor of the O-line’s difficult day. Not sure where the stat came from, but Jeff Cavender said on the KBOI/KTIK postgame show that Bachmeier was hit 14 times and hurried 17 times during the game. Meanwhile, the Broncos secondary was a curiosity. Starkel threw for a mind-numbing 453 yards despite the fact that all five Boise State starters were in the lineup.

Boise State has had some exciting kick returners over the years: Rick Woods, Chris Carr, Quinton Jones, Kyle Wilson, etc. But Avery Williams is the all-timer. And officially so in the record books, as his touchdown on a 69-yard punt return against San Jose State tied the FBS career record of nine kick return TDs held by Washington’s Dante Pettis. Williams has been like this since the first touch of his college career in 2017, but this was his best season yet. He has mixed it up, with six scores on punt returns and three on kickoffs. All nine of Pettis’ touchdowns came on punt returns, one of them on the blue turf in 2015. Ironically, both Williams and Pettis are graduates of Serra Catholic High in San Juan Capistrano, CA.

Sunday was the 40th anniversary of Boise State’s Division I-AA national championship in 1980, capped by the 31-29 win over Eastern Kentucky in Sacramento. There was a Zoom call Sunday among the players on that team. The champs invited Paul J. Schneider and me to join them. Very cool. A lot of stories were relived, and the ABC video of the final drive that won the title game was shown. Interesting to me was a consensus that the 1979 team was better than the ’80 squad (the ’79 team went 10-1 but was ineligible for the postseason due to an illegal scouting incident in late 1978). “We would have won two national championships,” said one player. The Zoom call’s moderator (I use that term loosely) was the inimitable Joe Aliotti, who quarterbacked the Broncos both seasons.

You could say that Nevada quarterback Carson Strong and wide receiver Romeo Doubs would be worth the price of admission Tuesday in the Famous Idaho Potato Bowl. But there’s no admission. At any rate, the Wolf Pack duo has been phenomenal this year and could light up the blue turf against Tulane. Strong is the Mountain West Offensive Player of the Year. He’s third in the nation with 28.4 completions per game and sixth with 323.4 passing yards per game. Strong is also top 10 in total passing yards and touchdown passes. Doubs has helped. He’s 40 yards away from a 1,000-yard season (in just eight games) and leads the Mountain West in receiving yards per game (by far) at 120 yards per. There’s a dynamic duo for you.

Boise State men’s basketball gets its first taste of the Mountain West’s scheduling experiment tonight when the Broncos host New Mexico in an empty ExtraMile Arena. They’ll play (or are scheduled to play) a two-game series against the Lobos, with the second one on Wednesday. No one knows much about New Mexico, which had to move preseason practices to a small town in west Texas. UNM opened with a 72-61 win at Rice and then posted a couple victories over non-Division I teams. The Lobos are out-rebounding opponents by a whopping 31 boards per game, the most in the nation, and are pulling down 21.7 offensive rebounds per game. We’ll find out tonight how reasonable those stats are.

This is what we know about Boise State, though. Using BYU as a barometer, the Broncos are pretty good. After Boise State beat the Cougars 74-70 in Provo, BYU went up to Salt Lake City and drilled Utah 82-64. Then the Cougars visited Viejas Arena on Friday and dropped No. 18 San Diego State, the heavy preseason favorite in the Mountain West, 72-62. BYU led 35-20 at the half, but the Aztecs came back to tie it with two minutes left. Then the Cougars drained a huge three-pointer and went 6-for-6 at the free throw line during the final 34 seconds. The big footnote for the Broncos: they’ve done it so far without Arizona transfer Devonaire Doutrive. He could…maybe…perhaps…make his debut tonight.

December 21, 2000, 20 years ago today: UNLV upsets Arkansas in the Las Vegas Bowl, 31-14, in a battle between Rebels coach John Robinson and Razorbacks coach Houston Nutt, the former Boise State head man. UNLV surprisingly outrushed Arkansas by 187 yards as the Rebels won their hometown bowl game for the second time. UNLV has been to only one bowl game since, though.