To Air Force, the formula against Boise State is pretty simple tomorrow night. “Stop the run, make them one-dimensional, make them throw the ball,” Falcons linebacker Kyle Floyd said. Stopping the pass will be difficult if Brett Rypien’s hot hand continues, but Air Force has a shot if it can bottle up the Bronco running game. Yes, the cadets watched film of the loss to San Diego State. And the season-long concerns over the Broncos’ ground game have not abated. Outside of a 29-yard reverse by CT Thomas, Boise State’s longest rushing play against Colorado State last week was 15 yards. So how does Air Force do against the run? The Falcons allow just 107 yards per game—second in the Mountain West and 13th in the country—and 3.3 yards per carry.

You wonder if sooner or later, the Broncos’ Alexander Mattison might break out. Mattison averaged 4.3 yards per carry versus CSU, his best number outside of the pinball stats he (and everybody else) posted in the UConn game. Mattison runs really hard. With his dreads flying out of the back of his helmet, he looks like Jay Ajayi sometimes. But Mattison also gets hit really hard, and his numbers don’t look like Ajayi’s. The junior from San Bernardino, CA, has rushed for 501 yards this season and 3.9 yards per carry. He’s halfway to 1,000 with less than half the season to go. But—glass half-full—there’s almost half the season to go.

Air Force fans have a special bond with players with the service academy spectre in play. But it goes beyond that with quarterback Isaiah Sanders. The Falcons draw cadets from all over the country, so it’s unusual to have a hometown product in a starring role. Sanders is a graduate of Palmer Ridge High in Colorado Springs and is the only local player on the roster (there are several from the Denver area). He’s filling in as a starter while Donald Hammond III recovers from an ankle injury, but it’s going to be hard to extract Sanders from that spot when Hammond returns. Sanders threw for 217 yards and rushed for 173 yards in last week’s win at UNLV. He could be a handful for Boise State.

Sanders threw a career-long 69-yard touchdown pass to Ronald Cleveland last week. But by the end of the game, Cleveland was on crutches on the sidelines with an undisclosed leg injury and won’t be available against the Broncos. Cleveland is the Falcons’ active leader in career rushing yards, so those will be big shoes to fill for his replacement, Andrew Smith, a player who sounds like a Boise State kinda guy. Smith is just 5-8, 170 pounds. “Whenever I tell them I play college football, they think I’m a kicker or punter or walk-on or something like that,” Smith said. “You can’t judge the heart, I guess.” You also can’t tell on the surface that Smith has 4.5 speed in the 40-yard dash. Watch for No. 10 in blue tomorrow.

Utah State, already off to its best start in 44 years, stands a very strong chance of extending its winning streak to seven games when the Aggies host New Mexico tomorrow afternoon. USU, a 20½-point favorite, is fourth in the nation in scoring at 47.7 points per game. And the way Hawaii is returning to earth these days, not even the Rainbow Warriors might be able to get in USU’s way before its Thanksgiving weekend showdown on the blue turf. In the West Division of the Mountain West, Fresno State gets Hawaii at home tomorrow night. Little-known fact: the Bulldogs do not yet have a victory against an FBS team with a winning record this season. That will likely change tomorrow. UH is going to have all sorts of problems with that ‘Dogs defense.

Idaho will need all its machinery oiled to stay with Eastern Washington tomorrow in Cheney, but there are good signs for the Vandals’ running game as they try to even their Big Sky record at 3-3. True freshman Tyrese Walker had a breakout game in the win over Southern Utah last week, running for a career-high 107 yards on 12 carries for the first 100-yard game of his career. The old standby, Isaiah Saunders, rushed 25 times for 92 yards and a touchdown versus the Thunderbirds. Saunders is now 98 yards away from 2,000 for his career. EWU is coming out of a bye week, and its offense is lethal, although it was held to six points by Weber State two weeks ago after rolling up a combined 159 points in its previous three games.

With all those home-and-home arrangements in the Frontier Conference, College of Idaho doesn’t have to wait a year to avenge losses like the one back on August 25 at Eastern Oregon. The Mountaineers will be at Simplot Stadium tomorrow for the Yotes’ home finale. C of I is different now, and the Coyotes’ receivers should not go unnoticed. Hunter Juarez caught three passes for a whopping 131 yards last week in the upset of Southern Oregon, including a 78-yard touchdown grab. A 28-yard score by Connor Richardson marked his fourth straight game with a TD catch, joining the legendary R.C. Owens as the only C of I players in history to achieve that feat. And there was Keegan Crafton’s 28-yard touchdown reception on a fourth-and-four play. It’s turned into a well-rounded group.

The Idaho Steelheads begin a six-game road trip at Utah tonight, their second-longest road swing of the season. The Steelheads are the only team in the ECHL with all their games so far decided by one goal. Elsewhere, former Steelhead Justin Dowling was called up to the Dallas Stars from Texas of the AHL on Monday and made his season debut Tuesday night, playing his first NHL game in almost two years. Dowling recorded an assist in the Stars’ 4-2 win over the L.A. Kings. Dowling put up 13 goals and 33 assists with the Steelies in 2012-13.

The Boise State men are favored and the Bronco women will contend when the Mountain West Cross Country Championships unfold today at San Diego’s Balboa Park. The Boise State women are No. 2 in the country; 10-time defending MW champion New Mexico is No. 3. The Bronco men are ranked No. 8. in the nation. Also, Boise State women’s soccer hosts Utah State for Senior Day this afternoon, with a lot on the line at the Boas Complex. A win or a tie will give the Broncos the outright title and guarantee them a No. 1 seed in next week’s Mountain West Championships. Also, if national scoring leader Raimee Sherle scores one more goal and gets to 20, today or in the conference tournament, she would be just the sixth player since the 2015 season to score 20 or more goals in NCAA women’s soccer.

This Day In Sports…brought to you by COVER TECH OF IDAHO…extend the seasons of your Idaho life!

October 26, 1985: Perhaps the biggest upset in the history of WAC football, as UTEP’s only win of the year comes against defending national champion BYU, a 35-point favorite heading into the game. The Miners went with an unusual defensive scheme, using only two down lineman, to hold Cougars quarterback Robbie Bosco to 151 yards passing and four interceptions. UTEP’s 23-16 victory snapped BYU’s 25-game WAC winning streak and was only the Miners’ 14th win in an 11-season span. 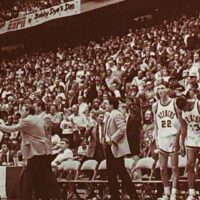 Off-beat rankings on an offseason Monday