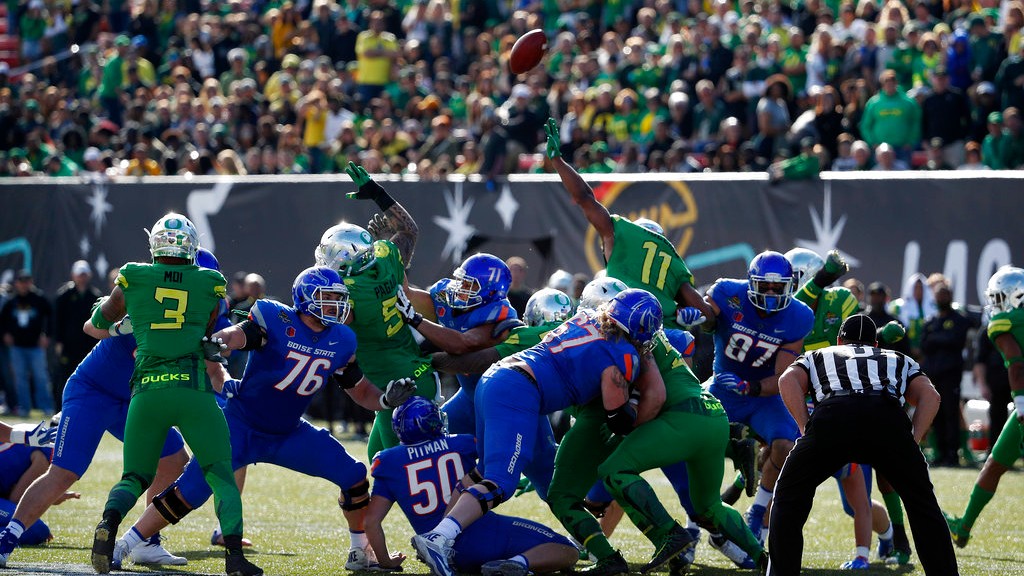 They’re the grizzled old leaders in Boise State’s fall camp, and they’ll all probably play a key role in the Broncos’ 2021 season. They’re the seven “super seniors” who should have run out of eligibility at the end of last year but chose to stay for the extra year granted by the NCAA due to COVID. Two of them were impact true freshmen way back in 2017, finishing the season playing pivotal parts in the Las Vegas Bowl win over Oregon. CT Thomas made two receptions for 31 yards, including a 22-yard catch on a third-and-nine from the Boise State 15-yard line in the fourth quarter, helping to salt the game away. And Kekaula Kaniho had the 53-yard pick-six off Justin Herbert. The victory over the Ducks was really the last crown-jewel moment for a Boise State program that is looking for some super-senior mojo.

THE ‘M’ WORD ABOVE THE BLUE

My Scott Slant column on Friday caused some consternation when I wondered aloud how Boise State was going to be able to sell out six home games without masks, considering the way things were going with the Delta variant. I thought it was a real concern. Turns out it is. Effective today, the university is reinstating “facial covering requirements for indoor spaces and crowded outdoor spaces.” Nothing’s more crowded than Albertsons Stadium with 36,000 people in it. The UTEP game is less than a month away. If it was played today, masks would be required. It would be a small price to play.

Mountain West football fans need to appreciate the Jimmy Kimmel L.A. Bowl. Hey, it’s on ABC. One of the conference’s other postseason tie-ins is the Arizona Bowl, where it’s slated to meet a team from the MAC. That makes viewership a challenge in itself, although 1.77 million tuned in to last year’s game on CBS, a Ball State win over San Jose State. Now the Arizona Bowl is rolling the dice, as it will not broadcast on over-the-air or cable TV this year. The December 31 contest will be streamed by Barstool Sports, the edgy digital sports platform. “This is something I think the college football world is ready for,” Arizona Bowl executive director Kym Adair said. I’m skeptical. People will watch bowl games that are spoon-fed to them. Outside of fan bases, family and friends, they’re unlikely to seek out the Arizona Bowl.

Justinian Jessup finally found his three-point touch again Wednesday night in the NBA’s Las Vegas Summer League. The former Boise State star was 3-for-5 from deep and 5-for-10 overall, scoring 13 points in Golden State’s 90-84 win over Toronto. But Anthony Slater, who covers the Warriors for The Athletic, felt Jessup was behind the 8-ball in his quest to make the team following his first two games of summer league. Wrote Slater: “After the Warriors used their two lottery picks (in June), it became a longshot for Jessup to make a roster that needed more proven veterans. There was always the chance he’d light up summer league and shoot his way into an NBA paycheck, but that hasn’t happened. The Warriors will still retain his draft rights if he goes back to Australia. That seems to be where this is heading.”

Slater analyzed much of Golden State’s summer league roster, but he did not mention Derrick Alston Jr. If Jessup’s position is precarious, Alston’s must be, too. While Jessup started for the Warriors and played 26 minutes, Alston was in for just 15 minutes. He scored six points, going 2-for-6 from beyond the arc. Alston did pull down five rebounds, though.

LOCAL FLAVOR ON THE HILL

ERAs in the Pioneer League are typically high. It’s tough to find good pitching in independent baseball. So trust me when I say that local products Matt Dallas and Zach Penrod, with ERAs of 4.43 and 5.48, respectively, are two of the Boise Hawks’ best hurlers. Dallas, the Capital High grad, is 7-3 and leads the Northwest League with 83 strikeouts. Wednesday night it was Penrod’s turn as the Hawks returned to Memorial Stadium to open a six-game series against Idaho Falls. The former NNU pitcher and Nampa native went seven innings, allowing four hits and three runs and striking out eight in a 7-3 win over the Chukars. Penrod improved to 3-2 on the season.

MORE FROM THE PRO SPORTS FRONT

KTVB’s Jay Tust has been on the Michael Stefanic bandwagon ever since the L.A. Angels promoted him to the Triple-A Salt Lake Bees. We all should be, as there has never been a native Boisean to make the majors as a position player. Stefanic, a Timberline High grad, homered for the second straight game Tuesday night at Las Vegas. It was his fourth homer in seven games and his 11th in 59 games at Triple-A this season. Stefanic is also batting .332. Those are call-up worthy numbers.

There’s yet another returnee on the Idaho Steelheads 2021-22 roster. Defenseman Evan Wardley has been signed by the Steelheads for the upcoming season after playing 24 games for the ECHL’s Wheeling Nailers last winter while the Steelies were shut down due to COVID. “I’m excited, especially to be in Boise for a full season,” said Wardley. The 27-year-old made his pro debut with the Steelheads during the pandemic-shortened 2019-20 season, appearing in nine games before it came to an end.

August 12, 2016, five years ago today: Alex Rodriguez plays the final game of his checkered 22-season major league career, contributing an RBI double in the New York Yankees’ 6-3 win over Tampa Bay. A-Rod hit 696 career home runs, the fourth-most in history, but he was also a symbol of baseball’s Steroid Era. Rodriguez was suspended by Major League Baseball for the entire 2014 season for his involvement in the Biogenesis performance-enhancing drugs scandal. He returned with a solid season in 2015, but he faded in his final year, and his playing time had dwindled to almost nothing at the end. 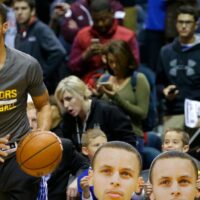 This Day In Sports: The Dubs’ historic streak of dubs