NFL Network is counting down the top 100 players of 2018, and former Boise State star DeMarcus Lawrence of Dallas checks in at No. 34.The unique way NFL Network presents it is cool—since players vote for the rankings, they’re the ones who do the narrative on each guy. No better praise than some from the defensive end who edged Lawrence for the NFL sack title last year, Chandler Jones of the Arizona Cardinals. “As hard as it is not to look at who’s leading the league in sacks,” said Jones, “I was peeking. I was. DeMarcus has that double-swipe dip move, and he gets low.” Added L.A. Rams tackle Andrew Whitworth, “He’s a guy who has a lot of ability (yet) you can tell there’s a plan to it.”

Lawrence’s favorite moment of last season? “I’d say my sack against Russell Wilson,” he said. It came in the Cowboys’ 21-12 loss in Jerry’s World in Dallas. It was a classic. “I did a power rush,” said Lawrence. “ He got outside the pocket. I made him stop in his tracks, because it would have been a sack. I stayed on his uphill shoulder, and he tried to spin again. He was hit.” Twenty-two backward yards later, Wilson was sprawled on the turf at Jerry’s World. Lawrence is back at Dallas OTAs this week after spending the weekend working Alex Guerrero’s Gridiron Dream Football Academy in Boise.

Elsewhere at Cowboys drills, writer Brian Broaddus of Dallas Cowboys.com was asked, “Who’s been your biggest OTA surprise on offense?” Answer: “Cedrick Wilson.” That wasn’t just a one-off compliment. The team likes his 6-3 height, his wingspan, his vertical leaping ability, and his football IQ. “Ced has picked up the offense better than most of the guys in the room,” said Dallas wide receivers coach Sanjay Lal in a podcast. “And now it’s becoming like, ‘Okay, we need a guy to run in there? Ced, go in’, and he knows what to do. (The other day) he scored a touchdown, so he’s coming along. I’m very happy with it.” Wilson is essentially one of eight wide receivers competing for three available spots on the Cowboys roster. There are many who like his chances.

Colorado State has a name for its new stadium. Now the pressure is on the Rams to win in it. The university announced in April that naming rights for the $220 million facility had been sold to Public Service Credit Union. That was clunky, but it was understood that the company was in the middle of rebranding. It is now Canvas Credit Union, and the Rams will now play in Canvas Stadium. The contract was for 15 years and $37.7 million. Remember the headline? “CSU just got 5 times more for its naming rights than Boise State,” bugled the Coloradoan after the deal was struck. “In addition to a $20 million anonymous donation to keep the name ‘Sonny Lubick Field’ attached to the stadium, the Rams have secured nearly $60 million in naming rights at the stadium.” The Albertsons Stadium deal is $12.5 million for 15 years.

With Johnny Manzel getting all that pub for playing in a Canadian Football League exhibition game (for the Hamilton Tiger-Cats and coach June Jones), it reminded me we should check for local ties in the CFL. There are 20 Boise State alums on current NFL rosters. But three ex-Broncos are still toiling in the CFL, defensive backs Brandyn Thompson and Mercy Maston in Edmonton and offensive lineman Jon Gott in Ottawa. Former Boise State star Ryan Dinwiddie remains the quarterbacks coach for the Calgary Stampeders.

There’s quite a congregation of former Idaho Vandals up north. Running back Rolly Lumbala and defensive lineman Maxx Forde are with the B.C. Lions, defensive backs Chris Edwards and Arron Grymes are in Edmonton and offensive lineman Jordan Rose is with Ottawa. Lumbala, now 32, is one of the longest-tenured players in B.C. history. He has played 10 seasons and has appeared in 171 games.

The Boise State women’s softball program is poised to feature its first bonafide local star. Bradie Fillmore, the two-time Idaho Gatorade Player of the Year who led Eagle High to a 30-0 record and a No. 1 national ranking in 2016, is transferring to her home school after two seasons at Cal. For some reason, transfers aren’t required to sit out a year in softball, so Fillmore will be an active Bronco immediately. That means more momentum for a team coming off its first Mountain West championship and NCAA Tournament appearance. Fillmore started all 55 games for the Bears this season and batted .272 with five home runs and 30 RBIs. She spent most of her time in rightfield in Berkeley but can also play the infield and pitch.

The annual Mountain West Board of Directors meeting is complete, and it’s all hands on deck for hoops. The board spent a lot of time at the Sonoma, CA, gathering discussing men’s basketball, which has seen its NCAA Tournament berths dwindle to one in recent years (this March notwithstanding). “Continued improvement in non-conference schedules and participation in multi-team events that feature national-caliber opponents will remain strategic elements,” said the Mountain West press release. That means prestigious early-season tournaments, which are really the only way MW schools can face marquee (read that: high-RPI) opponents without traveling to power schools’ home courts.

American Pharoah becomes the first horse to win the Triple Crown in 37 years when he romps to a 5½-length victory in the Belmont Stakes. American Pharoah and jockey Victor Espinoza led the grueling 1½-mile race wire to wire to end the longest Triple Crown drought in the sport’s history. The last horse to win horse racing’s fabled trilogy was Affirmed in 1978. Since then, 13 horses had won the Kentucky Derby and Preakness Stakes only to fall short in the Belmont. Idaho native Gary Stevens, who rode Tale of Verve to a seventh-place finish at Belmont Park, was runnerup to American Pharoah aboard Firing Line at the Derby. 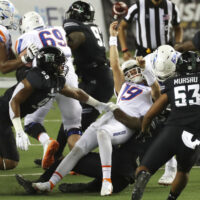