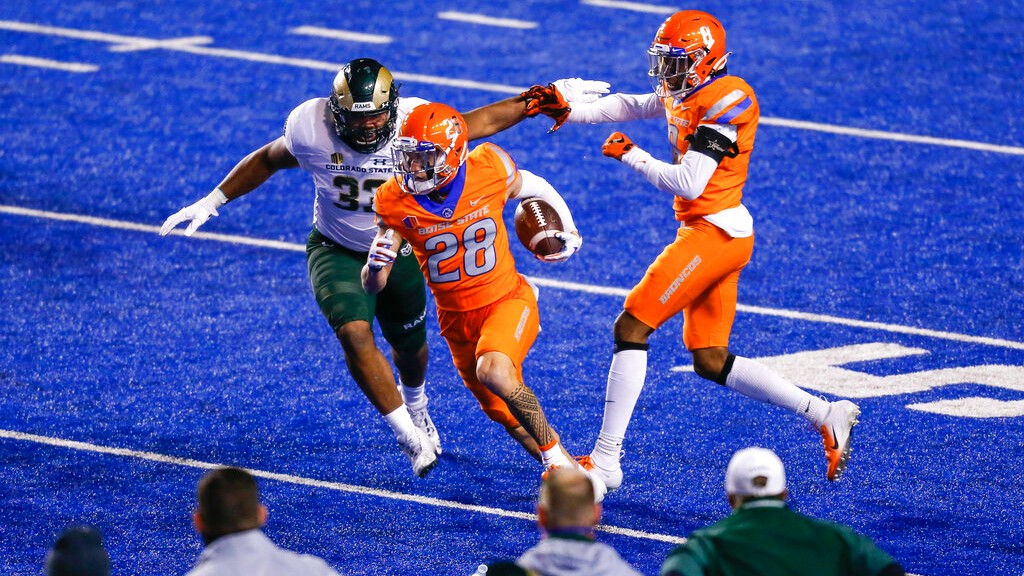 Everywhere you look these days, senior nickel Kekaula Kaniho is representing Boise State—and representing well. At the beginning of the week, Kaniho was named to the All-District 7 Academic Team for the second straight year. And a couple days ago, Watch List Season kicked off with Kaniho as a candidate for Lott IMPACT Trophy, again for the second consecutive year. That honor goes to to the defensive player who best exemplifies the Lott award’s IMPACT acronym: integrity, maturity, performance, academics, community, and tenacity. There’s a reason that Kaniho’s nominations and awards have to do with character. In 2020, he was the winner of the Senior CLASS Award as college football’s top student athlete. This Hawaiian has become pretty important to the state of Idaho.

AT LEAST WE’VE HEARD OF HIM

The Mountain West’s new bowl destination for its champion now has a title sponsor. It’s a late-night talk show host. Yes, the “Jimmy Kimmel LA Bowl” will make its debut on ABC on Saturday, December 18, at SoFi Stadium. It’s a multi-year deal. As gimmicky as it sounds, it comes with some side benefits. There will be nightly hype on Kimmel’s show leading up to the ABC telecast (he’ll have to get the coaches on, won’t he?). And there’s this: according to his press release, Kimmel will work with community partners One For All, Boys and Girls Club LA Harbor and Boys and Girls Club LA Metro, along with other Los Angeles charities. The initial cringe fades a bit when you realize it’s a lot better than the old Poulan Weed Eater Independence Bowl.

Like Avery Williams, former Boise State standout and Nyssa native John Bates has signed his NFL rookie contract. And like Williams, the big dollars are contingent upon Bates making the Washington Football Team roster. But since Bates was a four-round draft pick last spring, his numbers are proportionately higher than those of Williams. The 6-6 tight end inked a four-year, $4.2 million deal, including a $722,000 bonus and a $722,000 guarantee. Bates’ average annual salary would be over $1 million.

Leighton Vander Esch is home for a work-and-play vacation. The former Boise State star and current Dallas Cowboys linebacker is hosting his LVE55 Football Camp tomorrow at Bishop Kelly. Vander Esch’s professional life right now consists of playing well enough for the Cowboys that they’ll keep him around after Dallas declined to pick up the fifth-year option on his rookie contract. LVE, as you might expect, is ready to grind. Brianna Dix of D210Sports reported recently that, when asked about the Cowboys selecting linebacker Micah Parsons 12th overall in the NFL Draft this spring, Vander Esch responded: “I don’t control who they pick. I can control my job and how I play and how I prepare and being a leader…competing WITH each other, not AGAINST each other.”

A TOUGH OPENER AT THE OPEN

The U.S. Open is a different animal, and that was reflected on Troy Merritt’s scorecard in the first round at Torrey Pines on Thursday. Merritt’s momentum from a magnificent May was of no help—the former Boise State star recorded five bogeys and just one birdie on his way to a four-over 75. The first round was suspended due to darkness with 36 golfers still on the course, but Merritt, tied for 96th, knows it’ll take a miracle to play the weekend.

HOWARD: “THIS IS 8 YEARS IN THE MAKING”

Boise State has two alums in the U.S. Olympic Trials in Eugene, Marisa Howard and Emma Bates, and it’s Howard who’s up first. She’ll run the first round of the 3,000-meter steeplechase on Sunday at Hayward Field. Howard, a Bronco from 2010-15, reached the Olympic qualifying standard in the steeplechase last month at the USATF Golden Games in Los Angeles with a time of 9:29.65. She is ranked sixth in the U.S. in the event—the top three finishers qualify for the Tokyo Games. Howard, who’s originally from Pasco, WA, has been living and training in Boise. “I’d love to put Idaho on the map a little bit more,” Howard told KTVB’s Jay Tust. Bates, by the way, doesn’t run until next Thursday in the 10,000-meters final.

HAWKS FADE AT THE FINISH LINE

The Boise Hawks almost chalked up their fourth win in a row Thursday night. Almost. Thanks to a three-run eighth-inning rally, the Hawks took a 6-4 lead into the bottom of the ninth in Idaho Falls. But the Chukars tallied three times to walk off with a 7-6 victory. Wladimir Galindo homered for the second straight night, part of Boise’s three-run eighth. And Hawks starter Jay Baggs had his best outing of the season. Pro ball has not been kind to the former Boise State hurler, but Baggs went 4 2/3 innings and allowed three runs, none earned.

June 18, 2014: It isn’t a perfect game, but some consider it to be the best pure pitching performance ever. Los Angeles Dodgers southpaw Clayton Kershaw no-hit the Colorado Rockies, 8-0, his night spoiled only by a seventh-inning throwing error by teammate Hanley Ramirez on a routine ground ball. Kershaw struck out 15 batters and did not walk anyone, the best strikeout-to-walk ratio ever for a no-hitter. The count went to three balls only once all night, and Kershaw needed only 107 pitches total to accomplish the feat.

Is the second wideout wave sustainable?