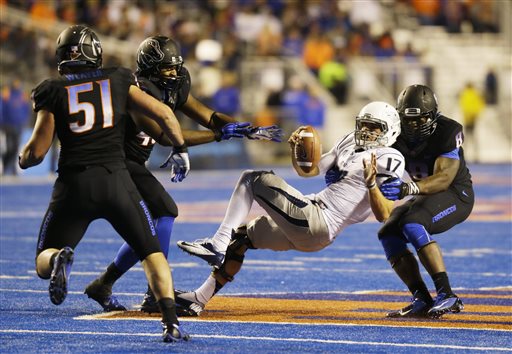 It’s the final week of voting in Boise State’s All-Decade Team, and they saved the best for last. You know the rules: “Any student-athlete who earned all-conference recognition from 2010-19—first-team, second-team or honorable mention—is eligible to be selected to the All-Decade Team.” Okay, so there are 18 candidates for the four spots on the defensive line. I spent some time on this (and still am). I have settled on Shea McClellin, a first-team all-conference pick in both the WAC and Mountain West; Curtis Weaver, a three-time first-teamer in the MW and last season’s conference Defensive Player of the Year; and two-time first-team All-Mountain West pick DeMarcus Lawrence. Oh, I need a fourth. Still workin’ it out between Tyrone Crawford and Kamalei Correa. Suggestions?

Predictably, there isn’t much news on who Boise State may or may not get back for this Saturday night’s game at Hawaii (or even if there will be enough guys to play the game). Three key players (beyond George Holani) are nose tackle Scale Igiehon, left tackle John Ojukwu and wide receiver Octavius Evans. Coach Bryan Harsin said Monday he hopes Igiehon can return, but in a nod to how well Keeghan Freeborn (now lost for the season) and Divine Obichere have played, he said, “You’ve got to work your way back.” There’s no word at all on Ojukwu, who was injured in the second quarter versus Colorado State.

Evans will miss a third straight game, though, and is not listed on Boise State’s depth chart. Coronavirus? We may never know unless Evans tells us. Hank Bachmeier acknowledged yesterday he tested positive sometime the week of the Air Force game. Evans caught a touchdown pass at Air Force from Jack Sears (whose status is also undetermined) and hasn’t been seen since. “No discipline issues or anything like that—he’s just not practicing with us right now,” Harsin said. That has opened a door for Stefan Cobbs, who made two catches for 21 yards against the Rams and had a dandy 36-yard grab overturned when it was ruled he was out-of-bounds.

A MOUNTAIN WEST PEAK AND VALLEY

This is what the Mountain West was hoping to get out of its new TV contract. The deal has its flaws, but the conference has landed Saturday’s San Diego State-Nevada game on CBS—with SEC mainstays Brad Nessler and Gary Danielson calling it, no less. It’s the league’s feature game this week, as the Aztecs are 3-1 and the Wolf Pack is 4-0, and it’s the first regular-season Mountain West game on network TV since Boise State-Nevada on ABC in 2012. At the other end of the spectrum is UNLV-Colorado State: canceled. The Rams have now had two of their five games scrapped—they also saw their opener against New Mexico go by the wayside.

If it holds, this will be nothing if not interesting. The Boise State men’s basketball Mountain West season is supposed to open in ExtraMile Arena with a pair of games against New Mexico December 3 and 5. That’s if Idaho’s modified Stage 2 of coronavirus protocols restricting gatherings in public and private spaces to 10 people or less expires in time. And that’s also dependent on the Lobos being able to play. UNM isn’t even practicing right now as it tries to find an out-of-state place to relocate (similar to what its football team has had to do). New Mexico is already discussing re-scheduling options with the conference.

At any rate, there would be a pause after the first week of December, and the schedule would resume on New Year’s Eve on the road with a two-game series at San Jose State. The end of the regular season, should it remain intact, would be wild. Over the final three weeks, Boise State would get UNLV and Utah State, picked to finish third and fourth in the Mountain West, at home. And the last two-game series would be at San Diego State. The Broncos, predicted to finish second in the league, won’t see the Aztecs, the preseason pick to win the MW, until February 25.

The NBA Draft finally comes down the pike tonight. Jonathan Givony of ESPN Insider still has Boise State’s Justinian Jessup going in the second round, now up to No. 56 overall. But even if it happens, that doesn’t mean Jessup won’t stay 8,000 miles away. He has arrived in Australia and is in the middle of his required quarantine in a Sydney hotel, he told Chris Lewis on the “Off The Blue” podcast. Nothin’ else to do but watch TV tonight. “I’m still draftable, and my contract is flexible,” Jessup said. “If a team wants to draft-and-stash, they can do that—or buy out my contract.” If he’s drafted, he won’t be counted against a team’s roster while he develops his game in Australia’s National Basketball League. “All this only matters if I’m drafted,” added Jessup. The NBL season is currently scheduled to begin January 15.

THE MW IN THE NBA DRAFT

The only other Mountain West player on Givony’s list is San Diego State’s Malachi Flynn, who he projects as a first-rounder—the No. 22 overall pick, going to the Denver Nuggets. “Flynn has moved up draft boards rapidly as NBA teams have gotten more exposure to him in the workout hotspot of Las Vegas, where he has spent the pre-draft process,” writes Givony. “That has helped validate the outstanding season he had as one of the best players in college basketball, as well as his fit in today’s NBA as a prolific pick-and-roll player with deep shooting range, strong decision-making and competitiveness defensively.” The wild cards are Nevada’s Jalen Harris, who had a monster conference season last winter, and Utah State’s Sam Merrill.

November 18, 2000, 20 years ago today: In the final regular season game ever in Big West football, Boise State routs Idaho, 66-24. The Broncos rolled up a 42-10 halftime lead on four of Bart Hendricks’ five touchdown passes on the day. Hendricks wrapped up his regular season career with his first 400-yard game, as the Broncos won the last Big West football title. The victory capped a 10-game conference winning streak during which Boise State averaged 50 points per game. 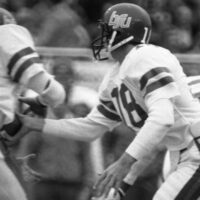 This Day In Sports: Division I-AA playoff run, the sequel