It’s a good conversation piece this week—Dave Southorn’s “computer-simulated search for the best team in Boise State history” at TheAthletic.com. Explains Southorn: “I created an eight-team bracket of the best seasons of Boise State’s time as an FBS program and played each matchup 10 times (with one winner-take-all game if the teams tied at five wins each after 10 rounds).” The field includes FBS teams from 2002, 2004 (undefeated regular season), 2006 (undefeated Fiesta Bowl champion), 2008 (undefeated regular season), 2009 (undefeated Fiesta Bowl champion, 2010, 2011 (yes, all four of Kellen Moore’s seasons) and 2014.

The 2002 team, the first one ever to earn a top 25 ranking at Boise State, snuck all the way into the finals against the 2010 squad. You’ll note that none of the three Fiesta Bowl champs made it into the title tilt. The mulligans here are really important. The 2002 Broncos lost at Arkansas in a game that saw star quarterback Ryan Dinwiddie break his ankle. Dinwiddie missed four games, but Boise State still annihilated everyone else on its schedule. The 2010 team was incredible, yet it had to live with the stunning loss at Nevada. But it topped the Fiesta Bowl team of 2009 in the semifinals. The computerized winner was the 2010 squad. I’ve always felt that one was the best. The undefeated 2006 and 2009 teams had some scary close calls. The 2010 group was dominant, with that one little exception.

FOOTNOTES ON THE TWO FINALISTS

In 2002, Dan Hawkins was in his second season, and Boise State was feeding off Hawk’s “Leave No Doubt” slogan after being left out of the bowl picture in 2001 despite an 8-4 record. Aside from the loss to the Razorbacks, the Broncos won every game in the regular season by at least 17 points before topping Iowa State in the Humanitarian Bowl for their first victory over a BCS school. The 2010 squad was loaded with talent. Moore, the winningest quarterback in college football history, wasn’t drafted—but a record six other Broncos were: Shea McClellin, Doug Martin, Tyrone Crawford, George Iloka, Billy Winn and Nate Potter.

Former Idaho Vandal star Shiloh Keo spent the last two seasons coaching defensive backs for Mike Moroski at College of Idaho, helping the Coyotes to a landmark 11-1 season. Now, Keo is slated to be part of Nick Saban’s staff at Alabama in a support capacity, according to the Birmingham News. That’s some upward mobility. Keo, an Eagle resident at last check, played five years in the NFL, capped by a Super Bowl ring with the Denver Broncos after the 2015 season. He amassed 358 tackles and 11 interceptions as a safety for the Vandals from 2006-10.

EXPANSION IN THE OFFING SIX YEARS FROM NOW?

That was one action-packed tweet Wednesday by Stadium’s Brett McMurphy, the longtime college football scribe. He surveyed FBS athletic directors, and 88 percent want an expanded College Football Playoff when the current deal ends in 2026. That’s 88 percent, with 72 percent favoring an eight-team setup. Two-thirds want the eight teams to consist of the five Power 5 conference champions, one Group of 5 team, and two at-larges. In terms of access, that’s a lot more like the old BCS system than the current one, which is a good thing. But here you go: 35 percent of the Power 5 Ads are against the Group of 5 getting a guaranteed bid.

HONOR FOR A C OF I FIXTURE

Congratulations to College of Idaho’s Mike Safford Jr., who has been named the 2019-20 Cascade Collegiate Conference Sports Information Director of the Year. Safford is in his 19th year as C of I’s Director of Athletic Communications, serving as the primary contact for 17 of the 20 sports sponsored by the school. He also has served as the play-by-play voice for Coyote football and basketball radio broadcasts and does soccer, volleyball, baseball, lacrosse and softball on YoteAthletics.com. Safford’s a busy dude and is extremely accomplished at his craft, and this is well-deserved.

April 9, 2017: Sergio Garcia finally gets his green jacket, beating Justin Rose on the first hole of a sudden-death playoff to win the Masters. Garcia rallied from two strokes down with six holes to play to tie Rose on the 18th. It was, in fact, the first victory in a major for the 37-year-old Spaniard after 70 tries, a record streak of futility. Garcia became the third Spanish golfer to win the Masters, joining the late Seve Ballesteros and Jose Maria Olazabel. And he did it on what would have been Ballesteros’ 60th birthday.

Windy City instead of the Rose City? 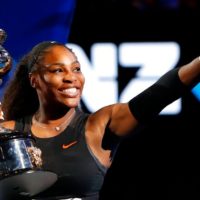 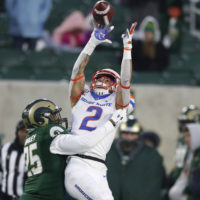