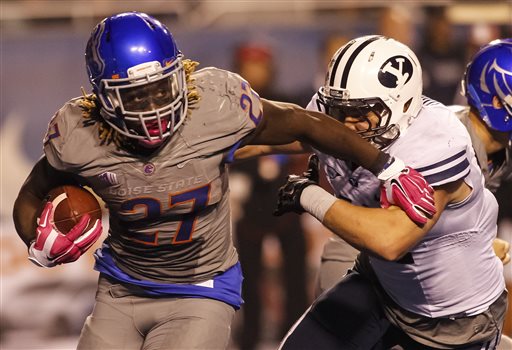 The Boise State-BYU history dates back to 2003, and the current 12-year series goes back to 2012. The teams have met five times on the blue turf, and the Broncos have won all five games. That provides another undercurrent of motivation for the Cougars. Along with the “conspiracy” to keep BYU fans from attending tonight. (I’m not even going there.) Boise State routed the Cougars 55-30 in 2014 behind Grant Hedrick’s career night, so there’s that. But, as you recall, the Broncos survived 21-16 in 2018—and the other three games in Boise were all decided by one point. This is the first time in series history both teams have been ranked: No. 9 is visiting No. 21. The Broncos have never gone into this game as a home underdog, but the latest line now has BYU favored by 3.5 points.

One of the great chess matches in tonight’s game will be between offensive coordinators Eric Kiesau of Boise State and Jeff Grimes of BYU. Kiesau’s cool play-calling has provided a lot of entertainment over the first two games, as the Broncos have averaged 45.5 points and 454.5 yards per game. If it’s Jack Sears calling the signals tonight, it appears he can handle Kiesau’s kitchen sink. If you’ve watched BYU play, you’ve seen that Grimes’ play-calling has been excellent. And Cougars insiders would add that quarterbacks coach Aaron Roderick has had a big hand in the offense’s creativity. Roderick has a prize pupil in Zach Wilson that makes it work. The Broncos are going to see things BYU has not yet shown on film. Every team before them has this season.

The last time Boise State and BYU met at Albertsons Stadium, the Broncos sacked Wilson seven times, and they wouldn’t have taken a five-point win without it. Now as a junior, Wilson has become Houdini-like, as he’s only been sacked four times in seven games. Boise State will have to chase him down tonight without its most accomplished pass-rusher, Demitri Washington, who was lost for the season after a knee injury at Air Force. It was “next man up” all over the place last week, and it was Shane Irwin who stepped in for Washington and logged eight tackles. Irwin had one of the Broncos’ sacks versus Utah State two weeks ago.

The other guy in the spotlight on the defensive front is Keeghan Freeborn, the sophomore nose tackle out of Rocky Mountain High. Freeborn had to fill the shoes of the injured Scale Igiehon at Air Force, and he responded with a team-leading nine tackles. That meant two former Treasure Valley high school stars clogging the middle side-by-side, as Homedale High grad Scott Matlock contributed eight stops. But the alarm sounds for Freeborn, Matlock, Irwin and every Bronco on the D-line when you look at last week’s sack column. It reads “0-0.0.”

Boise State will be staging its own little Black-Out tonight, donning their all-black uniforms on the blue turf. Will the whopping 1,000 people allowed to attend the game get the memo? If they do, Cougars fans will continue to claim “conspiracy.” (Oops—I went there.) After painstaking research, KTIK’s John Patrick determined that Boise State is 6-1 all-time in their all-black gear on the blue turf. Not to forget that the Broncos wore them in Provo when BYU staged a White-Out in 2015—and lost on Tanner Mangum’s Hail Mary.

The only quarterbacks available beyond Sears last week were true freshmen Cade Fennegan and Andy Peters. Fennegan is a scholarship QB from Dallas; Peters is a walk-on out of Timberline High. The Broncos showed that they don’t consider Fennegan an emergency fill-in when they put him in the game midway through the fourth quarter. His first collegiate snap resulted in a rush for a one-yard loss. Two plays later, Fennegan zipped in for a five-yard touchdown—that was overturned in one of the great injustices in school history (kidding, kind of). It ended up as a four-yard gain, and Sears came back in to score on the next play. Did someone say injustice? Let’s not forget Fennegan’s high school resume: 6,454 passing yards, 94 TD passes and 18 rushing touchdowns.

This season has been quite an ordeal for Air Force. The Falcons opened with a rout of Navy five weeks ago, but have lost two games since. Now they have no game Saturday—and it was going to be a big one. A flurry of positive COVID-19 tests has forced Air Force to postpone (or cancel) its game at Army tomorrow. Could it be made up December 19, the day of the Mountain West championship game (assuming the Falcons won’t be in it)? And what becomes of the Commander-In-Chief’s Trophy if the game isn’t ultimately played?

Elsewhere in the Mountain West, two Thursday night games kicked the week off. One was expected to be a rout, and it was, with 3-0 Nevada smothering Utah State 34-9. The Aggies are 0-3 and still have no offense, as quarterback Jason Shelley hasn’t reached 100 yards passing in a game yet. And Colorado State, which will be in Albertsons Stadium next Thursday, won the Border War against Wyoming 34-24 to regain the Bronze Boot. Another game to keep an eye on tonight is San Jose State at San Diego State. Both teams are 2-0, but the Aztecs are favored by nine points.

November 6, 1904: During the first quarter of a game against Oklahoma, Oklahoma State is forced to punt from its own one-yard-line. The punt, into gale-force winds, was blown 15 yards back over the punter’s head into Cottonwood Creek. Oklahoma halfback Ed Cook retrieved the ball and swam upstream to score the game’s first touchdown, and the Sooners went on to rout the Cowboys, 75-0. That’s even more bizarre than what happened to Boise State’s Joel Velazquez two weeks ago (the “butt-punt” for -38 yards).