Nothing makes Bronco Nation yearn for football season like an inflammatory tweet from the Fresno State football recruiting page. It was posted Friday, and it was as if it was begging for a laugh track. It read like this: “Last time we checked, no other school in the Mountain West has a richer tradition of success than the ‘Dogs! Over 40 years of winning football here in The Valley.” There were photos of the Bulldogs’ last five coaches dating back to Jim Sweeney, along with the program’s three Mountain West championship trophies. We could leave it at that, because that’s the only place this debate is close. The Bulldogs have three MW titles, and Boise State four.

The gap is so large in every other category, it’s pointless to even go there. But oh well. Last time I checked, Fresno State was 4-8 last year and 1-11 in 2016. Boise State has 22 consecutive winning seasons, the longest streak in the country. The Broncos have had just five losing seasons in 52 years as a four-year school. The Bulldogs have had five in the last nine seasons. They’ve lost 15 of 19 games to Boise State this century. The biggest Fresno State won in that stretch was 20 points. The biggest Broncos’ win has been 51 points—twice. In back-to-back seasons. There was a 50-pointer, too.

Only twice since 2000 have the Bulldogs finished the season in the Top 25. Boise State has done it 13 times. There are no BCS/New Year’s Six bowl games on Fresno State’s resume, much less victories. The Broncos, of course, are 3-for-3 in the Fiesta Bowl. It’s ironic that the Bulldogs want to take this claim back to 1980. That’s the year the Broncos won the Division I-AA national championship. There are three former Broncos on the Bulldogs coaching staff. What did they expect? C’mon, Lee Marks. You know better than that. You, too, Julius Brown. You, too, Kirby Moore. You helped build this thing up here.

SPRING BALL IS (OR WOULD HAVE BEEN) OVER

A pivotal Boise State spring football session was supposed to wrap up Saturday with the Spring Game. Instead, the Broncos have only three practices to go on as they plan for what they hope will be fall camp in August. By all accounts (including the Spring Preview on KBOI and KTIK Saturday), Boise State Players have been all in—remotely. But there’s no resolution on Hank Bachmeier’s learning curve, the rebuilding project on the offensive and defensive lines, and the new look at the safety position. It’s going to be a while.

Hopefully former Boise State kicker Tyler Rausa got what he needed out of the short-lived XFL. Because on Friday, the league folded and said it has no plans for 2021. Rausa scored the first points in XFL history with a field goal on February 8. Later in that game he connected on a 54-yarder. In the Defenders’ five games before the great sports shutdown, Rausa was 9-for-12 on field goals, including three makes from 50-plus yards. That should give NFL teams enough video to chew on. Could a training camp invite be in the offing? Rausa wouldn’t trade his XFL experience regardless. “Through it all, I established a brotherhood with guys I’ll be in contact with forever, he tweeted. “Things that life can never take away from the game.”

Two Mountain West hoops notes: Nevada guard Jalen Harris, who tore it up during the conference season, has declared for the 2020 NBA. Harris hasn’t hired an agent, though, and is leaving the door open to return to the Wolf Pack for his senior season. He averaged 21.6 points per game this past season and was named first-team All-MW. And Utah State point guard Abel Porter, a one-time walk-on, is headed to Ohio State as a graduate transfer. In the 2019-20 campaign, the 6-3 Porter started every game and averaged 5.6 points and 2.4 rebounds as the Aggies won the Mountain West tournament championship.

April 13, 2014: Bubba Watson wins his second Masters in three years, earning the green jacket by three strokes in a performance devoid of the drama of his 2012 victory. He fended off 20-year-old Jordan Spieth, who was tied with Watson after three rounds and was seeking to become the youngest Masters winner in history. Like Spieth, former Boise State star Graham DeLaet was playing his first Masters. But DeLaet was done in by an eight-over 80 in the first round and missed the cut. 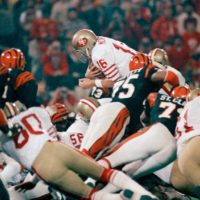