There’s an element of the Washington fan base that thinks Petersen was supposed to step right in and work the magic that led to his 92-12 record at Boise State. But building a program the way he wants it and getting buy-in from the players already in purple-and-gold takes time. If you’re familiar with Coach Pete’s need for vision and culture as part of his infrastructure, you’ll understand that there were growing pains in Seattle last year. “It was hard on everybody,” Petersen said. And with just 14 seniors and a combined 71 freshmen and sophomores on the roster, there are probably more to come. The positive is that most of these players are now Petersen’s guys. Can the fans up there be patient? UW opens fall camp this Saturday.

Washington will be Boise State’s fiercest rival for a day. Who will fill that role long-term? The Broncos don’t play Idaho anymore, and Nevada, Fresno State and San Diego State are off the schedule the next two seasons. Can you say “Utah State?” USU star quarterback Chuckie Keeton was interesting at Mountain West Media Days. A reporter asked Keeton who the Aggies would pick as a rival. Boise State? Colorado State? Air Force? Keeton was borderline indignant when he responded, “We don’t need to pick one. They can pick us.” You get the feeling Keeton wouldn’t mind the Broncos as rivals, though. Because of his injuries, he’s never faced them. “I played on their turf (in the 2012 Famous Idaho Potato Bowl)—and we won that game” he said. “And that’s what I’m going to hang my hat on.”

Keeton answered countless questions about his knee, surgically-repaired each of the past two seasons. He didn’t make it very far last year, with another knee injury in the third game of the season sidelining him for the rest of 2014. Now he’s hungry as he tries to regain the form that produced 3,373 passing yards and 27 touchdowns, plus 619 rushing yards and eight more TDs in 2012. “It’s been a long time since I’ve worn my (football) pants,” grinned Keeton. “I’ve worn the jersey all the time, but not the pants.”

Rivalry or not, October 16 is circled on the Utah State calendar. The Aggies are still smarting from the 50-19 loss they absorbed on the blue turf to end the regular season last year, if only because their program has matured to the point that they expect more from themselves. “Well, it’s the only team we haven’t beaten,” USU coach Matt Wells said of the Broncos. “We’re 0-2 against them (in the MW) and I like to remind my players of that often. To me, the road to the Mountain West championship goes through Boise, and it will always will until somebody knocks them off the throne.”

The running back position has been de-emphasized in the NFL (don’t tell that to Jay Ajayi and Doug Martin). At any rate, Bill Barnwell and Robert Mays consequently look at “The NFL’s Next Notable Pass Rushers” at Grantland.com, the sports and pop-culture blog owned and operated by ESPN. “As teams worry less about being bowled over on the ground, they focus more and more on finding players who can rush the quarterback and figuring out a way to fit them into the lineup.” One of the duo’s picks is Tyrone Crawford of Dallas. “Damn, does this guy jump off the screen at times,” writes Barnwell of the former Boise State standout. “Look at how quickly he gets from the line of scrimmage to the quarterback.” Crawford’s time is now. “He’s still in his infancy as a pass rusher, and he gets to learn from Rod Marinelli, the Mr. Miyagi of defensive line coaches.”

Also at Grantland.com, Matt Borcas has unveiled his “Hot Seat Watch 2015,” and the coach topping the list is Mike London of Virginia, Boise State’s September 25 opponent. “Let’s cut right to the chase: How does this man still have a job?” asks Borcas. “He’s been under fire since, like, 2010, and with good reason, namely his atrocious 11-29 conference record. Yet somehow, he’s managed to survive. His seat should be the hottest in the country, so perhaps he’s physically resistant to heat? How else to explain the utterly baffling phenomenon that is his continued employment by the Commonwealth of Virginia?” Ouch.

Under ordinary circumstances, Troy Merritt’s withdrawal from this week’s Reno-Tahoe Open (now the Barracuda Championship) would be a bummer. But the former Boise State star is giving up that spot to play the World Golf Championships Bridgestone Invitational in Akron, OH. Key word: “invitational.” Merritt earned a spot there with his first PGA Tour victory Sunday. He credits the impressive win in Virginia to some tweaks in his swing. “Merritt appeared to be walking in place as he set up for each shot, alternately tapping his feet to get them in exactly the right position,” said PGA Tour.com. “He said he made a slight change in the way he addressed the ball early in the week, and then a putting change made Saturday were critical to his victory. ‘That’s why I’m here. We found two little fixes,’ Merritt said.”

It is not lost on Treasure Valley golf fans that Merritt has accomplished this feat as a resident of Meridian. He planned on being home right now on the way to Tahoe, but the title in the Quicken Loans National blew up his itinerary. Merritt’s an Idahoan now. He cut his teeth on golf in Burley before his family moved to Fridley, MN, when he was in high school. Merritt started his college career at Winona State, A Division II school in Minnesota, before transferring to Boise State. It was in 2006, when he spent the summer working with his uncle at SpurWing Country Club, that Merritt was drawn back to Idaho.

The Pioneer League/Northwest League All-Star Game makes its debut tonight at Avista Stadium in Spokane. The Pioneer is technically a rookie-level league, but realistically it’s only a step below the Northwest League. By default, the Pioneer All-Stars will be underdogs, and they’ll play with that mentality. Three Boise Hawks players, Kevin Padlo, Brian Mundell and Hamlet Marte will represent the Hawks in the game. Padlo and Mundell were selected as starters at third base and first base, respectively. Hamlet Marte was selected as the reserve catcher.

KTVB.com Mountain West Nugget of the Day: Utah State’s Kyler Fackrell may be the Preseason Mountain West Defensive Player of the Year, but no one has a more impressive big play pedigree than Boise State linebacker Tanner Vallejo. The junior linebacker was Defensive MVP of the Fiesta Bowl and first-team All-Mountain West in 2014. Vallejo recorded 16.5 tackles for loss last year, the most by a ‘backer in the Broncos’ FBS era. And he scored two touchdowns on defense last season, a scoop-and-score of a fumble at UConn, and a 63-yard pick-six in the Mountain West championship game versus Fresno State. Did you know? Vallejo amassed 419 tackles in just three seasons of high school ball at Nevada Union High School in Grass Valley, CA.

Two big league milestones are realized by future Hall of Famers. Tom Seaver of the Chicago White Sox beats the Yankees, 4-1, for his 300th major league win. Meanwhile in Anaheim, Rod Carew of the California Angels gets his 3000th hit in a 6-5 win over his original team, the Minnesota Twins. 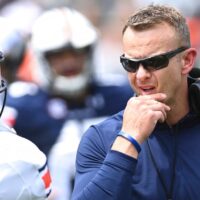 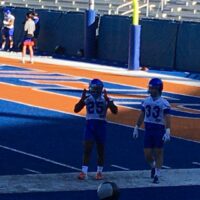