The most pleasing piece of video to come out of Boise State spring football over the weekend was Friday’s appearance in practice by quarterback Chase Cord. It’s been less than six months since Cord tore his ACL in practice the week following the San Diego State game, yet he was out zipping passes on the natural turf of DeChevrieux Field. His right leg was in a big black wrap, but he was limping only slightly. That doesn’t mean Cord will be ready for serious drills before fall camp, but it does indicate that he’s ahead of schedule in his rehab and that he’s fully engaged in spring ball. And it’s another reminder not to forget about him in the Broncos’ 2019 quarterback race.

IGIEHON GETS THE PROPS

Boise State held a scrimmage Saturday night—closed to the public but open to the media (I couldn’t attend, as I was emceeing the Idaho Youth Sports Commission Dinner and Auction, a most worthy event). For my media colleagues, it was kind of like the Go-Gos song: “Our Lips Are Sealed.” Their cameras, at least. But coach Bryan Harsin dropped a lot of Bronco names afterward. One was apparently a “consensus standout” in the session, Scale Igiehon. The 6-2, 300-pound sophomore is officially a nose tackle in Boise State’s 3-4 defense, and Harsin noted he was a force in the scrimmage. Igiehon sure gained steam as the 2018 season progressed. By November, he was a starter, shining in the win over BYU with five tackles and 1.5 sacks. Igiehon is poised to pick up where he left off.

Speaking of BYU, spring football wrapped up last weekend for the Cougars. Starting quarterback Zach Wilson (here’s the obligatory “former Boise State commit” reference) did not participate as he recovers from shoulder surgery. That means coach Kalani Sitake got a good look at backups Jaren Hall, Joe Critchlow and Baylor Romney. Hall was 12-of-14 for 203 yards and two touchdowns and ran five times for 59 yards in BYU’s spring scrimmage. But there’s little doubt who’s No. 1. Wilson’s rapid rise as a true freshman last fall culminated on the blue turf with his stunning 18-of-18 performance covering 317 yards and four touchdowns in the Cougars’ 49-18 win over Western Michigan in the Famous Idaho Potato Bowl.

It’s all over for Gonzaga after its 75-69 loss to Texas Tech Saturday night. But it was yet another remarkable run for the Zags, who have been doing this for 20 years. One postscript note on the Bulldogs’ season: forward Brandon Clarke has to be the poster player for the avalanche of transfers in today’s game. Two years ago Clarke was languishing as the feature player on a San Jose State team that went 14-16, averaging 17.3 points and 8.7 rebounds per game. Boise State knew how good he was—Clarke scored 26 points against the Broncos in one game that season and blocked five shots in the other. But he was toiling in anonymity. Clarke just finished a very visible junior year with a Gonzaga team that went 33-4.

Clarke now ponders his immediate future, as he’s emerged as a likely first-round NBA Draft pick. He broke both Gonzaga and West Coast Conference records for single-season blocked shots, finishing with 117. Clarke ended the season averaging 16.9 points, 8.5 rebounds and 3.1 blocks per game. A recent mock draft from Yahoo! Sports projects the 6-8 Clarke to be picked seventh overall by the Atlanta Hawks.

The early-season conqueror and end-of-season conqueror of Boise State have both been eliminated from the women’s NCAA Tournament. Louisville, who dispatched Boise State 74-55 on a memorable night in Taco Bell Arena in November, did about the same to Oregon State in the Sweet 16. The Cardinals stifled the Beavers 61-44 Friday night, as Meridian’s Destiny Slocum ended her sophomore year with eight points. Slocum was held to 3-for-13 shooting, including 0-for-4 from three-point range. Louisville was then cast aside by Uconn 80-73 in the Elite Eight on Sunday.

The Idaho Steelheads split the final two games of their series with Rapid City over the weekend, and it cost them first place in the ECHL Mountain Division. The Steelheads are now one point behind the Tulsa Oilers after falling 3-1 to the Rush Saturday night. The third period was not kind to the Steelies in the two games—Rapid City tallied twice in the final frame each night. Idaho survived it Friday, though, after letting a 3-1 lead slip away. The Steelheads were victorious 4-3 in shootout to earn their 40th win of the season.

ANOTHER SHOW FROM ALLIE O

The latest chapter in the Allie Ostrander Story was written Friday night at the Stanford Invitational. Boise State’s star distance runner broke Emma Bates’ school and Mountain West record in the 10,000-meters by almost seven seconds, clocking a 32:06.71. Ostrander finished third in an elite invitational field and was the fastest collegiate runner in the event. It was the 10th-fastest women’s 10,000 time in NCAA history. And it broke Ostrander’s personal best by almost four minutes.

April 1, 2006: George Mason’s Cinderella run in the NCAA Tournament ends with a 73-58 loss to eventual national champion Florida at the Final Four in Indianapolis. The suburban commuter school from Fairfax, VA, produced one of the great stories in the history of March Madness, knocking off Michigan State, North Carolina, and Wichita State to reach the Elite Eight. The 11th-seeded Patriots then stunned No. 1 seed Connecticut, 86-84 in overtime, to reach the Final Four. In December of that year, George Mason took out a full page ad in the Idaho Statesman wishing fellow Cinderella Boise State good luck against Oklahoma in the Fiesta Bowl. 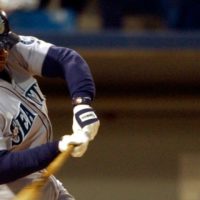