From Jeremy McNichols yesterday it’s on to Tanner Vallejo today as the NFL Draft looms. Vallejo’s stock has been rising for two reasons. First, the former Boise State linebacker had a strong NFL Combine performance, keyed by a 4.67-second clocking in the 40. Second, scouts are apparently realizing it’s important to take Vallejo’s 2014 season into consideration. “You might as well throw out (last) year because the guy was in a ton of pain all year long. It was obvious that something was wrong early in the year. I hate going all the way back to his sophomore year but I think you have to at least look at that tape to get a feel for who he might be able to become,” said an NFC regional scout at NFL.com. Vallejo famously shut it down last November to have surgery on one of his ailing wrists.

You don’t often see “missed tackles” as a stat—ProFootballFocus.com says Vallejo had 28 of them last season and was 432nd in tackling efficiency “among all off-ball LBs.” But again, there’s the asterisk. “He deserves some benefit of the doubt for playing in seven more games after tearing ligaments in his wrist in Week 2 against Washington State,” notes PFF’s analysis. Then there was that sophomore year, with 100 tackles, 16.5 tackles-for-loss, three sacks, one interception (a pick-six), and four pass breakups. And on the mantle: Defensive MVP trophies from the Mountain West championship game and the Fiesta Bowl.

We go around the horn with some spring football wraps that affect Boise State. Colorado State is all smiles after its annual Green and Gold Spring Game Saturday. From the Coloradoan: “Frustrated all spring by his defense’s inability to create turnovers, CSU football coach Mike Bobo couldn’t have been more pleased with what he saw.” The No. 1 defense intercepted three passes thrown by starting quarterback Nick Stevens and held the offense without a touchdown in the first half. The No. 2 defense also had a pick (the Broncos would like to borrow a few of those turnovers). With that said, Bobo called his Rams offense one that “has executed plays as well this spring as any he’s ever been associated with.”

Boise State allocated some time during spring football to work on option attacks, the first of which they’ll face when New Mexico comes to town September 16. But Lobos coach Bob Davie has been trumpeting his team’s passing fancy all spring, from the efficiency of his quarterbacks to the play-making of his wide receivers. At New Mexico’s annual Spring Showcase Saturday, all three of UNM’s scholarship quarterbacks—senior Lamar Jordan, redshirt freshman Tevaka Tuioti and junior graduate transfer Coltin Gerhart—threw the ball with touch and accuracy. The game contained no 11-on-11 tackling, so the Lobos’ vaunted running game was tough to judge. But remember that New Mexico returns 3,027 of the nation’s-best 4,550 yards rushing it compiled last season. There’s just no Terriyon Gipson.

At Washington State, quarterback Luke Falk guided a vanilla offense in the Crimson & Gary Game in Spokane Saturday (Mike “The Pirate” Leach isn’t about to give anything away). The story in the Seattle Times said Falk “displayed the calm demeanor and patient precision that have become his trademarks” while guiding Crimson to a 35-10 victory. He was a workmanlike 21-of-30 for 191 yards. Falk does appear to have a worthy backup, as sophomore Tyler Hilinski went 26-of-36 for 295 yards and one TD. The Cougars finish spring football with a practice this afternoon.

Attendance at Boise State’s Blue & Orange Game was down this month, as 5,112 attended the event on a wet and windy evening in Albertsons Stadium. How did the three aforementioned spring games fare? Wazzu had a good turnout, officially listed as 9,135 at Spokane’s Joe Albi Stadium. “Of those fans, 7,135 watched from inside the stadium with another 2,000 working on their tailgating from outside the venue,” according to the Cougs’ website. Tailgating is a tradition at the Washington State spring game—but they’re counted in the attendance figure? At Colorado State, about 2,000 were there. Rams fans must be waiting for the new stadium. And New Mexico drew “several hundred fans in near-perfect weather” according to the Albuquerque Journal.

There could be some hoops stabilization in Albuquerque, with at least one of New Mexico’s key departures reversing course. Sam Logwood tweeted last week that he’ll stay with the Lobos after all following at least a half dozen meetings with new coach Paul Weir over the week leading up to his decision. “Leaving wasn’t something I wanted to do,” said Logwood in the Albuquerque Journal. “It was something I felt like I had to do at that point.” Logwood said he and now-fired coach Craig Neal “weren’t on the same page exactly.” The 6-7 forward has started 66 games over the past three seasons. A couple other Lobos who had announced they were transferring are said to be reconsidering (although not star guard Elijah Brown).

Former Boise Hawk Dan Vogelbach was supposed to platoon at first base with Danny Valencia for the Seattle Mariners this year. Then came a sub-par spring training performance, and Vogelbach found himself starting the season at Triple-A Tacoma. Now, after a hot start with the Rainiers, he gets another shot in the bigs with a call-up to the M’s—and he went 1-for-4 with an RBI single in his 2017 big league debut Sunday in Oakland. Vogelbach was traded to the M’s organization last summer by the Cubs, who already had an entrenched first baseman in Anthony Rizzo. Vogelbach played in Tacoma until a September call-up, when he went 1-for-12 in Seattle. The 6-foot, 250-pounder had a Kyle Schwarber-type look in his time with the Hawks, playing in Boise in 2012 when he batted .322 with 10 home runs and 31 RBIs.

Chicago Cubs centerfielder Rick Monday becomes a national hero when he rescues an American flag from two people who are attempting to burn it in the outfield of Dodger Stadium. Monday would later be traded to L.A. in a deal that sent Bill Buckner to Chicago and would become a popular player for the Dodgers, whose fans had not forgotten. That day, by the way, was the 100th anniversary of the Cubs’ first game.

Hutch providing much to the Broncos 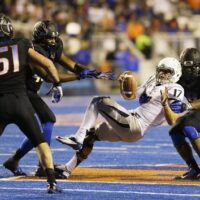 Kellen Moore and the court of public opinion