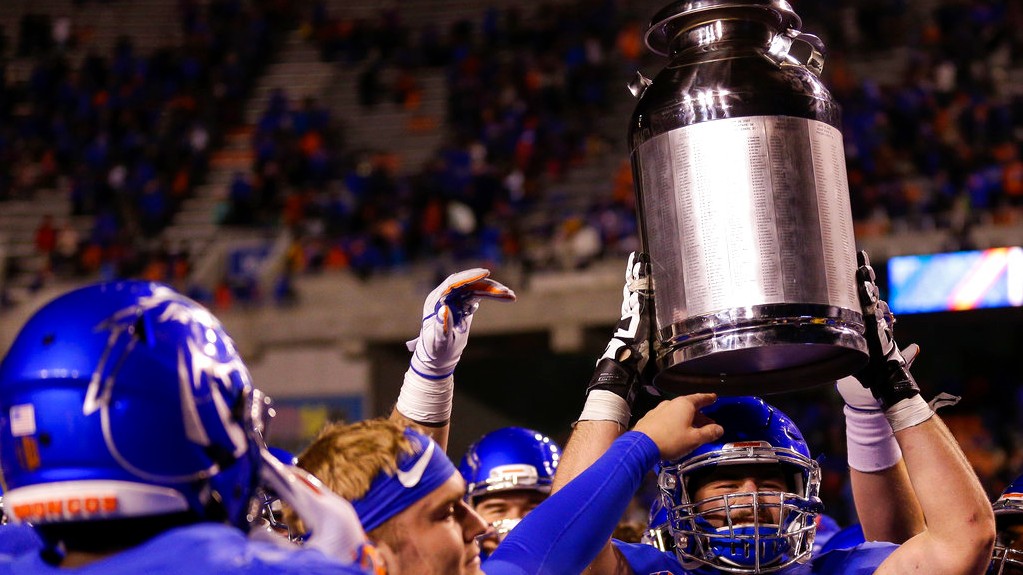 Some of my radio colleagues have dissed the Milk Can, the trophy that goes to the winner of regular-season games between Boise State and Fresno State. I disagree. The Bulldogs and San Diego State played for the Old Oil Can last week, and this one has just as much juice. The Milk Can was created by dairymen in the Treasure Valley and San Joaquin Valley, who have always had a friendly rivalry. The Broncos don’t have anything else like this, and now that it dates back 15 years, we can call it a tradition. The only problem with that is the Mountain West’s divisional rotation, which keeps these teams from playing every year. Who has the Milk Can right now? Since the trophy is only awarded for regular-season games, it currently belongs to Boise State via the Broncos 24-17 win in November of 2018.

THE RIVALRY WILL REKINDLE

This is kind of a lost rivalry—and to think that it was once so intense. They say it’s not a rivalry if one team wins all the time, but that didn’t make any difference a decade ago, when the Broncos were in the process of beating Fresno State 11 times in 12 years. When the Bulldogs finally broke through with Derek Carr in 2013, it was in front of a full house in Fresno, and it was as fiery as it was when Boise State pulled the landmark upset in 2001. The Broncos are 15-7 all-time against Fresno State—15-4 in the last 20 years. You can bet the players like the Milk Can. After grabbing the Old Oil Can from SDSU a week ago, Bulldogs defensive tackle Kevin Atkins said, “Knowing this is my last year, I would love to go out with every trophy we could possibly have and bring it back to Fresno.”

No. 25 Fresno State is favored Saturday night. The spread is five points, which doesn’t seem like much considering the body of work of each of these teams. The Bulldogs, 7-2, are the only Group of 5 program with two wins over Top 25 teams this season (UCLA and San Diego State, both on the road). Not even Cincinnati has done that. And they’ll have the benefit of a partisan capacity crowd. This will be Fresno State’s first sellout since its 2014 home opener against Nebraska. The capacity of Bulldog Stadium, by the way, is 40,727. As for the odds, well (cliché alert), that’s why they play the games. When the Broncos went to Fresno for that legendary upset in 2001, they were 22-point underdogs.

WHO DO THE BRONCOS HAVE TO STOP? AND VICE-VERSA?

Task No. 1 for Boise State will be what it has so often been this year: Stopping the run. But the Broncos can’t zero in on one Fresno State guy. Ronnie Rivers was out with an ankle injury in last week’s win over San Diego State, so Jordan Mims stepped in and rushed for 186 yards on 29 carries. Rivers will be back. What’s encouraging for Boise State is that it held Colorado State rushing leader David Bailey to 24 yards on 10 carries in the first quarter last week, and it got better from there. Bailey managed just 13 yards on 11 carries the rest of the game. Meanwhile, Bronco Nation’s fingers are crossed that George Holani and Cyrus Habibi-Likio came out of the win at CSU as healthy as they went in. For Holani that means handling a troublesome hamstring and abandoning the “snap count” that held him to 10 carries last Saturday.

Boise State kicker Jonah Dalmas has gone from a total unknown (literally) just over a year ago to semifinalist for the 2021 Lou Groza Award. Dalmas, the sophomore from Rocky Mountain High, was one of 20 semifinalists named Thursday for the honor that goes to the nation’s best placekicker. The sophomore from Rocky Mountain High is 22-for-25 on field goal attempts in his career, the third-best percentage nationally among active kickers. Also, one of the Broncos’ all-time greats on the offensive line, Daryn Colledge, has been hired by athletic director Jeramiah Dickey as the Bronco Athletic Association’s Director of Development and Varsity B Coordinator. Colledge started 137 of 141 games in a nine-year NFL career and won Super Bowl 45 with the Green Bay Packers.

It’s a good week for rivalries in the Mountain West. In addition to Boise State-Fresno State, you have the Border War between Colorado State and Wyoming in Laramie and Air Force’s quest to clinch the Commander-In-Chief’s Trophy with a win over Army at Globe Life Field in Arlington, TX. The Falcons haven’t won the coveted hardware since 2016. There’s nothing much else of consequence in the conference, unless you think San Jose State has a chance to upset Nevada in Reno or Hawaii has shot at upending San Diego State in Honolulu.

Well, the word is out there: TCU is interested in Kellen Moore as its new head coach. As outrageous as that sounds 10 months after Moore withdrew from consideration for the Boise State job, never say never. There’s a lot of money in Fort Worth. But the timing sure doesn’t seem right, especially when the Dallas offensive coordinator has the Cowboys attack riding so high—and with a smorgasboard of NFL jobs to peruse at the end of the season.

You can see why the Horned Frogs would want him, though. After the Dak Prescott-less win at Minnesota, Moore took a page right out of the Chris Petersen manual, saying: “The more guys you get involved in packages and roles and different things, that helps the individual but also helps the entire offense, just being able to play a number of guys in that game. I think we’ve got a lot of guys that we can utilize, and we want to try to use as many of them as we can.” That’s Kellen.

Idaho is poised for its third win of the season Saturday when Southern Utah visits the Kibbie Dome. The Thunderbirds are 1-8, but they gave Montana a scare before falling 20-19 last week in Missoula. No. 19 College of Idaho hosts rival Eastern Oregon in the Simplot Stadium home finale Saturday. The Mountaineers have lost five games in a row after a 3-0 start. The Idaho Steelheads fell 2-1 to the Tulsa Oilers Thursday night in the first of a three-game series. And Troy Merritt shot a three-under 68 Thursday in the first round of the World Wide Championship at Mayakoba. Merritt is tied for 36th.

The Boise State women’s soccer team is in the Mountain West title game following a gripping 2-1 win over Fresno State on penalty kicks Thursday at the Boas Soccer Complex. The Broncos and Bulldogs battled through a 1-1 draw in regulation and went two overtimes before deciding it on kicks. Even that went overtime. In the sixth frame, Boise State goalie Sydney Smith made the first save of the session, and the Broncos’ Michaela Justiniani followed with a walkoff goal. Smith was magnificent—she even came on to make one of Boise State’s penalty kicks.Boise State faces New Mexico for the title Saturday afternoon.

November 5, 1988: The Miami Heat play their first game in franchise history. The moribund L.A. Clippers were Miami’s Opening Night opponent, but it didn’t matter as the Heat were blown out, 111-91. The Heat would go on to lose their first 17 games before finally breaking through with their first victory on December 17—against the Clippers. Miami would go 15-67 in that first season. Seventeen seasons later, the Heat would win their first NBA championship in 2006 behind Dwyane Wade and league MVP Shaquille O’Neal.