Sources say that Big East presidents approved inviting and accepting Connecticut’s return to the conference on Monday. Now UConn just needs to make it official. Alex Putterman of the Hartford Courant joined Chris Lewis and Michael Fisher on Idaho SportsTalk Monday and said he sees the UConn football program going independent when the school returns to the Big East. And it could go further than that. “I think dropping down to the FCS (or dropping football altogether) will be on the table if things don’t go well,” said Putterman. It would be shocking to see Boise State in the mix as a football-only replacement for the Huskies in the American Athletic Conference. One of the many factors: what would become of the Broncos’ other sports? (So glad the Big West plan seven years ago never panned out.)

A refresher on what almost happened with Boise State football seven years ago. Had the Broncos not withdrawn from the Big East agreement on New Year’s Eve of 2012, they were slated to play home conference games against Houston, Louisville, Memphis and Rutgers in 2013—and road contests versus Cincinnati, SMU, Temple and San Diego State (who was also supposed to make the move). Boise State’s conference road trips would have totaled 7,024 miles. Sheesh. Of course, Louisville and Rutgers were soon gone (the Cardinals to the ACC and the Scarlet Knights to the Big Ten). And that was the beginning of the end of Boise State’s dalliance with the Big East.

A followup on Lindy’s magazine and all its lists. Let’s pick it up with “five hot Group of Five Coaches.” Bryan Harsin is always on this one. This time he’s No. 2. “Just wondering when the right fit will come along. Harsin has coached the Broncos back to a near Chris Petersen-era level,” writes Lindy’s. On the list of “hot seat coaches” is Florida State’s Willie Taggart, with this narrative: “After his disastrous debut, Taggart’s mandate is to win big right now. These days, coaches with two bad years often don’t get a chance to have a third bad year.” And hand-in-hand with that is the list of 2019’s “top non-conference games.” No. 9 is Seminoles-Broncos in Jacksonville on August 31. “Already can’t wait to see the Seminoles on the Boise blue turf in 2020,” writes Lindy’s.

Tying in with the “five hot Group of Five Coaches” is this one: “10 hot assistants.” Why? Well, Oregon defensive coordinator Andy Avalos is No. 9 on the assistants’ list. Writes Lindy’s: “An Oregon source told us that Mario Cristobal’s new DC, who was hired away from Boise State, will be a head coach in ‘two or three years.’” It’s hard not to connect some dots, since so many people liked to look at Avalos as Boise State’s “coach-in-waiting.” And it’s clear that Kellen Moore isn’t returning to college football anytime soon. Of course, there’s no inkling of Harsin going anywhere right now.

SOFTBALL SHENANIGANS AND A ‘BATTING AVERAGE’

The Bronco Football Summer Classic Softball Game took over Memorial Stadium Monday night, and Boise State offensive tackle Ezra Cleveland took it right out of the park three times. The offense didn’t muster up much offense otherwise, though, losing to the Bronco defense 19-5. Fans got a live look at quarterback Chase Cord’s rehab, as he played a little in the field and legged out a single. That’s a good sign with fall camp still almost six weeks away. Meanwhile, Boise State’s newest 2020 commit had a .583 average last fall. Meaning, seven of his 12 catches went for touchdowns. His name is Russell Corrigan, and he’s a 6-4, 230-pound tight end from Hutchinson, MN. That’s right, Minnesota. Corrigan also had offers from Wyoming, Air Force and Buffalo—and Harvard and Princeton. Smart dude, perhaps?

THE REBELS GETTING SERIOUS

UNLV is back on Boise State’s schedule this year and is here to remind you it’ll be no gimme in Las Vegas on Saturday night, October 5. The Broncos, who are in need of linebackers themselves, had to take note of this over the weekend. The Rebels have landed a graduate transfer ‘backer, Rayshad Jackson of Florida, who’s immediately eligibile. Jackson’s a 6-0, 236-pounder who appeared in all 13 games for the Gators last season, making 36 tackles and logging three quarterback hurries. UNLV’s second-year defensive coordinator, Tim Skipper, was Jackson’s linebackers coach at Florida in 2017. There’ll have to be a lot more to it if the Rebels are going to upset Boise State, though. They need quarterback Armani Rogers to take a major step forward this year—he completed just 44 percent of his throws last year.

The Boise Hawks are 0-for-the-road in 2019 after Spokane finished off a sweep of them Monday night at Avista Stadium. The Hawks dropped three straight to open the season at Salem-Keizer and just fell in four straight to the Indians. Notable in Monday’s 3-2 defeat was Aaron Schunk’s first home run of the season. Colorado Rockies first-round draft pick Michael Toglia, the slugger out of UCLA, went 0-for-4 in the game and is now hitting .167. The Hawks happily return home now to open a three-game series tonight against the Eugene Emeralds.

Jeff Caves talked at length on Idaho SportsTalk Monday about attending Bill Buckner’s memorial service Saturday in Boise—and what a great tribute it was. The highlight, according to Caves, was 91-year-old Tommy Lasorda, Buckner’s manager with not only the L.A. Dodgers, but also in the minor leagues. Lasorda, demonstrating that he always considered Buckner family, walked right up to the front of the church and sat next to Buckner’s widow, Jody. Among the moving speakers at the service were former Buckner teammates Bobby Valentine and Tom Paciorek of the Dodgers and Marty Barrett of the Red Sox.

June 25, 1999, 20 years ago today: Two years to the day after being drafted in the first round by San Antonio, Tim Duncan is named Most Valuable Player of the NBA Finals after the Spurs finish off the New York Knicks, four games to one. Playing alongside eventual Hall of Famer David Robinson, Duncan averaged 27.4 points and 14 rebounds per game in the series. It was San Antonio’s first-ever trip to the championship round. Incidentally, the point guard for the Knicks was Chris Childs, the first former Boise State player ever to appear in the NBA Finals. 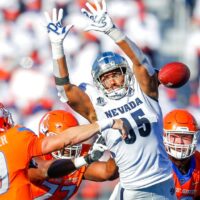 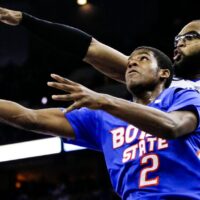 This Day In Sports: The blue-and-orange shocks the Bluejays 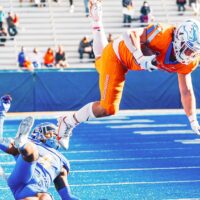 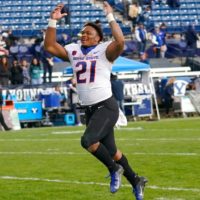