It was a landmark night in Taco Bell Arena. The Boise State women’s basketball program is legitimately elite in the Mountain West. The Broncos held off New Mexico 70-66 Monday night to clinch the conference regular season title and the No. 1 seed in the Mountain West Tournament next week. The game was like a bell curve. Boise State led 28-25 at the break after a cold-shooting, turnover-plagued first half. The Broncos appeared to break it open in the third quarter and led by nine at the end. But the Lobos trimmed the margin to two with 4½ minutes left in the game. Then Riley Lupfer hit a pair of three-pointers just over a minute apart, and that gave Boise State just enough breathing room.

The official attendance was 2,682, but it seemed a lot bigger than that. The boisterous crowd honored Marta Hermida and Joyce Harrell on Senior Night, and Hermida answered with 18 points to lead the Broncos. As for that elite status, well, Boise State has now won 25 of its last 27 games against Mountain West opponents and 32 of its last 34 versus teams outside the Power 5. The Broncos are now 24-4 and have cut the nets on their first outright regular season conference championship in 27 years. It’s the first time they’ve clinched it at home. What’s left now is the difficult quest of winning a fourth MW Tournament in five years next week in Las Vegas.

WHICH LOBOS WILL THE BRONCOS GET TOMORROW?

The New Mexico men have been stunningly inconsistent this season, and that’s a bad thing. Boise State, on the other hand, has been consistent. And that’s a bad thing, too. The Lobos, preparing to host the Broncos in The Pit tomorrow night, are really good when they’re good, and really bad when they’re bad. You may have seen this after UNM’s inexplicable loss at San Jose State a week ago. The Spartans, who are currently 4-25 overall, came out of that game still ranked No. 340 out of 353 Division I teams by KenPom.com. Since Ken Pomeroy started his analytics in 2002, New Mexico has the largest disparity in rankings between its worst loss and its best win (85-57 over a Nevada team that was ranked No. 22 last week by KenPom). Of course, the Lobos followed up by beating Colorado State 77-65 on Saturday.

Nevada has plummeted again in the polls, falling to No. 17 in the AP rankings and No. 18 in the Coaches Poll after losing 81-76 at Utah State Saturday night, propelling the Aggies into the Mountain West lead by a half-game over the Wolf Pack. That would be bad news for the Mountain West were it not for the attention USU is attracting. The Aggies are fourth in line to make the AP top 25 and seventh in line to get into the Coaches Poll.

The conference’s feature game of the year so far has been overshadowed by the postgame brouhaha in Logan. Initial reports said Nevada players were touched and jostled by the Utah State court-stormers in the Dee Glen Smith Spectrum, and Pack star Jordan Caroline was so angered by alleged comments from a Utah State assistant coach that he broke the glass of a fire extinguisher case in a chaotic hallway scene. But a Mountain West review pointed to behavior by both sides in the handshake line at the end of the game and will leave disciplinary action up the schools.

About this time of year, there’s always a lot of residual excitement about Boise State’s recruiting class (especially the 2019 group). The forgotten guys are the redshirts, the stars of the previous year’s recruiting class. With that in mind, I asked coach Bryan Harsin who out of the 2018 class is ready to pop out there. His instant response was Scott Matlock, and that was good to hear. Matlock is the defensive tackle who lost both parents by the time he was a Boise eighth-grader, moved to Homedale and starred as a Trojan, and was supposed to grayshirt last season. But the Broncos opened up a spot for him, and he actually got into two games last fall (while retaining his redshirt). Now 6-4 and 281 pounds, Matlock is poised to—at the very least—make a bid to back up David Moa and Chase Hatada at D-tackle.

Harsin also mentioned cornerback Chris Mitchell, wide receiver Stefan Cobbs, linebacker Brandon Hawkins and running back Danny Smith among the emerging Boise State redshirts. Mitchell was talked about last year as a possible true freshman contributor. Now he’ll be in the competition mix to replace Tyler Horton. Cobbs is interesting because the Broncos are so stacked at his position. There’s a crowd at wideout, beginning with the returnees, John Hightower, CT Thomas, Akilian Butler and Khalil Shakir. Cobbs, the 6-0, 177-pounder from Keller, TX, had 1,332 receiving yards and 24 touchdowns as a high school senior in 2017.

‘TANK’ GETS TAGGED AGAIN BY DALLAS

Well, DeMarcus Lawrence has been nailed with the franchise tag for the second consecutive year by the Dallas Cowboys. Last season the former Boise State star made $17 million with the tag—this year the number is $20.5 million. In 2018, Lawrence called it “an opportunity to break the bank.” Lawrence, who NFL.com calls “the top free agent of the 2019 class,” is not so enthusiastic this time. He has suggested previously that he won’t sign the tag deal, will put off his shoulder operation, and will stay away from the team until a long-term contract is in place. Lawrence and the Cowboys have until July 15 to work out such a deal. This’ll be the last chance for Dallas. Over the past two seasons, Lawrence did not miss a game while racking up 25 sacks and forcing six fumbles.

BIGGEST NAMES OF 2019 AMONG FORMER HAWKS

Sports Illustrated ranks the top 100 players in Major League Baseball for 2019 in this week’s issue, and three former Boise Hawks made the cut. The Cubs’ Kris Bryant is No. 17 (no, he’s not over the hill at the age of 27). One-time American League MVP Josh Donaldson, now an Atlanta Brave, is No. 68. And No. 70 is Gleyber Torres, going into his second season with the Yankees. Torres hit 24 home runs in just 123 games last season, finishing second to the Angels’ Shosei Ohtani in Rookie of the Year voting. Says SI of Torres: “He has too much swing-and-miss, but when he connects, the ball goes a long way. At 22, he’s still a baby.”

March 5, 1984: Quarterback Steve Young, fresh out of BYU, signs a long-term contract worth $40 million with the Los Angeles Express of the United States Football League. According to terms of the deal, deferred payments would be made to Young until the year 2027. When the USFL later folded, Young bought out the contract and jumped to the NFL with Tampa Bay. By the way, Pokey Allen, nine years before he was head coach at Boise State, was an assistant with the L.A. Express that year. 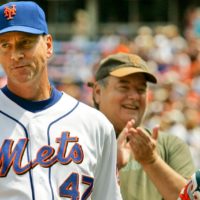 This Day In Sports: Will any pitcher ever reach 300 again?

And it comes down to the finale