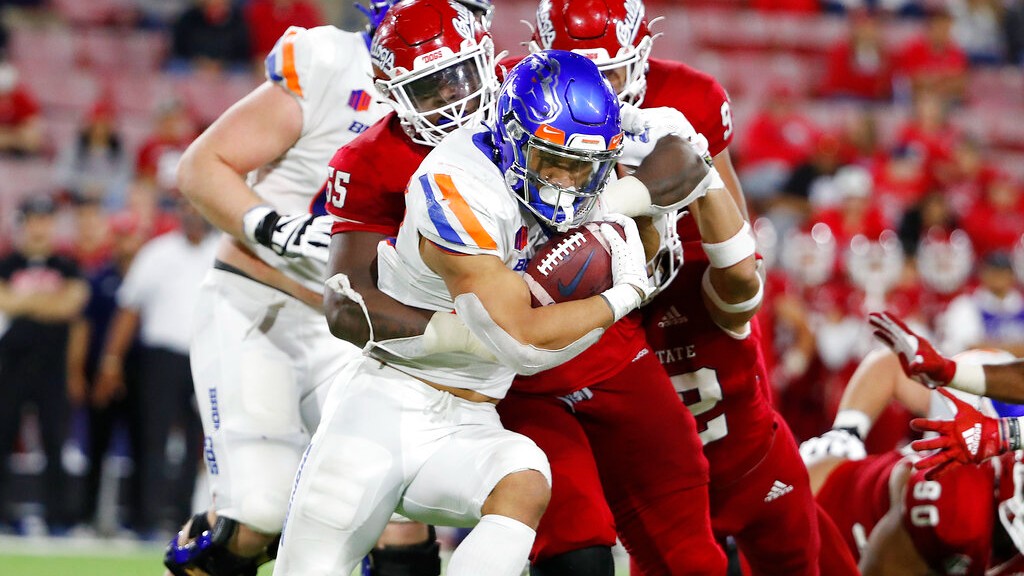 And just like that, Boise State is over .500 for the first time this season and has won three of its past four games. The Broncos took the upset of BYU and did it one better Saturday, rocking Fresno State 40-14 and silencing the Bulldogs’ first sellout crowd in seven years. The 26-point margin of victory was Boise State’s largest ever over a ranked opponent, besting the 26-3 win over Utah in the 2010 Las Vegas Bowl. The defense kept setting up the offense, and the offense kept cashing in. The offensive and defensive lines, often criticized this season for not being physical enough, played their best collective game of the season. There’s only one way to look at this team right now. The offense is getting genuinely better, the defense is getting genuinely better, and the coaching staff is getting genuinely better. Now it’s all about the finish.

Boise State finally got the old George Holani back at Fresno State. The slashing-and-darting George Holani. He rushed for 117 yards, averaging 5.6 yards per carry, and had 69 receiving yards, all on two big plays in the first quarter. It was the Broncos’ first 100-yard game of the season, and Holani’s first since the last time he was fully healthy, in last season’s opener against Utah State. Holani’s 186 all-purpose yards were the second-most of his career. Early in the fourth quarter, when the Bulldogs still had some energy despite trailing 26-7, Holani carried the ball on five straight plays, gaining 29 yards. The drive was capped by Andrew Van Buren’s second touchdown, and the rush for the exits accelerated in Bulldog Stadium.

Boise State media relations was doing research late Saturday night and found that Kekaula and Kaonohi Kaniho are just the third known set of brothers in college football history to record interceptions in the same game. And it is said to be a first for the Broncos. I would say so—I can’t find a time that a set of brothers has ever played together on defense for Boise State other than the Kanihos. Kekaula set the tone at Fresno State with his first-quarter pick of Jake Haener, and Kaonohi got his in the third quarter. The Bulldogs picked on him one too many times. One other defensive first worth noting at Fresno State: at long last, Demitri Washington logged his first sack of the season. Once lauded as the successor to Curtis Weaver as the Broncos’ sackmaster, Washington hadn’t had one since the 2019 Las Vegas Bowl.

Before Boise State started scoring touchdowns on a more regular basis at Fresno State Saturday night, it was the Jonah Dalmas show. The sophomore out of Rocky Mountain has ice water in his veins, booting four field goals while hearing about it from the crowd of 41,031 in Bulldog Stadium. It was especially loud for the first one, but Dalmas cooly nailed a 47-yarder. Dalmas would have had tied a school record with a fifth field goal, but the Broncos took the points from his 44-yarder off the board on a roughing the kicker penalty and went in for a TD. Dalmas is going to break that record someday. He’s actually on track to break Tyler Rausa’s mark for field goals in a single season. Rausa’s record is 25—Dalmas has 19 with at least three games to play. Dalmas is 19-for-21 this year for 90.5 percent.

RUNNING BACKS IN THE RECORD BOOKS

Feature running backs were the story in the two college football games played in-state Saturday. In Moscow, Roshaun Johnson scored a school-record six touchdowns to lead the Idaho to a 42-24 Senior Day win over Southern Utah in the Kibbie Dome. Johnson rushed for a career-high 174 yards. His six TDs are the most in a single game in Division I this season, FBS or FCS. And in Caldwell, Nick Calzaretta became College of Idaho’s career rushing leader in the Coyotes’ 21-3 win over rival Eastern Oregon. Calzaretta passed the mark on the way to the end zone on a 76-yard touchdown run in the fourth quarter. It was the 41st TD of his career. Calzaretta now has 3,424 yards, 11 better than previous record-holder Darius-James Peterson.

It’s not where you start, but where you finish. Boy howdy does Boise State men’s basketball know how that concept works. The start for 2021-22 is Tuesday night against Utah Valley in ExtraMile Arena. It’s still stunning that the Broncos aren’t coming off a 20-win season after starting 13-1 last winter. They went 19-9 and missed out on their expressed goal, the NCAA Tournament. Now it’s a fresh start as Leon Rice enters his 12th campaign as head coach. Rice has led Boise State to eight 20-win seasons in 11 tries. Top to bottom, the Broncos should be at least as talented as last season, even without Derrick Alston Jr.

The Idaho Steelheads salvaged one win out of their three-game series at Tulsa, edging the Oilers 2-1 Sunday afternoon. The Steelheads got a great performance between the pipes from Adam Scheel, who stopped 31 of 32 Tulsa shots while picking up his second win of the season. And Troy Merritt had a nice stay in Mexico, finishing tied for 15th at the World Wide Championship at Mayakoba. Merritt clocked four birdies on the front nine in the final round of the Playa del Carmen event to shoot a four-under 67, earning $109,800.

CINDERELLA WAS AT THE DOORSTEP

Boise State women’s soccer was the first No. 6 seed ever to make a Mountain West championship game, and the Broncos made it interesting Saturday against New Mexico at the Boas Soccer Complex. But the run came to an end with a 2-1 overtime loss to the Lobos. UNM scored in the 33rd minute, and Boise State’s Morgan Stone answered in the 79th to set up overtime. But New Mexico’s Jadyn Edwards, the Mountain West Offensive Player of the Year, tallied in the first minute of the OT.

November 8, 1970: One of the all-time NFL highlight clips. The disbelieving Detroit Lions watch New Orleans kicker Tom Dempsey, born without toes on the foot he uses for kicking, come in to attempt a 63-yard field goal. The boot sailed through the uprights as time expired, giving the Saints a 19-17 win. It was an NFL record—tied by Denver’s Jason Elam in 1998 and broken by the Broncos’ Matt Prater with a 64-yarder in 2013. Earlier this season, a new mark was established when Baltimore’s Justin Tucker booted a 66-yard field goal on the final play of the game to beat Detroit.

The bench didn’t duck its duty

Remnants of the rivalry