The Mountain Division of the Mountain West is not a surprise. The West Division is six of one—half-dozen of the other. The conference’s preseason poll was released Tuesday, and Boise State received 20 of 21 first-place votes in the Mountain. You could call this habit, as the Broncos have been predicted to win the division in each of the last seven seasons. They’ve done it four straight times. Boise State has won 22 of its last 24 MW contests, including 14 straight. For voters, though, the vast amount of talent at the Broncos’ skill positions on offense outweighs concerns over the rebuilding of the offensive line. There’s reconstruction on the defensive line, but there are lots of candidates. Wyoming received the only other first-place vote. Look out for that game in Laramie in November.

San Diego State is the dominant choice in the West Division, although almost every team can make a case for the title. The Aztecs garnered 19 of the 21 first-place votes, with the other two going to Nevada. But SDSU has a new coach, Brady Hoke. So do Hawaii, Fresno State and UNLV. All four of those teams are wild cards. The Rainbow Warriors could have some growing pains under Todd Graham, but the Bulldogs have a new bounce in their collective step under Kalen DeBoer. And the Rebels made a solid hire in Marcus Arroyo and have been hot on the recruiting trail. The voters don’t think the West is wide open, but I do.

WHERE THE BALL GOES, SO GOES KANIHO

Boise State has nine mentions so far on college football preseason watch lists, and Kekaula Kaniho has three of them. On Tuesday, the senior nickel was named a candidate for the Bronko Nagurski Trophy that goes to the defensive player of the year. It’s too bad there’s not a Nose-For-The-Football Trophy, because that’s what defines Kaniho. He’s the one who picked up a fumble on a punt return by Avery Williams and took it the remaining 74 yards for a touchdown against Colorado State in 2018. His official career stats: zero returns, 74 yards, one TD. The preseason All-Mountain West teams will be revealed by the conference today, and it’s a sure bet Kaniho will be on it.

TRANSFER NO. 2 FOR BENNETT

Quarterback Kaiden Bennett is on the move again, departing Nevada and entering the transfer portal, according to Chris Murray at Nevada SportsNet. Bennett left Boise State at the end of fall camp last August, with his father Derek saying he didn’t get a fair shot at the Broncos starting job ultimately won by Hank Bachmeier. But Derek Bennett told NSN that the real reason was that he was diagnosed with cancer, and that Kaiden transferred to Nevada to be closer to him. Now, the elder Bennett said, the cancer is gone, and Kaiden “would like the opportunity to play in an offense that suits his style of play better. One that has designed QB runs and allows him to use mobility.”

MATT WELLS WILL TAKE HIM

Henry Colombi didn’t feel wanted in Logan, but his old coach wants him in Lubbock. Colombi entered the transfer portal last Wednesday, just after fellow quarterback Jason Shelley announced his transfer to Utah State from Utah. Yesterday, Colombi tweeted that he’s headed to Texas Tech, where he’ll be reunited with former USU coach Matt Wells and ex-Aggies offensive coordinator David Yost. The 6-2, 205-pounder appeared in 13 games for Utah State the past two years, throwing for 460 yards and two touchdowns and rushing for 139 yards and another two TDs.

EARLY HOOPS RETURNS ARE IN

Jeff Goodman of Stadium has unveiled his men’s basketball preseason Top 50, and he ranks Boise State No. 47. The Broncos are the only Mountain West team on the list, so you can call them Goodman’s pick to win the conference. Even if they don’t, a top 50 finish this coming season would put them in the at-large pool for the 2021 NCAA Tournament. Goodman doesn’t have analysis of each team—he just breaks down the roster. And there you have Derrick Alston, Abu Kigab, Emmanuel Akot, Marcus Shaver, Mladen Armus, RayJ Dennis, etc.

July 22, 2012: In a classic meltdown, Adam Scott lets a four-shot lead with four holes to play slip away at the 141st British Open. Scott bogeyed each of the final four holes at Royal Lytham & St. Annes, allowing steady South African Ernie Els to finish a rally from seven strokes back in the final round for the victory. Els, the first Albertsons Boise Open alum to win one of golf’s major tournaments (US Open, 1997), claimed his fourth major and first in 10 years. Els was as surprised as anyone. 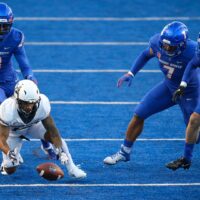 Bronco defense: Stay in your lane