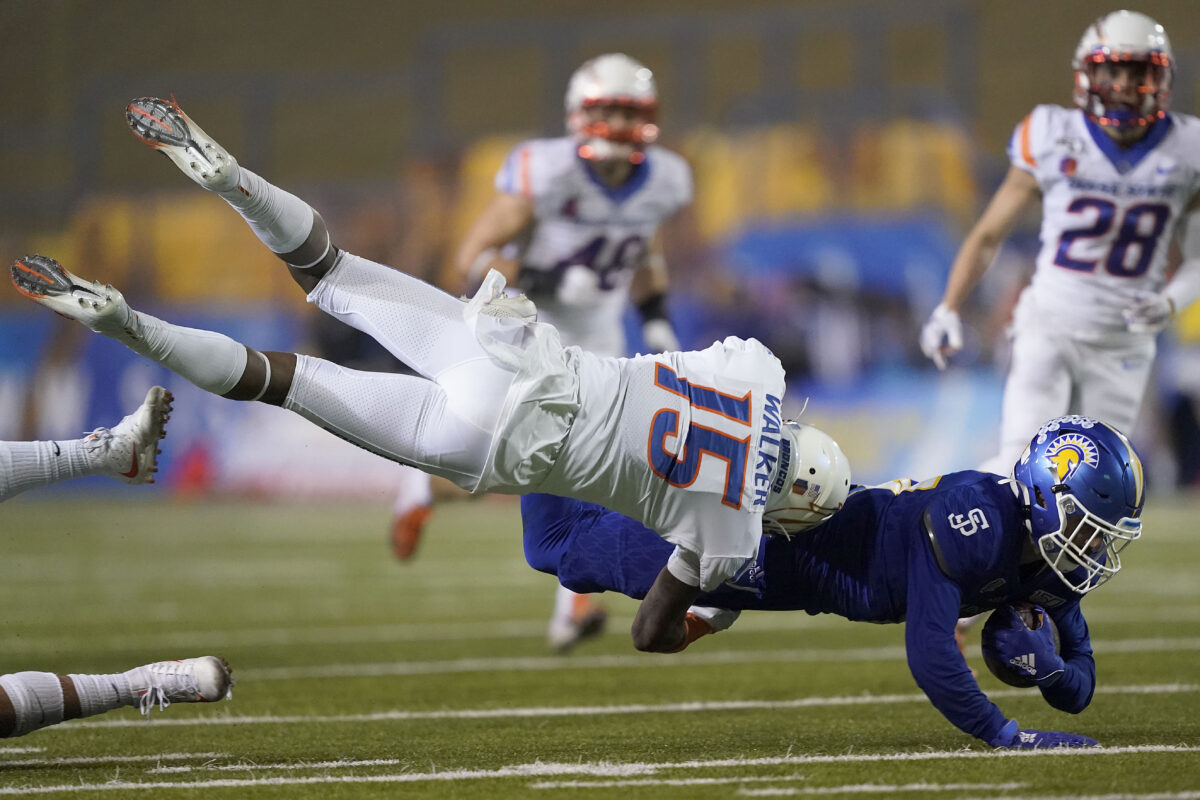 It is well-documented. San Jose State never beaten Boise State in 14 tries. You can hear this around the Silicon Valley right now: “There’s always a first time.” The 4-0 Spartans believe this is a natural time for it, as they hit the blue turf Saturday afternoon riding their best start in 65 years. Only two games between the two teams in Albertsons Stadium have been decided by 15 points or fewer: the first one in 1978 and the last one in 2016. The Spartans served as only the second Division I-A team to visit Boise State in that initial meeting. It was the Broncos’ first season in Division I-AA, and they won 30-15. The last time San Jose State was here it found itself in a track meet with Boise State, which prevailed 45-31 as both Jeremy McNichols and Alexander Mattison topped 100 yards.

But two close calls in San Jose almost ruined undefeated regular seasons for Boise State. There was the “Breakfast With The Broncos” game in 2004, the one that was moved to 9 a.m. Pacific time to get it on ESPN2. Boise State survived 56-49 in double-overtime, and it wouldn’t have lasted that long had Gerald Alexander not blocked a Spartans field goal attempt with just over a minute left in regulation. And how about 2006, the first Fiesta Bowl season. The Broncos trailed by eight points in the fourth quarter before rallying for a 23-20 win.

You don’t go win your first four games without great play on both sides of the ball. But the consensus is, the San Jose State defense has been the catalyst. Take defensive end Cade Hall, for example. He was Mountain West Defensive Player of the Week for his performance 2½ weeks ago against UNLV. Hall did his best Curtis Weaver impression, recording three sacks among his four tackles-for-loss. Here’s the Spartans’ report card: first in the Mountain West in scoring defense, allowing just 15.4 points per game, and fourth in total defense at 349 yards per.

The Broncos could not stop Josh Love, Tre Walker and Bailey Gaither last year—can they stop Nick Starkel, Walker and Gaither this year? The latter two guys are San Jose State’s feature receivers, and they combined for 17 catches and a staggering 303 yards in Boise State’s 52-42 win last season. Love was the quarterback that time, so will Starkel be easier to defend? Well, Starkel is only the most efficient passer in the Mountain West, with a rating of 171.0. The Arkansas transfer is completing 70 percent of his passes and has thrown for nine touchdowns against just two interceptions. If last week’s first-half Broncos defense plays four quarters Saturday, it’s got a shot. If it’s the second-half defense, look out.

The AP and Coaches Polls are officially secondary now. It was late, just like everything else in sports in 2020, but the first College Football Playoff rankings of the season are out. The committee pays no never-mind to the traditional polls; it reads its own data. There’s not a lot of respect for 9-0 BYU. The Cougars, who are No. 8 in both of the standard polls, debuted all the way down at No. 14 in the CFP. It’s too late now to get that game scheduled with Washington this week, but man could the Cougars use it. Win or bust.

Predictably, BYU’s ranking blew up social media, and the Cougars’ angry reaction has rankled Boise State fans. Iowa athletic director Gary Barta, chairman of the CFP committee, got BYU going when he said, “You look at their schedule, with the best win against Boise State that was short handed in that game.” Barta referred to the Broncos’ quarterback situation in the 51-17 Cougars win. Then BYU play-by-play man Greg Wrubell tweeted, “Boise QB Jack Sears didn’t finish the BYU-BSU game, but I know he started it. To quote Kalani Sitake after the game: ‘When you play us, you’re gonna feel us.’” Like on a helmet-to-helmet hit that wasn’t called, giving Sears a concussion less then seven minutes into the game. That did not sit well at all.

Thursday is America’s annual Dallas Cowboys Day, and this year the Cowboys host the Washington Football Team. At least they have some momentum going, having snapped a four-game losing streak following a 31-28 win at Minnesota. Former Boise State star DeMarcus Lawrence has kept his edge during this most difficult of seasons, and he forced one fumble and recovered another. Lawrence also shared a sack in the game, while fellow Boise State product Leighton Vander Esch led Dallas with 11 tackles. And offensive coordinator Kellen Moore, with Andy Dalton back under center, called what fan site BloggingTheBoys.com termed “the best game of his young career.”

THE PLATE IS ALMOST FULL

The Boise State men’s basketball game at No. 17 Houston Friday afternoon is the first of five known non-conference matchups for the Broncos this season. The program has announced the others as Sam Houston State (Sunday at the Southwest Showcase in Fort Worth), BYU on the road, and Santa Clara and Loyola Marymount at home. The BYU meeting on December 9 is a return game for last year’s 72-68 overtime victory by the Broncos in ExtraMile Arena, their biggest victory of the season. Boise State is working to add two more non-conference games to reach this season’s NCAA-mandated maximum of 27 games total (in addition to these five, there are 20 Mountain West games scheduled).

November 25, 1980, 40 years ago today: In “the Super Fight” at the Superdome in the New Orleans, a rematch of Roberto Duran’s earlier win over Sugar Ray Leonard that took away the welterweight title, Leonard does more than retaliate. He broke down Duran and his machismo. With 16 seconds left in Round 8, the man with the “Mano de Piedra” (“Hand of Stone”) turned to the referee and gave his now-famous “no mas, no mas” surrender, and Leonard reclaimed his welterweight championship.

The O-line tries to get back in line