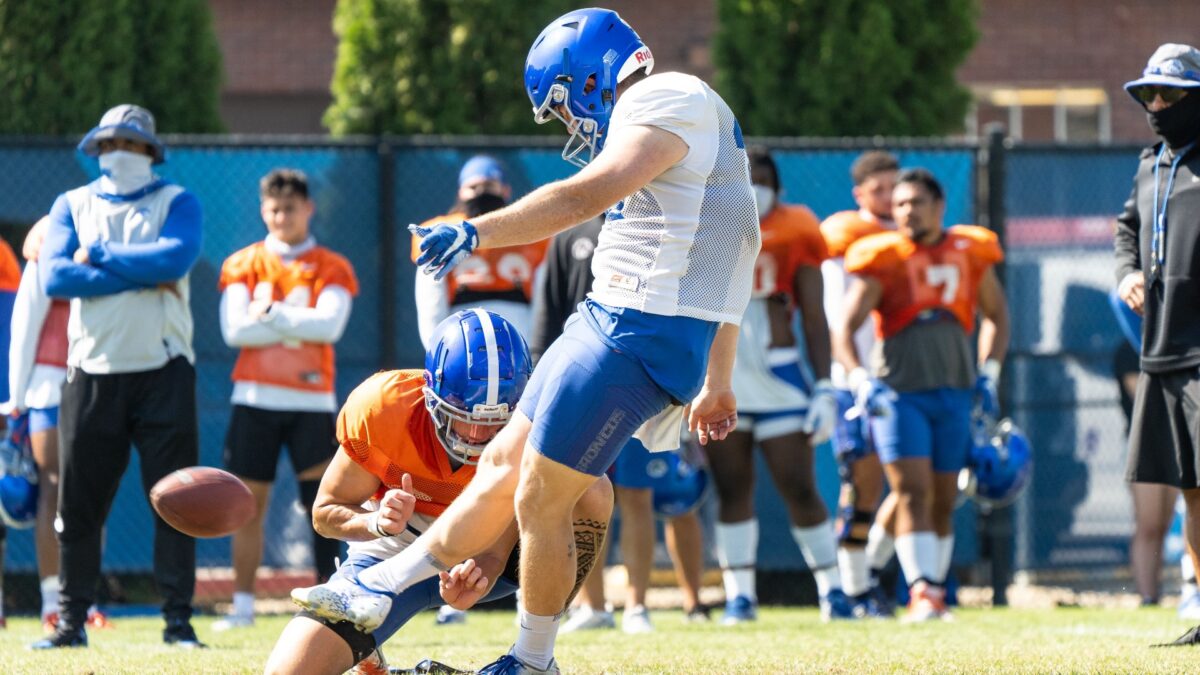 Special teams are a current topic as Boise State enters the final two weeks before the showdown at UCF. What kind of a super-senior year will punter and kickoff specialist Joel Velazquez have? It’s been a rollercoaster. Broncos special teams coach Stacy Collins said Velazquez made a field goal of almost 60 yards in the first scrimmage last Saturday, which is why he’s such a solid kickoff guy. The boots go long, and they don’t have to go through the goal posts. Velazquez has nailed touchbacks on 164 of his 266 career kickoffs. His punting has been all over the board, no moreso than in last year’s opener versus Utah State. He uncorked a 71-yard punt, the longest by a Bronco in 11 years. Then Velazquez mishit a line drive into the backside of up-man John Bates, and it careened backward 38 yards.

A year ago Velazquez was a candidate to tale over as field goal kicker, too, at least until walk-on Jonah Dalmas came out of nowhere and got the job (and a scholarship). But, judging by that 60-yard-ish field goal, Velazquez could be the designated long-distance kicker. He was called on for that at UNLV two years ago, ending the first half by nailing a 52-yarder. Among Velazquez’s other big moments in the program was in one of the Broncos’ most memorable games in 2017 at Colorado State. He executed a perfect onside kick late in the fourth quarter that was acrobatically recovered by Cedrick Wilson. Boise State ended up completing a comeback from 25 points down and winning 59-52 in overtime, and Velazquez was named Mountain West Special Teams Player of the Week.

WEAVER IN THE NEWS

You never know how the publicity’s going to manifest itself in the NFL. For former Boise State star Curtis Weaver, it came from a couple whiffs by Tim Tebow while attempting to block in Cleveland’s 23-13 win over Jacksonville last weekend. Tebow, lined up at tight end against Weaver, had his blocks described as “barely making contact” and “glancing blow” as Weaver blasted into the backfield. Tebow, of course, was released Monday. It just felt good to Weaver to be out there—he made two tackles in the game. He suffered a foot injury a year ago with Miami and was cut by the Dolphins, but he was picked up be the Browns.

Weaver spent the entire 2020 season in Cleveland and completed most of his rehab work inside the team facility. “It’s exciting,” defensive line coach Chris Kiffin told ClevelandBrowns.com in early May. “He bought in, and we all saw the change. Word spread around the building like, ‘Man, this guy might be something.’ He’s been fun. We’ve had him in the meeting rooms all year long and he’s a good personality.” That we already knew. Now we’ll see if Weaver sticks.

The weather forecast has cut the Albertsons Boise Open some slack. It’s going to be beautiful the next four days for the 32nd edition of the event, one of the original Korn Ferry Tour tournaments back in 1990 (when it debuted as the Ben Hogan Tour). The top 25 Korn Ferry players this season don’t have to fret about a PGA Tour card as they tee off this morning at Hillcrest Country Club. They’ve already secured one. But the other 125 players in the field are scrambling for 25 remaining PGA Tour cards (this is the first of three Korn Ferry Tour Finals events). Included are 20 PGA Tour winners with 34 total wins, led by Aaron Baddeley, Sean O’Hair and Camilo Villegas with four victories apiece.

Troy Merritt last played the Albertsons Boise Open in 2017, when he missed out on the FedExCup Playoffs and had to earn another PGA Tour card in the Korn Ferry Finals. The former Boise State star responded by tying for ninth, and he was right back on the big circuit the following season. Merritt doesn’t have to worry about that this season, as he is 69th in FedExCup standings and will be on the course today at the Northern Trust, the first leg of the FedExCup Playoffs. His last regular season tournament was two weeks ago at the Barracuda Championship, where he tied for 51st.

The Boise Hawks are now 0-10 against Missoula this year after the Paddleheads won 9-4 Wednesday night in the first of a three-game series. The Hawks were held to four hits—two of them were two-run homers in the fourth inning from Roby Enriquez and Tyler Jorgensen that accounted for all of Boise’s runs. And word is that Everett Sheen of the Idaho Steelheads has his new assistant coach. Keenan Kelly, a Boise native, returns home to be closer to family after serving as head coach of the Kenai River Black Bears in the North American Hockey League. Kelly replaces Steelies icon Scott Burt, who left last month to become head coach of the ECHL’s Rapid City Rush.

August 19, 2016, five years ago today: Jamaica’s Usain Bolt runs his final Olympic race, earning a gold medal with his teammates in the 4×100-meter relay at the Summer Games in Rio. The night before, Bolt had easily won the 200-meters to complete an unprecedented Olympic triple-double, victories in both the 100 and 200 in three straight Olympiads. He’s known as the fastest human being ever timed, the first man to hold the world record in both dashes. Bolt was an 11-time world champion before retiring in 2017.

On the ropes, the Broncos rally back big