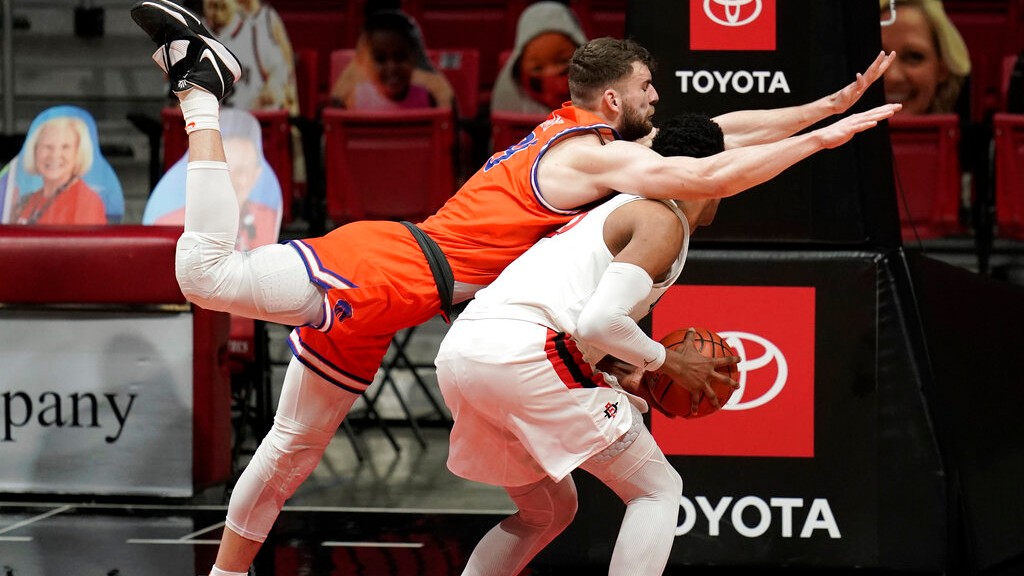 Boise State did so many things right in Saturday’s Game 2 at San Diego State. The Broncos played exceptional defense, out-rebounded the Aztecs by six, and were within one point three times down the stretch, but therein lies the rub. Boise State’s first-half offense went south for the second straight game, and it wasn’t all due to the vaunted SDSU defense. The Broncos bricked a bundle of three-pointers—many of them open looks—going 2-for-18 from deep. They shot 23 percent overall in the first 20 minutes. It was an unfortunate time for a clunker. When the shots were falling in the second half, Boise State would get key stops but couldn’t never get the lead. It added up to a 62-58 defeat and a highly-contested sweep at the hands of the No. 22 team in the country.

Game 2 was punctuated by Derrick Alston Jr. missing just about everything. Alston went 1-for-10 from the field and came up empty on all eight of his three-pointers before halftime, and it didn’t get much better after that. He scored seven points on a day when he could not carry this team as he has so many times before. “It wasn’t anything we did,” said Aztecs coach Brian Dutcher in the San Diego Union-Tribune. “He had a couple of clean looks, the first half especially, that just didn’t go in for him. He had an uncharacteristic off-shooting night, and we benefited from it.” Alston has had games like this, but not lately. He had averaged more than 26 points per game in the previous four games and had put up 29 against San Diego State last Thursday. It’s hard to imagine Senior Night being that difficult tomorrow.

It must be maddening for this team to have to keep hitting the reset button on its NCAA Tournament formula. After the sweep by San Diego State, the Broncos have the one makeup game left tomorrow night against Fresno State before Mountain West tournament time. They have to win that one, of course. If they do, many of the bracketologists still have them in the NCAA Tournament field as an at-large pick. But Boise State cannot go one-and-done next week in Las Vegas. Do you trust the NCAA Tournament selection committee? Here’s the way I see it: the Broncos need to win their next three. They need to dispatch the Bulldogs in ExtraMile Arena, win the quarterfinal game at Thomas & Mack, and take the semifinal matchup. They need to—for the first time—make the Mountain West championship game.

NOW THIS WAS A BOUNCE-BACK

After being stunned by a San Diego State three-pointer in the final seconds of a 74-72 loss Friday, the Boise State women posted their biggest margin of victory ever in a Mountain West game Sunday, blasting the Aztecs 85-44. Jade Loville led the Broncos with 20 points, but the team’s lone senior was the story of the game. Mallory McGwire added 18 points, seven rebounds, three steals and two blocks on Senior Day. Boise State has sealed a first round bye in the Mountain West tournament and will be off until then. The Broncos play next Monday in Las Vegas.

TWO BRONCOS WHO WORE NO. 3

Former Boise State stars Justinian Jessup and Anthony Drmic squared off as pros for the first time in Australia Friday, with Drmic’s Brisbane Bullets beating Jessup’s Illawarra Hawks 97-91. But what a game Jessup had. The Golden State Warriors second-round draft pick, guarded by Drmic occasionally, poured in a career-high 26 points on 10-for-15 shooting, going 4-for-7 from three-point range. In fact, Jessup even blocked a Drmic shot. Jessup is averaging 16.6 points per game, shooting 50 percent from the field and an amazing 54 percent from beyond the arc. Drmic, who scored 11 points for the night, is averaging 8.5 points per game. Drmic’s and Jessup’s Boise State careers didn’t overlap, but they did run back-to-back, and both wore uniform No. 3.

DICKEY ON THE ISSUES

Prater & The Ballgame landed the first long-form interview with Boise State athletic director Jeramiah Dickey Friday on Idaho SportsTalk. Three things stood out to me. The first: Dickey knows all about the east-side renovation of Albertsons Stadium. “It’s something that our fans seem to want—and that’s one we’ll take to the next level in terms of process,” said Dickey. The second: his response regarding a move to the American Athletic Conference. “We have to take care of the controllables before we look outside the Mountain West,” Dickey said. “The Mountain West is our home, and we’re happy. But I’d be a bad AD if I wasn’t always looking to the future.” The third is a pointed challenge to Bronco Nation on the subject of attendance. That’s an issue dear to my heart, and I’ll address it down the line. I need some room for that.

Now that we’re two decades in, ESPN’s Bill Connelly has ranked college football’s top 60 quarterbacks of the 2000s. Boise State’s Kellen Moore was No. 14. And before you say that’s a rip-off, Moore was ahead of luminaries like Andrew Luck, Russell Wilson, Ben Roethlisberger, Eli Manning and Aaron Rodgers. “50-3. Fifty and three!” writes Connelly. “That was Boise State’s record with Moore behind center. The Broncos went 6-0 against power conference teams, and two of their three losses were to teams with QBs on this list (Colin Kaepernick’s Nevada, Andy Dalton’s TCU). Ruthlessly efficient for four straight years.” Kaepernick was No. 29 and Dalton was No. 59. At the top of the list was Oklahoma’s Baker Mayfield.

Sure, the Idaho men’s basketball team lost 71-61 to Montana State Sunday in Memorial Gym for its 20th loss of the season. But Friday and Saturday on campus more than made up for it. First, Vandals hoops finally recorded win No. 1 on the season afteran 0-19 start with a 74-69 victory over the Bobcats. Then Idaho opened the Big Sky football season by rallying for a 28-21 win over rival Eastern Washington, the Vandals’ second straight triumph over the Eagles. Quarterback Mike Beaudry hit wide receiver Hayden Hatten for the game-winner from 25 yards out with 54 seconds left in the game. Props to the Idaho defense. EWU’s Walter Payton Award candidate, Eric Barriere, threw for 339 yards, but it took him 57 attempts to do it, and his completion percentage was a pedestrian 56 percent.

March 1, 1997: If not the biggest, it’s the most visible fight in the career of one of Idaho’s most popular boxers ever, Kenny Keene. The Emmett Eliminator fought on the undercard of a Sugar Ray Leonard-Hector “Macho” Camacho bout in Atlantic City. Keene lost the IBC Cruiserweight title to Robert Daniels in a 12-round slugfest, with the split decision booed lustily by the crowd of 10,000. Keene’s career would last 19 more years—he would go 51-4 overall with 28 knockouts.

Imitating bayou air the best they can