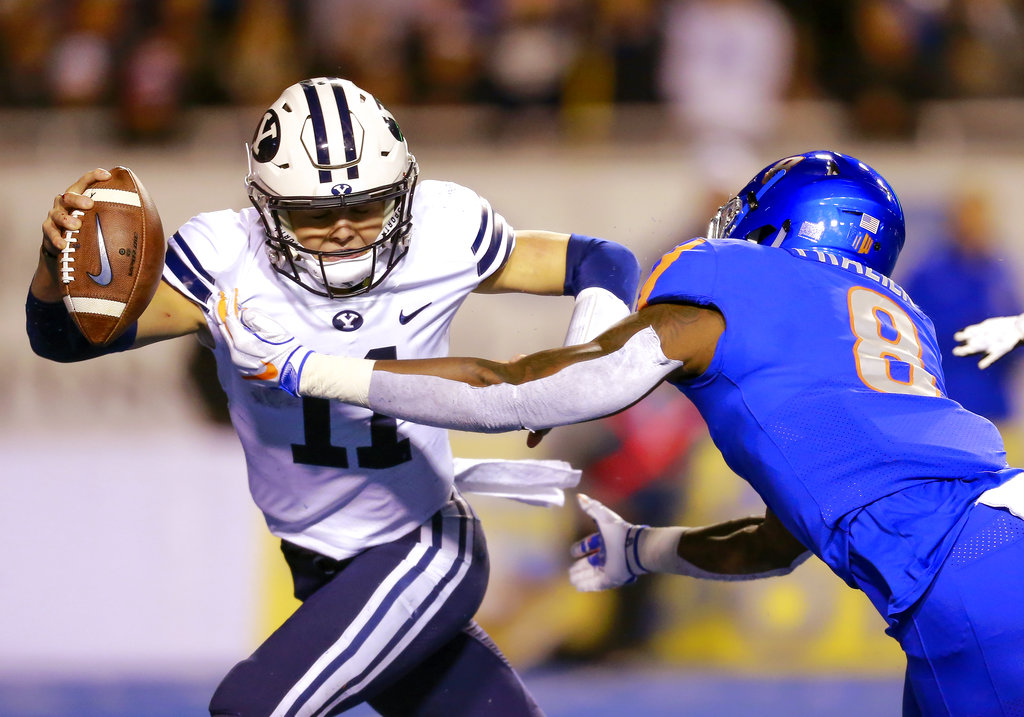 Zach Wilson gets juices flowing around here, and why wouldn’t he? It goes beyond the BYU quarterback’s exceptional skills on the field, qualities that have him in the Heisman Trophy conversation. Wilson jilted Boise State almost three years ago when he reneged on a commitment to the Broncos’ 2018 recruiting class. It happened exactly one week before the NCAA’s first early signing day in December, 2017. And it was three days after Broncos coach Bryan Harsin and then-offensive coordinator Zak Hill had been sitting in the Wilson family’s living room on a home visit. Wilson had received an offer from BYU. “Sometimes life presents opportunities that need to be considered,” Wilson tweeted. “Especially when it impacts my family, which is number ONE on my priority list.” That was the giveaway.

Maybe it’s water under the bridge now. Maybe it’s not. “There was a lot of fallout from that decision,” said Eric Kjar, Wilson’s high school coach at Corner Canyon in Draper, UT, in the Deseret News. “Those guys (at Boise State) were not happy. In fact, they were (ticked off) royally. It was tough on them, because they had stopped recruiting quarterbacks since Zach had committed back in April. He was going to be their guy. They were sure of it.”

WILSON IS GOOD AT FOOTBALL

Boise State beat the Wilson-led Cougars on the blue turf the following November—barely. He was injured last year when BYU upset the Broncos 28-25 in Provo. Now, Boise State is the underdog, and Wilson is a primary reason. He has stretched his dual-threat ability to the max, rushing for seven touchdowns and throwing for 19 (against just two interceptions). He’s extremely accurate, as he has completed 74.6 percent of his passes. Wilson might not look tall on TV, but he’s 6-3, and he has the arm strength to match. He’s averaging 15 yards per completion this season. What can you say?

AN OFFSHOOT OF WILSON’S FLIP

It was late in the game for the recruiting of quarterbacks when Wilson decommitted. Boise State finally landed Riley Smith out of St. Augustine, FL. Smith has since transitioned to tight end, and look at him now. He’s 6-4, 225 pounds, but he still has residual running ability, and offensive coordinator Eric Kiesau has taken advantage of it on tight end reverses. Smith has only one catch for 16 yards, but he has rushed three times for 35 yards. Kiesau has used his tight ends liberally—John Bates has 10 catches for 84 yards over the first two games. Tyneil Hopper, who’s still looking for his first career reception, has been a capable run-blocker.

1,000 OF THE BRONCOS’ CLOSEST FRIENDS

Central District Health has unanimously approved Boise State’s request to allow up to 1,000 people into Albertsons Stadium for Friday night’s game. The university also asked that the Colorado State matchup next Thursday and the home finale versus San Jose State on Thanksgiving weekend be included, but approval for the other two games will be made at the discretion of the director. The throng this week includes 100-200 immediate family members, 500 students (selected in a random drawing), 275 members of the band and cheer squad and 30-40 security staff members, masked, tested and socially-distanced in a 36,000-seat facility.

A BALLOT CAST FOR THE JAY-TRAIN

Voting is wrapping up for the running backs on Boise State’s All-Decade team (it ends at noon today). This is a stacked category. Your candidates (in alphabetical order): Jay Ajayi, D.J. Harper, George Holani, Doug Martin, Alexander Mattison and Jeremy McNichols. Two of them are currently in the NFL (Mattison and McNichols), and two others made it (Ajayi and Martin). It’s hard not to settle on Ajayi, who set the Broncos’ single-season records in 2014 with 1,823 rushing yards and 28 touchdowns. Boise State rode Ajayi down the stretch and into the Fiesta Bowl, where the Broncos beat Arizona while he was running for 134 yards and three TDs.

THE BIG SKY HAS A SCHEDULE

There will be Big Sky football in the spring, and the conference seems to have a pretty solid plan. Twelve teams will participate (Sacramento State has opted out), playing six games apiece over an eight-week period. Two bye weeks are built in to account for any re-scheduling necessary due to COVID-19 interruptions. Idaho opens with Northern Colorado in the Kibbie Dome, and Idaho State begins at home versus Weber State on February 27. Then the Vandals and Bengals face off against each other at Holt Arena in Week 2. The Big Sky season ends on April 10, and the FCS Playoffs begin two weeks later.

ALSTON IS BEING WATCHED

We’re always chronicling the national watch lists for Boise State football, but it doesn’t happen that often in men’s basketball. Derrick Alston Jr. has again made the cut, though, for the 2021 Julius Erving Small Forward of the Year Award. Alston was one of 10 finalists for the honor last season and is one of 20 semifinalists right now. Alston led Boise State last season with 17.3 points and 3.1 assists per game and added 5.2 rebounds. He initially declared for the NBA Draft last spring but withdrew his name in July. Voting for what we’ll call the “Dr. J Award” begins Friday.

November 5, 2011: Boise State’s Kellen Moore becomes the winningest quarterback in college football history as the Broncos beat UNLV in Las Vegas, 48-21. Moore picked up his 46th victory, eclipsing the record held by former Texas star Colt McCoy. Moore put an exclamation point on the milestone night by throwing five touchdown passes for the fifth time in his career, and 12,000 Bronco fans ventured down to Sam Boyd Stadium to see it. Kellen’s final count, of course, would be 50-3.