It looked for a while like it was actually going to happen: Gonzaga to the Mountain West. It was a natural, it seemed—higher RPI, much bigger arenas, traditional powers (San Diego State, UNLV, New Mexico) and rising powers (Nevada, Boise State). The Zags’ NCAA Tournament resume would strengthen, and the need to sweat out an at-large berth when needed would lessen. But over the weekend, perhaps sensing that things weren’t going well, Mountain West commissioner Craig Thompson got out in front of it and said the Gonzaga move doesn’t look promising. “I’d put it like this: Today is today, none of us can predict tomorrow,” said Thompson at the Final Four Saturday. But if the Gonzaga thing was going to happen, it would have been now.

Chris Murray of the Reno Gazette-Journal produced this Mountain West vs. West Coast Conference synopsis: “The MW ranked ninth out of 31 conferences in RPI this season; the WCC was No. 13, a figure buoyed by Gonzaga. The MW had four top-100 RPI teams and six in the top 120. The WCC had only three top-120 RPI teams, which included Saint Mary’s, which failed to get an NCAA Tournament at-large berth despite winning 28 games, a major snub to the WCC. On the other end of the spectrum, the MW had only two sub-250 RPI teams compared to the WCC’s four.” The WCC’s reduction to 16 conference games and realigned tournament format aren’t going to change that. But a more Zag-friendly financial situation will protect the Bulldogs’ pedestal—and make it harder for anyone else to reach.

Well, Boise State’s final takeaway from its 2017-18 men’s basketball season will be that the Broncos beat a Final Four team. All that’s left now is to toast Loyola Chicago, who couldn’t hang on against Michigan Saturday and move on to make history in tonight’s national championship game. “Ran out of gas” may be a sports cliché, but it seems apt in describing what happened to the Ramblers after they led 41-31 with 14 minutes left—and lost 69-57. Loyola finished 32-6, with its worst loss (by far) coming at Boise State the week after Thanksgiving. The 87-53 defeat marked the only time the Ramblers allowed more than 80 points this season. The Broncos can at least get a Sister Jean bobblehead for their trophy case.

As Brett Rypien enters the final two weeks of spring football in his Boise State career today, the revelations of his uncle over the weekend have to be weighing on him a little. Mark Rypien, the Super Bowl-winning quarterback who played at Washington State, told KHQ-TV in Spokane he suffers “from a complex stew of mental health conditions” that he attributes to head trauma from his 11-year NFL career. To Brett, Mark has not only been an uncle, but a mentor and one of his biggest fans. It must be noted that the game has never been safer and that Brett has gone through his college career generally unscathed, save for the jarring hit he took at, ironically, WSU last September when he was sacked by the Cougars’ Frankie Luvu. Here’s hoping Rypien can focus on his love of the game and his excitement for his senior year.

Leighton Vander Esch will be one of nine former Broncos participating in Boise State’s Pro Day tomorrow, the second-to-last such campus audition of the year in the FBS. With the Mountain West Defensive Player of the Year continuing to climb the mock draft boards, he could easily sit out tomorrow’s festivities and let his strong NFL Combine performance speak for itself. But that’s not in Vander Esch’s DNA. It harkens back to what he said after the Combine. “The most important time is still coming up,” Vander Esch told Idaho SportsTalk a month ago. “I’m not backing off one bit.” Mel Kiper Jr.’s latest mock draft at ESPN.com moves Vander Esch up to No. 23 overall, going to the L.A. Rams.

It’s hard to steer the spotlight away from goalie Tomas Sholl as the regular season winds down for the Idaho Steelheads. Sholl picked up two more victories over the weekend—he has now won eight straight starts—as the Steelheads swept the Utah Grizzlies in the final regular-season homestand at CenturyLink Arena. They won 5-0 Friday night as the red-hot Sholl logged his fourth shutout in six games. The Steelies and Sholl followed up with a 4-2 triumph Saturday night. Sholl is now 8-0-1 with Idaho and 13-0-2 overall this season. Cole Ully has the hottest stick for the Steelheads, tallying twice Saturday night to extend his goal-scoring streak to four games.

Troy Merritt’s sights are certainly set higher, but he continues to play through the weekend on the PGA Tour—and consequently continues to make a nice living. Merritt shot an even-par 70 yesterday in the final round of the Shell Houston Open, finishing in a tie for 43rd and earning $20,860. Merritt’s second round Friday was bizarre. The Meridian resident and former Boise State standout recorded two double-bogeys and one bogey—and eight birdies to come in three-under for the day and make the cut.

One of the more prestigious track and field meets on the West Coast every spring is the Stanford Invitational, and Boise State’s Allie Ostrander turned it on its ear Friday. Ostrander smashed the meet record and ran the fastest time in the world this year in the 3,000-meter steeplechase, clocking a 9:38.57. It was also the 14th-best time in NCAA history. Ostrander dealt with a relatively warm day (temperatures in the low 80’s) in her own inimitable way, embracing the inevitable splashing during the water jumps. “I actually look forward to it,” said Ostrander. “Like, yes—a little pool party, get that goin’! So it’s nice, especially when it’s hot.” Meanwhile, the Broncos’ Yusuke Uchikoshi won the men’s steeplechase title at Stanford with a school-record 8:38.32.

There were more former Boise Hawks on Opening Day rosters last Thursday than in any year I can remember—25 of them. All were part of the Cubs system. The forever memorable ones are Chicago’s Kris Bryant and Kyle Schwarber, assigned to Boise in 2013 and 2014, respectively, after going No. 2 and No. 4 overall in the MLB Draft. Bryant, of course, has gone on to National League Rookie of the Year and MVP honors. Also notable is former American League MVP Josh Donaldson of Toronto. The Hawks are going into their fourth year of affiliation with the Colorado Rockies, who have sent a couple major leaguers to the Hawks on rehab assignments. But none of the minor leaguers who have come through Boise with the Rockies organization has made the bigs yet.

It was more amazing than George Mason in 2006—and at least as amazing as Butler’s first run to the national championship game the year before. Virginia Commonwealth was playing in the Final Four. The NCAA Tournament Committee had been roundly criticized by national hoops analysts for even selecting VCU to the Dance after the Rams had finished fourth in the Colonial Athletic Association during the regular season. But they went from First Four to Final Four in a dizzying 12-day stretch, capped by a stunning 71-61 win over top-seeded Kansas in the Elite Eight. And lo and behold. It would be Butler who would finally eliminate the Rams 70-62 to advance to the national championship game versus Connecticut.

This team’s pretty good with Hutch, RPI and all 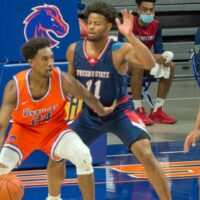