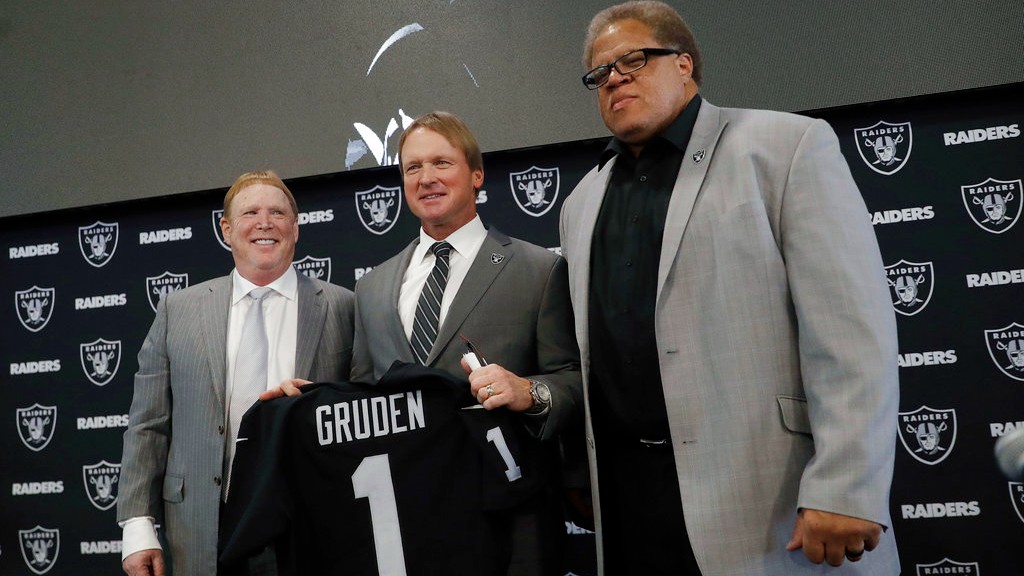 January 6, 2018, five years ago today: Jon Gruden departs the ESPN broadcast booth for the final time, having been hired to return to the Oakland Raiders, the team he had coached from 1998-2001. He would officially be introduced by the Raiders at a press conference three days later.Gruden had been an analyst on Monday Night Football since leaving the Buccaneers after the 2008 season. His final telecast was a Wild Card playoff game between Tennessee and Kansas City, which was about to become his rival in the AFC West.

Gruden was lured back to the sideline by a 10-year, $100 million contract with the Raiders, the richest for a coach—and matching the longest—in NFL history. Oakland had some unfinished business, having not seen Gruden’s first stint with the team through to fruition. In a bizarre move in 2002, Gruden was traded by the Raiders to Tampa Bay for two first-round draft picks, two second-rounders and $8 million in cash.

Gruden promptly led the Buccaneers to their first NFL championship in an ironic 48-20 win over Oakland in Super Bowl 37. In the process, the 39-year-old Gruden became the youngest coach to that point to win a Super Bowl (the current record-holder is Pittsburgh’s Mike Tomlin, who was 36 when the Steelers were victorious in Super Bowl 43.) Gruden left the Bucs after the 2008 season to take the ESPN job.

He became a popular broadcaster. During the weeks leading up the NFL Draft every year, Gruden hosted “Jon Gruden’s QB Camp” on ESPN, where he grilled NFL quarterback prospects while watching tape. One of them was Boise State great Kellen Moore in the spring of 2012. Moore’s session was different. Gruden gave him kudos as “a football wizard” (with a goodly dose of humor). In one segment, Gruden shuttled rapid-fire through about 10 different Boise State formations and shifts on tape. “You guys are nuts,” he told Moore. Gruden’s closing line on the show as the two walked off the practice field: “I wish I could spend about three days with you.”

Gruden’s second run with the Raiders did not go as well as the first. He was 4-12 in his first season and improved to 7-9 in his second and 8-8 in his third. The 2021 campaign began well enough, with a 3-0 start in the franchise’s second year in Las Vegas. But in October of that year, a series of emails that Gruden had written was uncovered. Racist, misogynistic, and homophobic slurs dotted the communications throughout, and he was forced to resign five games into the season.